Can science save the last two white rhinos left on the planet? (Kenya)

By NewsroomMarch 5, 2020Conservation, Science and technology
No Comments

Northern white rhinos no longer exist in the wild. The last two remaining female individuals are under constant surveillance in Kenya while scientists are working on groundbreaking techniques to save the species from complete extinction.

Najin and her daughter Fatu are under intense surveillance in their 700-acre (about 280-hectare) enclosure at the Ol Pejeta conservancy near the town of Nanyuki, on the equator in central Kenya. Their head caregiver, Zacharia Mutai, says his team considers them as family members.

“We know them very well and must ensure that they are healthy and well looked after.

“Having the last two is something very serious. We are trying all our best to protect and preserve them. We don’t want to face extinction any more.”

Mutai was the caregiver of Sudan, the last male northern white rhino, which died in 2018.

The two remaining females, 31-year-old Najin and 20-year-old Fatu, are clinically infertile and cannot carry a pregnancy. Furthermore, Najin has a large tumour on her right ovary and Fatin has a damaged uterus. 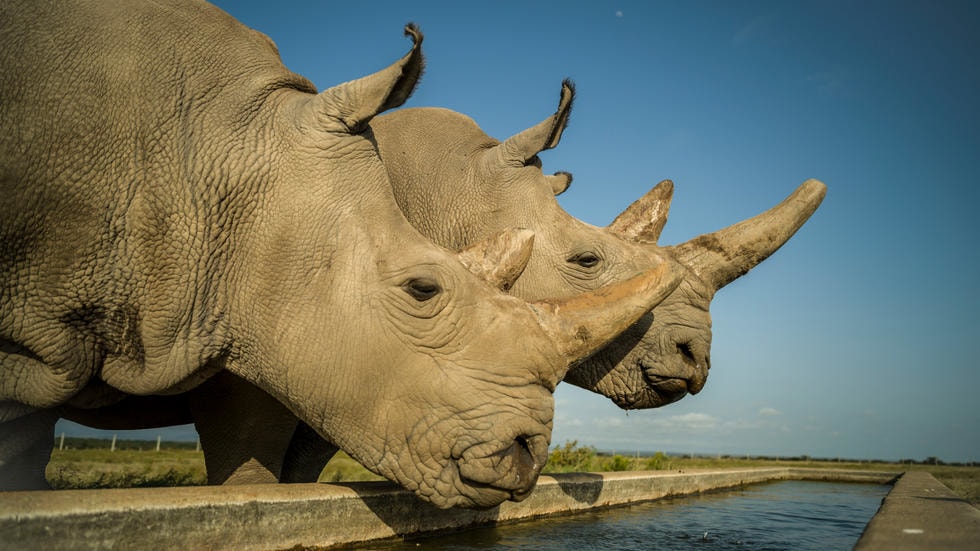 Original photo as published by RFI: Najin (L) and Fatu (R) are the last two northen white rhinos in the world. The two female rhinos at the Ol Pejeta conservancy in Kenya. (Ami Vitale/BioRescue)

In order to save the species from extinction, scientists are working on artificial reproduction techniques which have never been attempted with rhinoceros before.

The efforts are pioneered by the BioRescue project at the Leibniz Institute for Zoo and Wildlife Research (Leibniz-IZW) in Germany. The team of international scientists are using in vitro fertilisation (IVF) and stem cell technology for reproduction purposes.

“We have collected a lot of semen from four different northern white rhino bulls over the last 20 years,” says Professor Thomas Hildebrandt who heads the BioRescue project.

“This frozen semen allows us to do in vitro fertilisation and we hope to combine that approach together with groundbreaking stem cell technology.”

Hildebrandt, a veterinarian specialised in the reproduction of wild animals, hopes that the combined technology will help produce a viable population that could be released into the wild within 15 to 20 years.

Last year, in a unique procedure at the Ol Pejeta conservancy, his team managed to collect the eggs from Fatu and Najin, but only three embryos from Fatu’s eggs have managed to survive.

“So, our timeline for that is about three years from now,” he added.

The embryos are ready for transfer into surrogate southern white rhinos mothers. Hildebrandt hopes that it will happen before the end of 2020. It will then be followed by a gestation period of 16 months.

Meanwhile in Kenya, Stephen Ngulu, the wildlife vet at the Ol Pejeta conservancy, told RFI that Najin and Fatu are scrupulously monitored.

“I have to observe their walking, their skin, check the eyes, teeth, feet or any wounds. I collect blood and we will test for various parasites, bacterial and viral diseases.”

The technique, inspired by the work of the 2012 Nobel Prize-winning stem cell biologist Shinya Yamanaka, has only been performed on lab mice, but “nobody has been capable, so far, to do that with two-ton species like the rhino.”

“We have not only harvested sperms from the four different northern white rhino bulls but we also collected skin samples from 12 unrelated individuals.

“We have the best scientists on board and we hope to make significant progress in this field in the next three to five years,” Hildebrandt told RFI.

“It is very ambitious, but without dreams you can’t change the world.”

Extensive poaching and civil war led to their near extinction. Najin and Fatu were born in captivity and brought to Kenya in 2009 from the Dvur Kralove Safari Park in the Czech Republic.

The world’s two remaining northern white rhinos live under the constant surveillance of 42 armed guards from the National Police Reservists.

“We have a system where we can track the walkie talkies of the patrols. We have night vision, we have thermal images,” explains Emilio Gichuki at the Ol Pejeta conservancy.

He added that poaching is still an acute problem which they are trying to resolve by involving the neighbouring communities.