Can we stop calling it biodiversity? There’s no word for what we’re losing 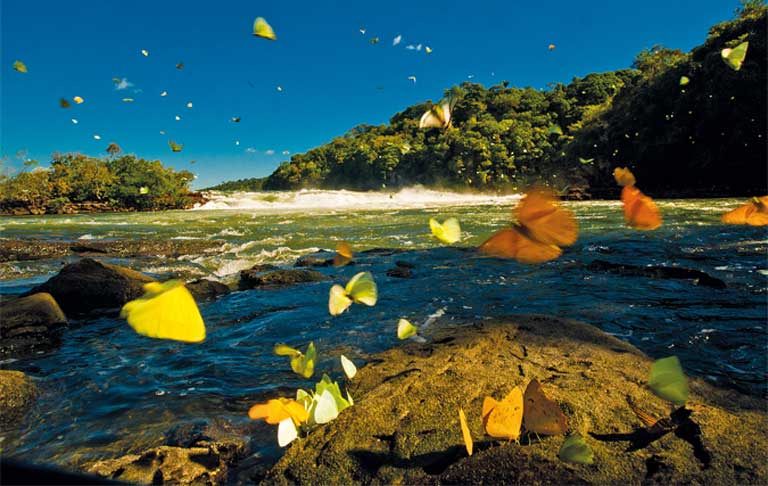 Butterflies burst into the sky above an Amazonian river. Image: As originally published by Mongabay.

In an August 26, 2021 article appearing here at Mongabay, Ashoka Mukpo detailed some of the controversies over Indigenous land rights brewing in the run-up to the October kickoff of the Fifteenth United Nations (UN) Conference of the Parties to the Convention on Biological Diversity, or COP-15.  COPs have been meeting since 1994, discussing issues and shaping policy goals pertaining to the parties’ core 1992 Convention (now ratified in some form by most countries in the world).  Signatories have agreed to take various steps to preserve “biological diversity,” a term now usually shortened to “biodiversity.” During the upcoming COP-15, attendees will discuss adopting a new “Post-2020 Global Biodiversity Framework,” an aspirational and sweeping environmental policy package which was drafted following the UN Summit on Biodiversity of 2020.

That 2020 conference also generated the “Leader’s Pledge for Nature,” now signed by over eighty heads of state. In this pledge, signatories commit to the “transformational” Post-2020 Global Biodiversity Framework, which they attest will lead them to “address the direct and indirect drivers of biodiversity loss and halt human induced extinction of species” as well as move them toward solving every conceivable environmental problem, from food security to wildlife trafficking to “greening” the international financial system.

Another high-level multilateral meeting centered on “biodiversity” conservation is now underway in Marseilles, France, the World Conservation Congress hosted by the International Union for the Conservation of Nature (IUCN), running from 3 – 11 September 2021.  This conference promises, per its website, to “drive action on nature-based recovery, climate change and biodiversity for decades to come.”

These UN- and IUCN-led efforts are prominent examples of the seeming return, with a vengeance, of the long-controversial and fundamentally perhaps indefinable term “biodiversity.” The term was defined in the original 1992 Convention (page 5) as follows: “’Biological diversity’ means the variability among living organisms from all sources including, inter alia, terrestrial, marine and other aquatic ecosystems and the ecological complexes of which they are part; this includes diversity within species, between species and of ecosystems.”  A sense of its fluidity as a term is already apparent here, and likewise a sense of how difficult it would be to make what is inherently a comparative term (centered on “variability”) the focus of clear policy or action. It is unapologetically scientific as a term, yet somehow without quite achieving scientific clarity or parsimony.

The term has been in and out of favor among environmental thinkers since it was popularized in the 1980s by, among others, the biologist E. O. Wilson. Not only in proclaiming “biodiversity” a viable key concept for mega-scale action, but also in much of his other writing, Wilson, an entomologist by training without any clear grounding in history, politics, economics, or security studies, exudes confidence that scientists are the natural stewards of Earth.  He has exerted a great deal of influence over technocrats and environmentalists in the past few decades, including those who support the so-called “30 x 30” project (which has also been put into the Post-2020 Biodiversity Framework) and those who support Wilson’s own “Half-Earth” project. Wilson’s proclamations on the future of Earth tend toward being spectacles of neo-Romantic abstraction.  As environmental thinker Lisa Sideris wrote, there is little sign that “nature” in Wilson’s writings is anything “more than an abstract set of principles, a foil for our grand intellectual adventure” as humans, even where Wilson is ostensibly discussing the need to save the planet (cf. page 78 of her 2017 work Consecrating Science).

More than a tinge of hollowness and over-abstractness seems to attach to Wilson’s term, biodiversity, as well. Meeting the goal of more or better biodiversity is not easy to translate into the terms in which we speak of those human political, economic, and security realities which have both shaped the despeciation and removal of wild nature, and which must drive any meaningful reversal thereof. Biodiversity seems like the point of view of a roving scientific eye, or of no real person or eye at all. This comes at a time when governments desperately need environmental ideas to pack a strong political and security punch. Governments dwell in a stark world of domestic “jobs” mania and other short-term political issues, not to mention international risk, realpolitik and warfighting.  This is the arena where notions like prioritizing biodiversity must actually survive or perish. For a government to actually disturb the status quo of profit-seeking and rent-seeking, which is vital if we are to head off environmental collapse over the medium-term, they require more compelling concepts than “biodiversity.”

As it stands, governments seem to be increasingly pliant to, and/or sometimes indistinguishable from, mega-profit seekers such as powerful corporations, individuals, cartels, political parties, or anyone else able to buy custom-tailored political and economic policy outcomes. Governments unwilling to take a stand on the principle of their duty of care to all living things within their borders are a crucial part of the extinction problem. Yet “biodiversity” is apparently a principle perfectly compatible with mega-corporations and the global financial system remaining in charge.  These actors are even touted as part of the biodiverse future, via “green finance,” and “green growth” technologies like solar panels and battery-powered cars (ignoring studies which assess these technologies are equally as damaging and destructive as fossil fuels). To try to plug a biodiversity agenda into the existing dilapidated array of governments and their profiteering overlords seems, in short, politically and ethically naïve or suspect.

Finally, and most fundamentally, biodiversity constructs a wild nature which is not truly wild, not truly beyond our reason’s grasp, and in this does perhaps the worst disservice of all to the cause it is trying to advance.

Earth is part of an immeasurably complex and deep physical reality.  Intact wild nature on Earth gives us direct, immersive contact with this reality in a way that literally nothing else can. Just like the infinite universe around us – whose depths we will never directly observe due the finite speed of light, let alone begin to fully understand – intact wild nature on Earth is inestimable.  We assess we have successfully reconstructed some surface aspects of the formation of our observable pocket of the universe by describing it using imagined, grossly simplified and idealized models of the way matter or energy (more abstractions) evolve through time. But for all the models we run based on these laws, we remain fully ignorant about any aspect of the universe, including its very existence, which we cannot enter into these models as the application of a law, a change of variable, or some other logical relation.

Likewise, although regarding our Earth, we have reconstructed some of the things we think “run” the planet according to our metaphors, our models of it using supercomputers, our ways of photographing and tracking it using a plethora of cameras, sensors and monitors, or our biological and ecological and geological scientific descriptions, these still only scratch the surface of what is. They are still necessarily limited, sketchy, and abstract schemas proclaiming their small truths amidst infinite complexity beyond them. We like to shine the light here and there on a thread in this dense fabric of the wild universe which we think we can understand. We are fond of constructing an imagined view of our whole planet based only on these schematic threads, forgetting it is only a view and only schematic. The full extent of the hows and whys of our planet’s wild nature and the universe in which it sits, all the ways it exists and permits life to flourish, are unknowable via science.  We can still treasure and try to gently advance the small threads we have traced into knowledge of this infinitely complex world, without ever mistaking what results from a full understanding.

Ultimately, the Earth is part of that whole, that full infinite universe, which we also cannot fully understand, that universe which will always remain beyond the grasp of us for whom a completed, real infinity is a contradiction, a paradox.  Wild intact nature will always remain a place of ignorance and mystery for us, and this is part of its chief value. When we destroy it, any piece of it, no matter how many or how few species it contains or whether they are rare or common, we do not know, we cannot articulate, what it is that we are doing, what it is that we destroy.

This has been touched upon by environmental thinkers like Sideris, Crist, Guevara, Campagna, and Lubarsky (cf. e.g. Crist’s Abundant Earth (2019); Sideris’s Consecrating Science (2017); and Campagna & Guevara, “Conservation in No-Man’s-Land,” and Lubarsky, “Living Beauty,” in the 2014 anthology Keeping the Wild).  Intact wild nature at any scale, cosmological or earthly, is not an identifiable, quantifiable system, a conglomeration of identifiable “stuff,” or some hyper-rationalizable, pseudo-Spinozan Nature in which we can somehow directly participate all the way to the top via reason. Our reason is poor, next to it. It is incomplete, radically so. Our language is poor, next to it. We cannot articulate what intact wild nature is because it is what shaped our entire perception and use of language, just as it shaped our minds and our hearts, carving and crafting them out of an ape’s.

We cannot explain why, but amidst our fear, discomfort and wonder at wild nature as a point of contact with the unknown and unknowable, the infinite and the sublime, we can also find love for the wild universe. This love is a positive source of strength for the human spirit, strength that can translate into action. Belief in or adherence to a concept like “biodiversity” is a source merely of more hubristic managerial assertiveness, including (per Mukpo’s article) vis-à-vis those Indigenous peoples who still live within intact wild nature and who are the last people who need to be disturbed right now. This love is a source of strength allowing us to speak truth to those in government, elect leaders who also possess it, and demand they enact a duty of care for all beings inside their borders. This love is the strongest, least entropy-raising piece of us, with respect to nature no less than with respect to one another.

In intact wild nature lies the whole key to why we are here, on every level, and understanding and decoding what it can show us is an ongoing process. When we destroy intact wild nature we close the door on this continued evolution of ourselves. We destroy the possibility of direct immersion in our own vast ignorance, the necessary prequel to progress and greater self-awareness, and one day to finally realizing a return to a path which is livable for all species. “Biodiversity” may be one of the multitude of glad outcomes of this path being found, but it is not the right concept to equip us for the steep, necessarily social and political uphill climb to find it.