Captive breeding of Sumatran rhinos: Where the program stands today

By NewsroomSeptember 5, 2021Conservation
No Comments 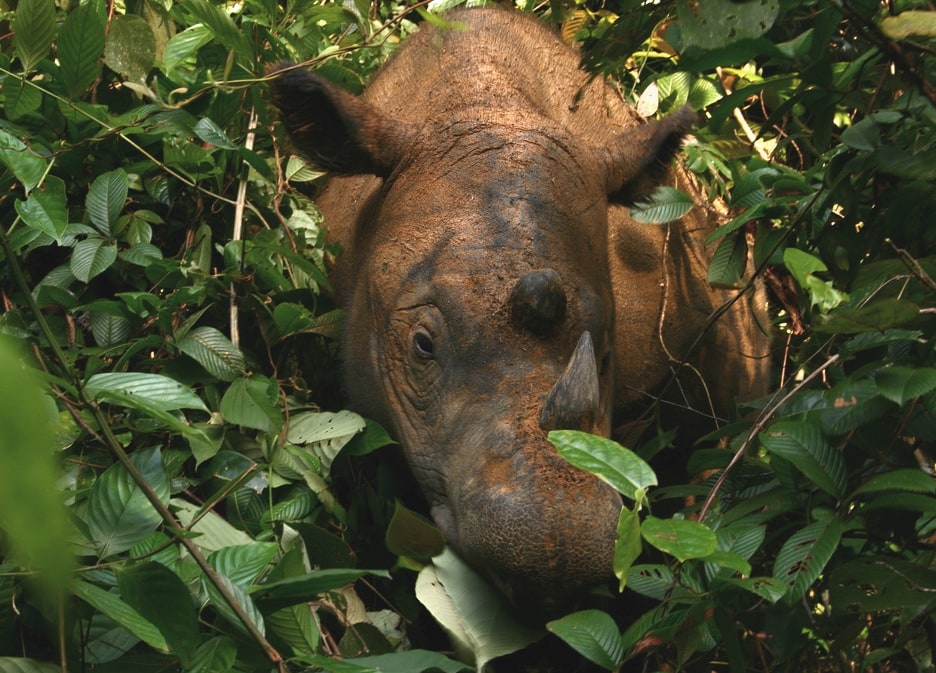 Indonesia is today home to the last holdout populations of Sumatran rhinos, a species that once ranged across much of southern Asia.

Official figures, which paint a more optimistic picture than many independent experts, put the species’ population at fewer than 80 individuals. The vast majority of these are in three habitats: up to 50 in northern Sumatra’s Leuser Ecosystem, up to 20 in Way Kambas National Park in southern Sumatra, and up to 10 in Indonesian Borneo, known as Kalimantan. (A handful of rhinos might also persist in Sumatra’s Bukit Barisan Selatan National Park.)

With numbers so low and populations so fragmented, a consensus has formed among experts and officials that efforts to breed Sumatran rhinos (Dicerorhinus sumatrensis) in captivity must be intensified. An existing center, in Way Kambas, is home to seven rhinos, including two calves born there. In 2018, a rhino was captured in Indonesian Borneo and taken to a second center in the Kelian Protected Forest in East Kalimantan province. And plans are underway to open a third center in the Leuser area.

Conservationists intend to capture six more rhinos across the three ecosystems, united into a single nationwide breeding program. However, COVID-19, which has battered Indonesia, has caused complications and delays.

To get the latest updates, Mongabay spoke to conservationists and rhino experts active in each of the three primary Sumatran rhino habitats. These conversations revealed fears about the dire state of the species and its remaining populations, as well as optimism that experts and officials are working with united purpose to bring the Sumatran rhino back from the brink of extinction.

Way Kambas, at the southern end of Sumatra Island, hosts both wild rhinos and the seven captive rhinos at the Sumatran Rhino Sanctuary. Two calves have been born at the SRS, one in 2012 and one in 2016, both from the same parents. Efforts since then have failed to result in live births. Zulfi Arsan, senior veterinarian at the SRS, says one female, Rosa, has miscarried seven pregnancies since 2017. While the primary focus at the SRS remains natural breeding, experts are studying how assisted reproductive technology, including artificial insemination, might be used with the rhinos held at the Way Kambas SRS and other centers. Plans are also underway to capture some of the wild rhinos in Way Kambas, but have stalled due to COVID-19.

The Kelian Lestari sanctuary in the Bornean province of East Kalimantan has hosted a solitary rhino, a female named Pahu, since she was captured in 2018. Veterinarian Benn Bryant of the Taronga Western Plains Zoo in Australia says Pahu is generally in good health, and that camera-trap evidence suggests she has previously given birth. However, she currently has reproductive abnormalities that likely render her unable to reproduce, including a problem with one of her ovaries. Meanwhile, another female, given the name Pari, has been identified on camera traps. Authorities intend to capture her as well, but — as elsewhere in Indonesia — those plans are indefinitely on hold due to the pandemic.

The Leuser Ecosystem is home to what is believed to be the largest remaining population of wild Sumatran rhinos. Or, as Barney Long, senior director of Re:wild puts it: “There’s two parts of Leuser. There’s a part with a population of rhinos and there’s a part with a handful of individual rhinos.” In keeping with a pattern in place since 2020, COVID-19 has resulted in delays to plans to capture rhinos and open a new captive-breeding facility near Leuser. When work is able to resume, efforts will focus on capturing some of the scattered individuals rather than on rhinos from the breeding population.