Carcass of last Sumatran rhino to be preserved (Malaysia)

By NewsroomNovember 26, 2019Conservation
No Comments

KOTA KINABALU: The Sabah Wildlife Department (JHL) plans to preserve the carcass of Iman, the last surviving Sumatran rhino in Malaysia, which died on Saturday afternoon, and hand it over to the Sabah Museum.

Sabah Wildlife Department (SWD) Director Augustine Tuuga said the carcass is still at the Borneo Rhinoceros Sanctuary in the Tabin Wlidlife Reserve in Lahad Datu. “We will try to preserve (the carcass) and I plan to hand it over to the Sabah Museum,” he said Sunday. 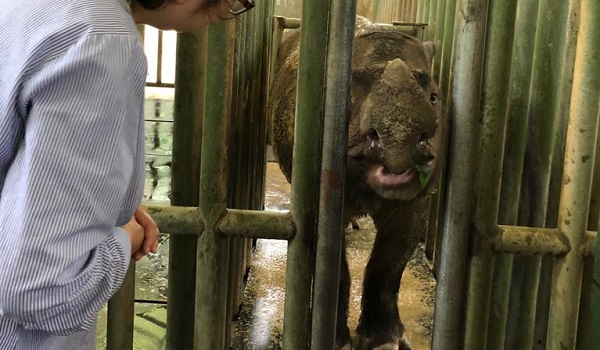 Iman was captured in 2014 in the Danum Valley, Lahad Datu and is estimated to be 25 years old. The female rhinoceros’s death at 5.35pm on Saturday was announced by the Sabah Wildlife Department in a statement.

Iman’s death marked the extinction of the species (Dicerorhinus sumatrensis) in Malaysia.

According to Tuuga, she died due growing pressure of a tumour into the bladder

Tuuga said the move to preserve the carcass is for it to be exhibited at the Sabah Museum to provide information to the public on the existence of the species in Malaysia, especially in Sabah.

“We want to make it known that we used to have the species in Malaysia, and it (Iman) was the last,” he added.

He said Iman’s carcass would be preserved like that of Tam’s, the sole surviving male Sumatran rhino, which died last May due to old age and multiple organ failure stemming from kidney and liver damage.

Tuuga said the egg cells, which were harvested from Iman, were still preserved and the department hoped to collaborate with the Indonesian government to provide new rhinoceros sperm to infertilise the eggs through the in-vitro fertilisation (IVF) method.

Last October, the preserved Sumatran male rhinoceros’ carcass was on display at the Sabah Museum in conjunction with the “Head of State and Tam, The Last Male Rhino” exhibition held to celebrate the 66th official birthday of Yang di-Pertua Negeri Sabah Tun Juhar Mahiruddin.