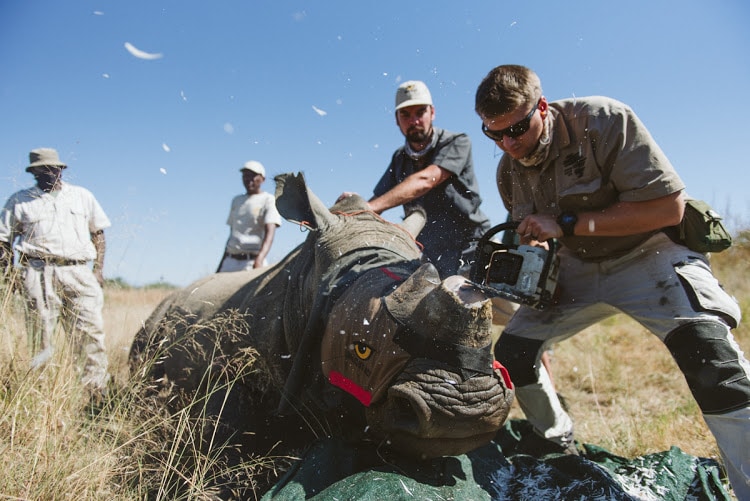 White rhinos in Spioenkop Nature Reserve in KwaZulu-Natal were recently dehorned in the fight to save the species from poachers. Image: As originally published by Sunday Times Daily.

A bold step, but is it in the right direction?

This is what government, through its department of forestry, fisheries and environment, will have to prove after the long-awaited report on the management, breeding, hunting, trade and handling of elephant, lion, leopard and rhino was released on Sunday.

Most significant was its finding that captive lion breeding did not contribute to conservation and damaged SA’s reputation abroad, and “majority of stakeholders supported ending domestication of the country’s lions by outlawing breeding and commercial use of the big cats”.

So this raises the first concern. The panel conducting the two-year-long “investigations and deliberations on SA’s wildlife industry” seemingly did not engage with the wildlife owners, as minister Barbara Creecy said she had instructed the department to ensure the “necessary consultation” was conducted.

Or if there was consultation, how far did it extend? The latest figures show between 8,000 and 12,000 lions along with thousands of tigers, cheetahs and other big cats are spread across more than an estimated 350 facilities in the country.

Government’s objective is clear: it says the captive lion industry poses risks to the sustainability of wild lion conservation, with a negative impact on the authentic wild hunting industry. There was also the risk that trade in lion parts posed to stimulating poaching and illegal trade, said Creecy.

And, she reassured, the recommendations were not directed at the hunting industry.

Meanwhile, a number of lion farmers are researching whether captive-bred lions can be reintroduced to the wild – another issue to be dealt with, and not addressed in the report. Already opponents say this is unlikely to work, as the captive-bred lions have lost their natural fear of humans and would pose a threat to people they encountered.

But while the jubilant fires flare high in the lion activist camps, owners and breeders of rhino hold a different view.

The panel, made up of diverse experts, conservationists, scientists, departmental officials, community leaders and economists, also examined the country’s rhino-breeding industry, as well as the country’s position on the trade in ivory and rhino horn.

Thanks to private ownership and intensive farming, SA has the world’s largest rhino population, with about 22,000 white rhino spread across private farms, game reserves and national parks.

As a result of hunting, poaching and dehorning programmes, SA has a large stockpile of rhino horn that owners would like to sell to buyers in Asia, where it is used in traditional medicine. However, trade in rhino horn is outlawed under the terms of the convention on international trade in engendered species (Cites), to which SA is a signatory.

Those private owners have now taken a swipe at the report, which recommended SA should move away from having privately owned captive rhino populations and focus instead on managing them more efficiently in the game reserves.

Creecy said they intended “to find win-win solutions to safeguard rhino conservation and broaden and deepen the bio-economy associated with rhino”.

She stomped on any hope that the country would continue to lobby Cites to lift the trade ban, saying SA should adopt the recommended positions on ivory and rhino horn.

One of the biggest issues private owners raised was that the report did not include figures showing the Kruger National Park had lost some 67% of its white rhino in the last decade, mostly to poachers.

“The minister and her department have failed to protect our national asset, and now they’re trying to legislate rhino into extinction,” one owner said.

Although we applaud efforts to clamp down on canned hunting and irresponsible breeding, the two years spent on investigating still left some holes. The word of caution then: do not act hastily on recommendations without being confident that all the complexities and impacts have been considered. For example, we need alternatives to curb possible job losses in the related industries.

After all, till Covid-19 crippled tourism, an estimated 8,000 international hunters and, to a lesser degree, connected tourists visited SA annually, spending R2bn on hunting 50,000 trophies in 2019 (local biltong hunters spend R12bn), according to the latest figures.

So if it needs another year or month or two, take the time now so there are no regrets about the decisions later.