By NewsroomSeptember 30, 2019Uncategorized
No Comments

The arrest of three suspects with ivory tusks and a rhino horn in Kericho County has lifted the lid on a cartel that steals game trophies kept as exhibits in various cases pending in courts.

Mathew Kipkemoi Maritim, Emannuel Ngetich and Edi Abdi Kontoma were arrested at Litein trading centre in Bureti Sub County on Sunday with the game trophies with a street value of Sh1.6 million.

When Kenya Wildlife Service (KWS) officers posing as game trophy dealers lured Mr Ngetich to a trap at Kaplong trading centre, they did not know that he would lead them into uncovering a scheme by a cartel that accesses, steals and re-sells the exhibits. 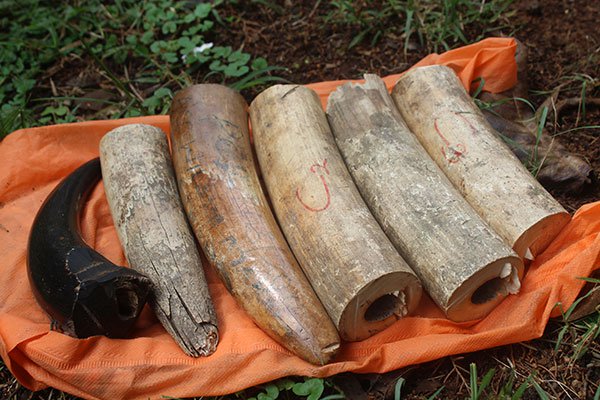 Original photo as published by Daily Nation: A rhino horn and elephant tusks clearly marked as court exhibits which were recovered from three suspects in Litein, Kericho County on September 22, 2019. A syndicate has been stealing and selling game trophies which are stored as exhibits. PHOTOS | VITALIS KIMUTAI | NATION MEDIA GROUP

Mr Ngetich had with him one elephant tusk.

He had brought it to show that indeed he had legitimate stuff and, should the buyers require more, and as long as the price was right, he would lead them to where it had been kept.

On further prodding, and seeing wads of cash, Mr Ngetich led the “buyers” to Litein trading centre where the trophies were kept by the other two accomplices who were promptly arrested and bundled into a government vehicle – with four other tusks and a rhino horn being recovered from them.

It was after the arrest of the suspects that it dawned on the officers that the game trophies were clearly marked as exhibits used in court.

“This is a major breakthrough in not only the fight against poaching and illegal trade on game trophies, but it has also opened a major lead to unravelling a syndicate that operates within the Judiciary where exhibits are stolen and sold,” said an investigating officer who cannot be named owing to the rank he holds.

The KWS investigators said they would be re-looking at all files on game trophies and seek to determine whether or not the exhibits are available or have been smuggled into the black market in a clear attempt to defeat the law.

Another officer involved in the investigations said, “Following the discovery, we will work with the Judiciary and the police to unravel the operations of the syndicate and we will also do an audit of all the cases that have been concluded or are pending [in] the courts.”

When the three suspects were arraigned before Sotik Principal Magistrate Benard Omwanza on Monday, State Prosecutor Sharon Koina opposed to the suspects being granted bond. “The State is opposed to the suspects being released on bail as the matter is still under investigations, and besides the fact that they are a flight risk, we fear that they will interfere with investigations into the matter,” stated Ms Koina.

She said investigations had been launched to establish the courts which the exhibits were stolen from by the suspects or their accomplices.

It also came to fore that all the three suspects did not have national identity cards with them at the time of the arrest.

One of the suspects is said to have contacted an undercover KWS officer in May this year with information that he was selling game trophies in his possession and that he had not gotten a buyer.

It was between May and August that a businessman of Somali origin operating in Litein was brought into the picture as he had other trophies he was selling but had not gotten a buyer yet. It was then that one of them got in touch with the undercover officers, not knowing their true identity, and gave a good bargain for the trophies, which triggered a series of events that led to their arrest.

“There is need to re-look at how the safekeeping of the exhibits as once they have been produced and marked in court, they are stored until the case is heard and determined,” said a Judiciary officer.

Mr Cosmas Koech, a Bomet-based lawyer, said the suspects collude with police officers in whose custody the exhibits are kept once they have been produced in court.

“The case is the tip of the iceberg which the Director of Public Prosecutions and the Director of Criminal Investigations should seriously look into. The officers could be charged with aiding the illegal trade on game trophies,” said Mr Koech.

A number of countries have banned trade in elephant tusks and rhino horns.