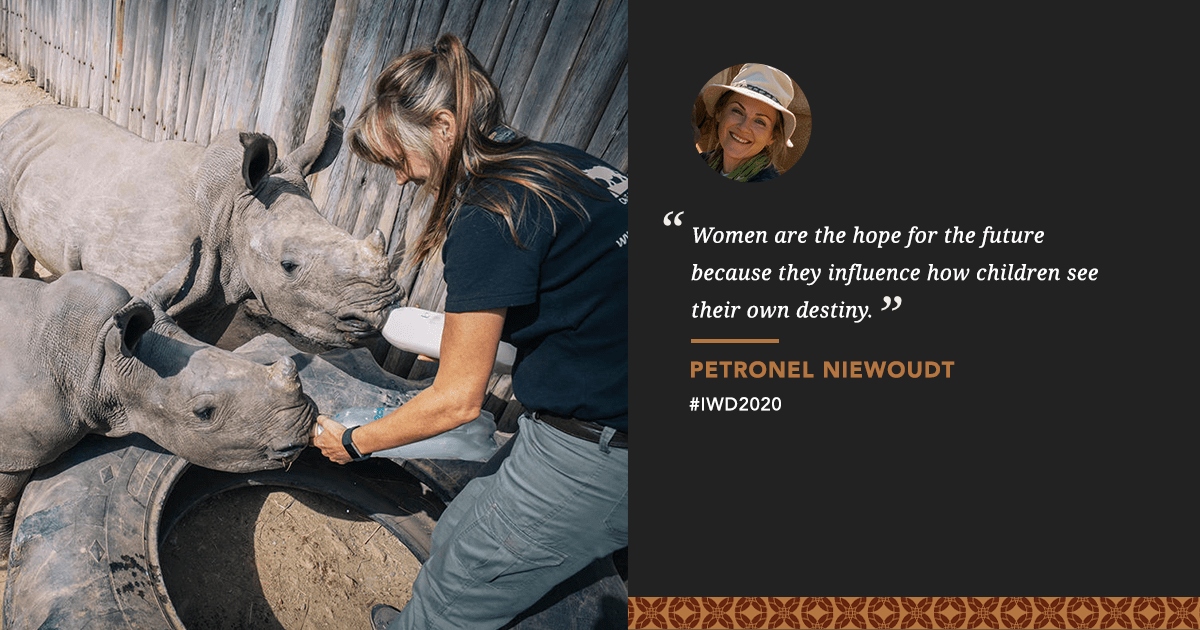 “The more I work in conservation, the more I realize the strength and kindness of women and the enormous part they play in conserving mother earth,” Petronel Nieuwoudt states with confidence and conviction.

Passion, determination, caring, and conviction are qualities ingrained in this energetic conservationist, the founder and driving force behind Care for The Wild—Rhino Sanctuary (CFWRS). The sanctuary, near Barberton in South Africa’s Mpumalanga Lowveld, is totally devoted to the care and rehabilitation of African wild animals—and is also only one of a few specializing in the hand-rearing and care of orphaned and injured baby rhinos.

Aside from her immediate challenge of rescuing, rehabilitating and releasing orphaned rhinos, her vision is to secure a viable free-ranging African White and Black Rhinoceros population at the sanctuary as the nucleus population for future generations of rhino.

“I am often asked how I became involved in this work,” she says, “but you don’t get involved, you’re born with it. I reckon God appointed me to look after the animals, so you had better not get in my way.” There is a steely edge behind her ready smile.

Petronel started her career in the Endangered Species Protection Unit (a specialized unit of the Police), where she held the rank of captain. In 1999 she left the police service and started The Game Capture School. With more than 20 years of experience in the care and conservation of wild animals, she more recently consolidated her efforts in developing the sanctuary of today.

Time is of the essence to save orphaned rhinos. A dedicated helicopter is available to track, find, and secure injured and/or orphaned rhinos. The air rescue team is supported by a highly qualified veterinary team and ground support vehicles that transport the rhino to the CFWRS holding facilities. Most of the orphaned rhinos come from the Kruger National Park, where their mothers were poached.

The early and fragile stages of their rehabilitation and care are hugely important. “When a baby rhino comes in, it has been badly traumatized,” Petronel explains. “You must remember that it has just seen its mom being killed. There’ve been guns, noise, people, blood … .” So, there is an understandable fear of humans, and this has to be overcome. Trust has to be built before any orphan can be reintegrated with other rhinos.

Working with baby rhinos has its challenges, but so does the care and handling of fully-grown rhinos. And to this end, Care for Wild Rhino has developed a state-of-the-art rehab facility that gives injured and sick adult rhinos the best chance at survival and recovery.

Petronel also has a passion for helping and uplifting the surrounding communities in the area. Her heart is not only with animals but the people of Africa as well. Care for Wild Rhino Sanctuary has created more than 300 jobs for previously disadvantaged people.

“Our work has to be inclusive of the surrounding communities; otherwise we will not be able to save the rhino from extinction,” Petronel remarks while walking through the newly developed vegetable gardens. She knows that if she can teach the mothers to grow veggies, she can give them hope and make sure their children will not go hungry.

Petronel also believes that the role of women in conservation is critical for future generations. “We, as women, look after and teach our children. They see the world through our eyes until they are big enough to see it through their own. Women are the hope for the future because they influence how children see their own destiny.”