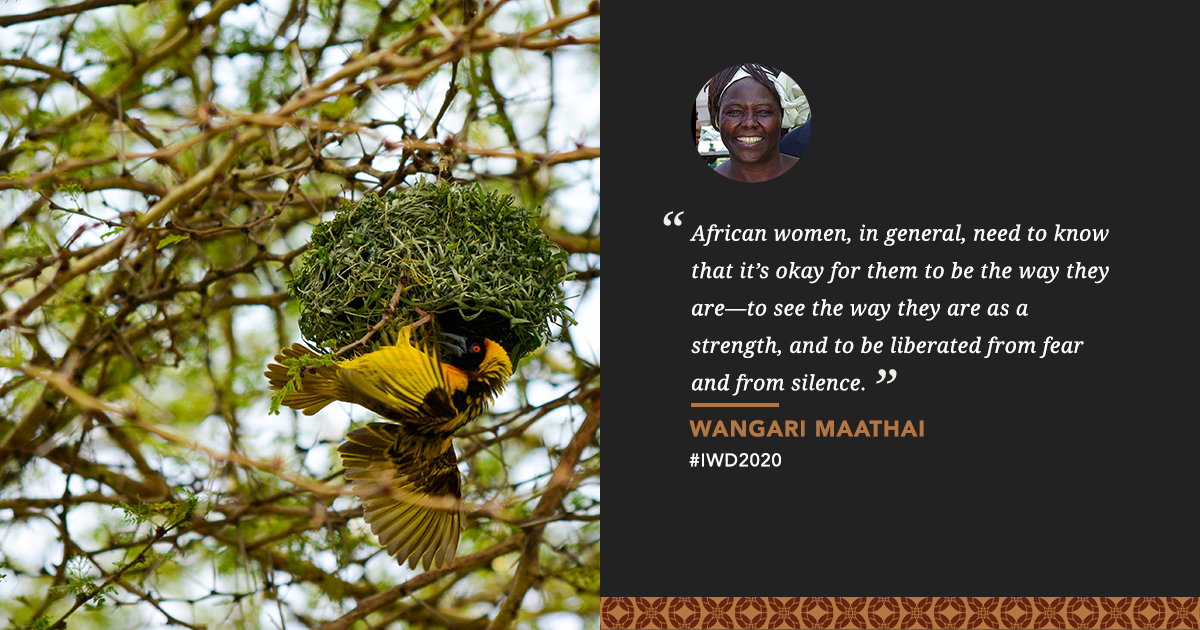 “Until you dig a hole, you plant a tree, you water it and make it survive, you haven’t done a thing. You are just talking.”

If ever there was a “Mother of African Conservation” in modern times, it would have to be the late Wangari Maathai, founder of the Green Belt Movement, the 2004 Nobel Peace Prize Laureate, and the author of four books. Born in rural Kenya in 1940, this redoubtable woman had a distinguished academic career culminating in a Ph.D. from the University of Nairobi, where she also taught veterinary anatomy.

The first woman in East and Central Africa to earn a doctorate degree, Professor Maathai became chair of the Department of Veterinary Anatomy and an associate professor in 1976 and 1977, respectively. In both cases, she was the first woman to attain those positions in the region. She was also honored with honorary doctorates from several universities around the world, including Yale.

Wangari Maathai was internationally recognized for her persistent struggle for democracy, human rights, and environmental conservation. She addressed the UN on several occasions and spoke on behalf of women at special sessions of the General Assembly. She was also listed on UNEP’s Global 500 Hall of Fame and named one of the 100 heroines of the world. In June 1997, she was elected by Earth Times as one of 100 persons in the world who have made a difference in the environmental arena. Professor Maathai was also received honorary doctoral degrees from several institutions around the world: William’s College, MA, USA (1990), Hobart & William Smith Colleges (1994), University of Norway (1997) and Yale University (2004).

In 1976, during her service with the National Council of Women, she introduced the idea of planting trees with the people and developed it into a broad-based, grassroots organization. The Green Belt Movement’s primary focus remains the planting of trees with women groups to conserve the environment and improve their quality of life. During her life, Wangari Maathai assisted women in planting more than 20 million trees on their farms and on schools and church compounds.

Wangari Maathai’s dramatic story is eloquently told in the film Taking Root. It celebrates her simple act of planting trees that grew into a nationwide movement to safeguard the environment, protect human rights, and defend democracy.

This charismatic woman remains an iconic inspiration for all, but especially African women. Her encouragement continues to reach out. “African women, in general, need to know that it’s okay for them to be the way they are—to see the way they are as a strength, and to be liberated from fear and from silence.”