Celebrating game rangers, and the need for real teeth in fighting wildlife crime.

By Peter BorchertJuly 28, 2021Editorial
No Comments 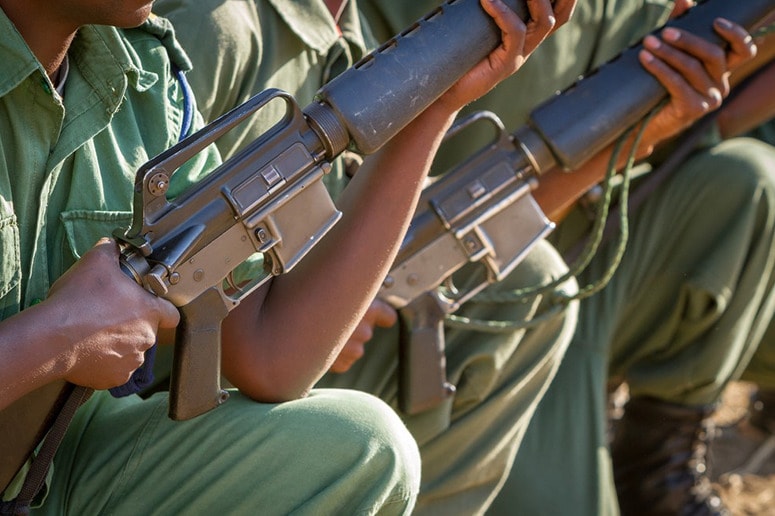 This coming Saturday, July 31, is World Ranger Day celebrated worldwide to commemorate Rangers killed or injured in the line of duty and express appreciation for the work these stalwarts of conservation do to protect the planet’s natural treasures and cultural heritage.

Wildlife poaching has been referred to as Africa’s longest-running war. A startling claim when you consider that bloody and protracted armed conflict has been no stranger to many parts of the continent over the past 60 years or so. Yet, the all too frequent, fierce skirmishes between poaching gangs and those whose job it is to thwart the wanton decimation of thousands of wild animals have much in common with guerilla warfare. And they are often even more akin to civil upheavals where communities and even families are divided and pitted against each other. The Richard Branson-sponsored short film Sides of a Horn vividly reveals how such tragedies can unfold.

The early 1980s saw the dawn of a new era in poaching when demand for rhino horn grew exponentially. And coincidentally, at this time, Africa was also awash with sophisticated automatic rifles gleaned from its many wars and uprisings. These were easy pickings for the key players in smuggling syndicates set on the systematic plunder of Africa’s wildlife. Suddenly the marauding bandits in Africa’s significant conservation areas were well-armed, not only able to kill even the largest of animals with relative ease, but also well able and willing to take on the rangers trying to defend the wildlife.

In the Middle East, newfound wealth from oil drove a great wave of enthusiasm for rhino horn. It was coveted for making the handles of the distinctly curved jambiya daggers worn as symbols of male honor in Yemen. Soon, the long-standing background market for horn used in traditional Chinese medicine faded into insignificance, such was the clamor of demand for the rhino horn dagger hilts. Thousands upon thousands of rhinos fell as a result. Particularly hard hit were the Black Rhinos of East Africa, but soon populations far to the south in Zimbabwe were also being slaughtered. By the mid-1990s, when the use of horn for dagger handles had finally been curbed, fewer than 2,500 Black Rhinos remained in all of Africa.

A decade-long respite followed before the weapons of the poachers focused once more on rhinos, only this time the slaughter was driven by claims in Southeast Asia of the horn’s curative value as a cancer treatment and simply as an ostentatious display of wealth and status. Again, rhinos fell in their thousands and the epicenter of the mayhem on this occasion was South Africa and its relatively abundant White Rhinos.

Elephants were also in trouble, of course. In the early 1800s, as many as 26 million of these great, gray creatures roamed the plains and forests of Africa. But such was the thirst for ivory and trophies that by 1970 only about 1.4 million remained. Even then, there was no real reprieve, and today African elephants number fewer than 400,000 and falling, and both the savanna and the forest elephants are listed as Endangered. In 2012, as rhino poaching surged, so elephant deaths for the year peaked at more than 25,000.

The only thing standing between these wildlife icons and their otherwise inevitable slaughter has been a thin green line, a woefully small—in number, training, resources, and reward—“army” of exceptional men and women who, on too many occasions, pay with their lives. In a few years, people who embarked on careers in managing wildlife landscapes and caring for the animals they harbor have had to become soldiers on the front line in an unequal war.

Wildlife rangers everywhere deserve our gratitude, respect, and support, but especially those in conservation’s war zones where it isn’t only the rhinos and elephants at risk, but thousands of other species as well. Birds, reptiles, insects, fish, and many, many trees and other plants join these iconic wildlife ambassadors—including the pangolin, the most trafficked mammals in the world—as part of our planetary biodiversity that is facing deprivations like never before. The illegal wildlife trade is a crime industry worth billions of dollars every year to traffickers, and it follows in size and impacts closely on the heels of drugs, human trafficking, and the illegal arms industry.

The decline in wildlife populations worldwide is terrifyingly dramatic and swift, and we humans are the cause. Habitat destruction and the international illegal wildlife trade are two key drivers of this. Wildlife trafficking is typically a high reward/low-risk activity and attracts well-organized criminal networks all too ready to exploit the conditions at the coalface of poaching—poverty, corruption and incompetence, poor law enforcement, and the fragility of local politics.

Although some individuals within poor communities undoubtedly benefit from poaching, the overall effect is to make bad situations even worse. Taking vast numbers of animals and plants from the wild robs local communities of their natural capital and livelihoods. Estimates of losses from such crimes run to some US$70 billion a year, not only exacerbating poverty and inequality but also fueling instability and conflict. Moreover, wildlife plundering denudes landscapes of the very things that draw tourists and diminishes the prospects of any post-Covid-19 recovery of an industry with few equals in its ability to provide jobs and earn foreign exchange.

Wildlife crime must be curbed, but this isn’t going to happen on conservation’s battlegrounds, the national parks, and reserves. The importance of the front-line defense provided by rangers cannot be overestimated. And these courageous men and women must be provided with the tools and support to do their jobs. But the place where the war will finally be won or lost will be the realm of lawmaking, law enforcement, and successful prosecution. Also, it will not be the apprehension and punishment of the trafficking foot soldiers, the lowly poaching gangs running the gauntlet of dangerous animals and rangers that does the trick. They are the comparatively low-lying fruit. Instead, it has to be those higher up the food chain who are brought to book—those running the poaching gangs and assembling consignments to slip through porous borders and under the blind eyes of corruptible customs officials. When such miscreants are sent down, the entire smuggling chain faces a severe setback. Disruption of supply is the real enemy of trafficking syndicates.

In South Africa, we’ve had two recent events that are almost certain to have caused serious disruption in the illegal wildlife underworld. In June, Petros Sydney Mabuza was assassinated. Mabuza, also widely known as “Mr. Big,” was an alleged local kingpin in the lucrative illegal rhino horn trade. His association with rhino horn smuggling dates back to 2005, but it took until 2018 before enough evidence was assembled to secure his arrest. At the time of his death, Mabuza, thought to be responsible for as much as 70 percent of all poaching in Kruger, was out on bail and awaiting trial. So far, the motives for Mabuza’s assassination remain unclear, and no suspects have been arrested. What is certain, however, is that whatever the facts of the matter, the death of such an important underworld figure is bound to have been disruptive for his colleagues and contraband clients here in South Africa and much further afield.

The second disruptive event was the arrest of Dawie Groenewald, an alleged rhino kingpin, and AB Steyn, a well-known professional hunter. The two were apprehended while transporting 19 rhino horns and charged with the illegal possession and selling of the horns. The case of Groenewald and others goes back to his original arrest in 2010 after a 15-month investigation and continues to drag on after multiple postponements. Hopefully, this time the court proceedings will be swift and decisive, and if he and his co-accused are proven guilty that the sentence will be appropriate.

But are we really making any headway in fighting wildlife crime? Well, the UN has just passed a resolution urging member states “to reinforce their efforts and adopt effective measures to prevent and counter the serious problem of crimes that have an impact on the environment, conservation and biodiversity, such as illicit trafficking in wildlife and wildlife products.” Furthermore, it urges them to strengthen their legislation and regulations, and “to cooperate at the bilateral, regional and international levels to prevent, combat and eradicate international illicit trafficking in wildlife and wildlife products.” The words all sound good, but where are the real teeth that will hold member states properly accountable and impose meaningful consequences of noncompliance? They just aren’t there.

Recently John Scanlon, the former Secretary-General of CITES, reflected on the case for criminalizing wildlife trafficking under international law. At the moment, there is no such agreement. The CITES treaty was drawn up half a century ago and only considers the biological risks to a species’ survival and does not consider the risks to human or animal health. “We need to adopt a One Health approach to regulating wildlife trade that considers the biological impacts on human and animal health,” says Scanlon, who maintains that a new international agreement is needed to criminalize wildlife trafficking. “It would apply to any species of wild fauna and flora, including fish and timber species, that is protected under any international or importantly, any national law.” Such an agreement would perform needed functions including “setting out the conduct that should be criminalized, committing states to make it a criminal offense to import any wildlife it is being acquired in contravention of the national laws at the source country, and on the exchange of critically important information.

“Such an international agreement on wildlife trafficking has been publicly endorsed by the presidents of Costa Rica and Gabon and, if adopted, would be the first time that a crime significantly impacting the environment is embedded into the international criminal law framework,” says Scanlon. “If we get it right, the local communities living amongst wildlife and the governments of source countries, as well as our global biodiversity, climate health, and security, will all be beneficiaries.”

We really need a new treaty that can enforce compliance, but it should have already been in effect, such is the urgency around halting the massive and criminal overexploitation of natural resources. In the meantime, give thought and much-needed support to our ranger heroes, without them we would be truly lost.