Challenge of bringing straying rhinos back into the wild in Assam

By NewsroomJanuary 4, 2022Conservation
No Comments 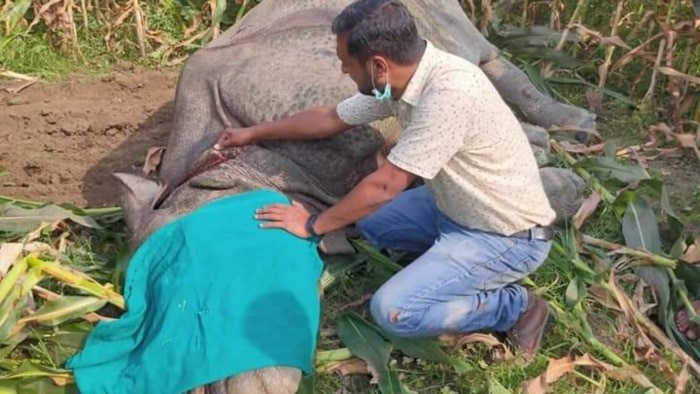 Assam is grappling with not just the worsening human-elephant conflicts, with rhinoceroses frequently straying out of their habitats into human settlements around reserved forests in the state, which has nearly 3,000 one-horned rhinos.

Such incidents attract a large crowd, many even getting injured while attempting to take a selfie with the giant animal.

On measures to tame a straying rhinoceros and bring it back to the wild, Jahan Ahmed, a wildlife veterinarian associated with several such operations, said, “It involves a lot of challenges. From crowd control to logistics, transportation and managing trained manpower to handle the coordination among local administration, forest department and police.”

A paper detailing how two rhinoceroses, which strayed out of Orang National Park, were tranquilised on April 2 this year and the challenges it involved was published in the Indian Journal of Animal Health (December issue). The paper said that chemically restraining the animals is a suitable option to capture the strayed animals and translocate to their natural habitat without causing any harm. The rhinoceroses that strayed out of the OrangPark (that has over 100 rhinos) a week ago was found near a maize field close to NH-52 at Godaijar village in Darrang district.

“Hundreds had gathered there and one onlooker was injured by the rhinos while taking a selfie. The rhino was still inside the field and its location could be ascertained by looking at the movement of the maize field. We decided to tranquilise it from the top of an excavator. The first dirt was fired but it broke and fell off. The rhino got up, charged and hit the excavator with full force. There was a violent jerk and we lost our balance. The rhino then moved about five feet back and looked at us angrily,” the paper stated.

The second dart was attempted after about 25 minutes and it hits the target, causing the animal to become motionless after a few minutes. “We checked with the elephants and other means to be sure that the chemicals worked. We covered its face with a green cloth with the help of the bamboo and asked the excavator to lower the loader for loading the rhino. The rhino was placed inside a cage and a hydraulic vehicle was used to put the cage with the rhino inside a truck. The revival drug was injected intra-muscularly and the rhino was up after three minutes,” it said.

Ahmed said straying rhinos were becoming frequent in the fringe areas of Kaziranga National Park, Orang and Pobitora Wildlife Sanctuary, mainly due to biotic pressure on protected habitats resulting in degradation of the habitat, intra-species conflict and flood.