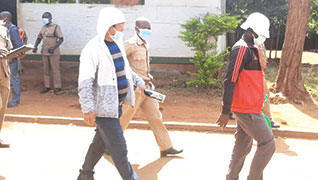 The conviction was passed at the court by High Court judge, Violet Chipao, who was handling the case before she was promoted to the High Court.

Yun Hua has been found guilty of two counts bordering on dealing with 103 pieces of rhino horn and money laundering.

He initially had already pleaded guilty of the offence of illegal possession of 103 pieces of rhino horns.

Chipao also acquitted co-accused Jimmy Mkwezalamba from all charges of conspiracy as he was wrongly charged and other offences relating to the matter.

Defence lawyer, Chrispine Ndalama, said the two parties would go for pre-hearing of the sentence to furnish the court with evidence that would facilitate proper sentence.

“According to the law, the court can allow parties to bring in evidence that may help it in coming up with the right sentence so the State wants to bring evidence and we will also consider giving our own evidence. Our role will only be making sure that proper evidence is [brought] before court,” he said.

State Prosecutor from Director of Public Prosecution’s (DPP) office, Pirirani Masanjala, said they were satisfied with the outcome of the case.

“The court decides on the law and the evidence so as the office, in accordance with the law and evidence, we are satisfied with how the court has made its decision. With the pre-hearing of the sentence, what we are trying to do is to show the court the gravity of the case,” he said.

The two convicts were arrested in August 2019.

Mkwezalamba and the Chinese national were previously convicted and sentenced to three years and 11 years imprisonment for possessing live pangolins and possessing rhino horns and illegal firearms respectively.

Reports show that so far, 13 syndicate members, including nine Chinese nationals and Malawians, have received prison sentences on various offences related to extinct species of wildlife.