By NewsroomJanuary 31, 2022Wildlife Crime
No Comments 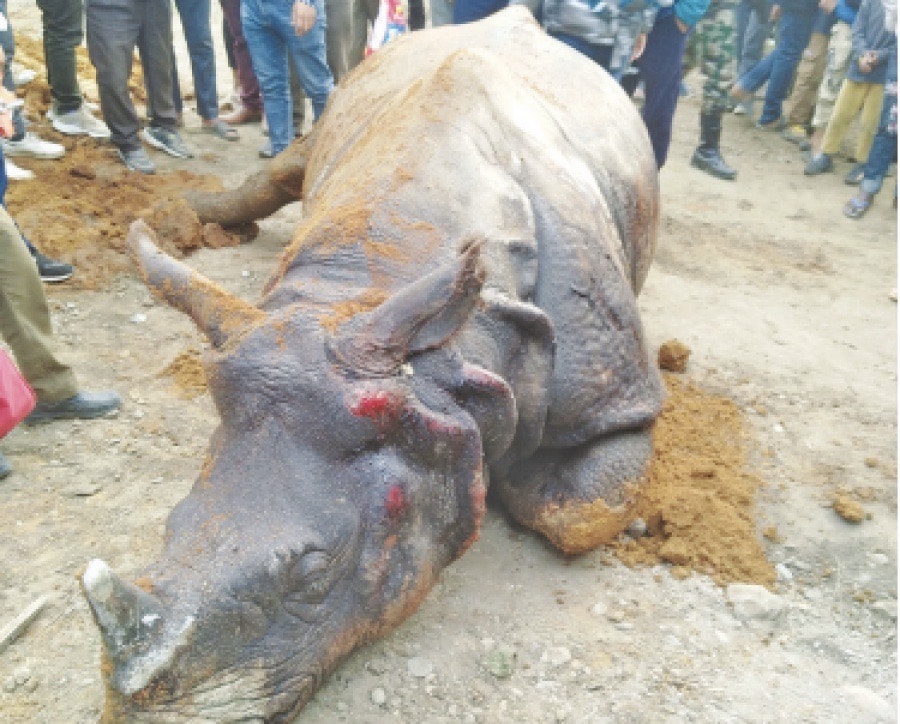 Anyone found guilty of killing or poaching a rhino can face a jail term of up to 15 years and a fine of up to Rs1 million. Image: As originally published by the Kathmandu Post

The Chitwan National Park has issued an arrest warrant against the representative of a construction company involved in digging a ditch along the Bharatpur-Gondrang road section after a rhino was found dead in the ditch Sunday.

Ganesh Prasad Tiwari, information officer at the park, said the park has issued an arrest warrant against Sahadev Khadka, the owner of Indo Sagun JV. “The national park’s deputy conservation officer Raju Ghimire has been investigating the death and the arrest warrant is part of the investigation,” said Tiwari.

After the incident, the Department of Roads, Bharatpur had blamed the contractor for the rhino’s death.

Anyone found guilty of killing or poaching a rhino can face a jail term of up to 15 years and a fine of up to Rs 1 million.

After the media reported the death of the 11-year-old rhino on Sunday, ordinary people and conservationists had expressed concerns and outrage on social media and demanded punishment for the culprits involved in the incident.

Officials at the national park had told the Post on the phone that the tragedy happened after two rhinos had a fight and the loser, which was being pursued, broke the fence of the park as it ran, hit the retaining wall of the road and fell into the ditch.

“If there was no ditch, the rhino could have survived. It’s a serious issue, but the culprits have not been arrested till now,” said Tiwari.

He further said the investigation committee has already conducted a field study and will be submitting a final report to the Ministry of Forest and Environment.

After Sunday’s incident the ministry has also formed a five-member investigation team with a joint secretary as convenor.

“It’s good to see everyone expressing serious concerns about the grave crime. The perpetrators must be punished,” said Rampreet Yadav, a former chief conservation officer of Chitwan National Park.

The Road Division Office has been widening the six-kilometre road section from Pulchwok to Gondrang to six lanes for the past one year.

“Road expansion drive including digging the drainage itself in the protected area is unlawful act, this should never happen again,” added Yadav

74, a conservationist and one of the founding members of the Chitwan National Park, which was established in 1973.

In his earlier conversation with the Post, Yadav had said he and other conservationists have on several occasions asked the Department of Roads to construct underpasses or flyovers for animals in the buffer zone.

The one-horned rhino, which is native to Nepal and India, is an endangered animal. Nepal is home to a total of 752 one-horned rhinos and Chitwan National Park alone has 694, according to the national rhino census conducted last year.

According to the park, as many as 21 rhinos have died in Chitwan in the past six months.

In 2019, a female rhino, aged 25, had died after falling into a septic tank at Tiger Land Hotel in Jagatpur of Bharatpur-23.