By NewsroomAugust 17, 2021Wildlife Crime
No Comments 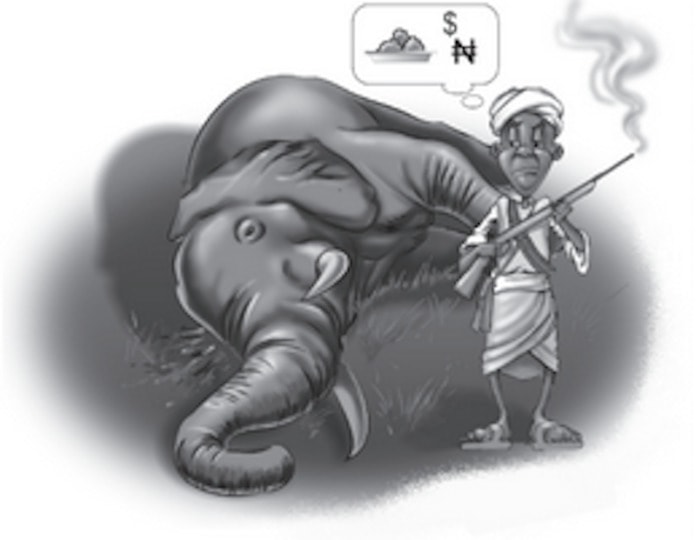 Cartoon as originally published by This Day

The authorities could do more to contain the crime

The Nigeria Customs Service (NSC) recently announced the seizure of huge wildlife products including elephant tusks and other endangered species. And in Lagos, among some wealthy people, no party is complete without a display and barbecue of some protected animals, as seen in some trending videos on social media. It should worry the authorities that our country is fast becoming a huge jungle. In fact, Nigeria has officially assumed the hub for illicit trade in wildlife, and the recent fad of serving endangered animals as delicacies at parties has enraged the nation’s environment communities.

The Nigerian Conservation Foundation (NCF) has identified pythons and crocodiles as being endangered species as they are also widely eaten. In March this year, the United Nations Office on Drugs and Crime (UNODC) stated that there is pressure on Nigerian wildlife, with pangolins, forest elephants and other endangered species, traded both domestically and internationally. According to the UN agency, animals are hunted for their bushmeat/barbeque at choice parties and body parts, such as is done with pangolin scales and elephant ivory tusks.

There appears to be geographic consolidation of trafficking routes across several markets, with Nigeria emerging as a key source/transit country for many shipments of protected species and products. The Convention on International Trade in Endangered Species of Wild Fauna and Flora (CITES), Elephant Trade Information System to COP17 places Nigeria the second most prominent ivory exporting country in West Africa, functioning as a major hub for ivory from Central Africa and, increasingly, from East Africa. UNODC’s World Wildlife Crime Report (WWCR) 2020, found that, in 2019 alone, at least 51 tonnes of pangolin scales seized globally originated from Nigerian ports, compared to only two tonnes in 2015. More than half of all seizures of pangolin scales worldwide were traced to Nigeria in 2019. Despite a global decline in trafficking in ivory since 2011, Nigeria has been identified in a growing number of incidents as part of the illegal trade chain.

The January 2021 seizure at the Apapa Ports by the Nigeria Customs Service of 20 feet container containing the remains of various endangered species further buttresses these findings in the WWCR 2020. The container included 2,772 pieces of elephant tusks of different shapes weighing about 4,752kg; 162 sacks of pangolin scales weighing 5,329kg; 5kg of rhino horns, dried and fresh animal bones; 103 kg of skulls suspected to be of lions and other wild cats; and 76 pieces of timber (semi processed and processed).

Obviously concerned about this ugly development, the federal government requested UNODC’s support for interventions to tackle wildlife crime, including the conduct of a corruption risk assessment (CRA) for the wildlife and forestry sectors. Consequently, UNODC in partnership with the relevant national ministries, departments and agencies is undertaking a series of activities to facilitate corruption risk assessments and the development of corresponding corruption risk mitigation strategies for Nigeria’s wildlife and forest sectors. This intervention is being funded by the European Union through the International Consortium on Combating Wildlife Crime (ICCWC).

This commitment has seen the UNODC supporting both the wildlife and forest sectors in Nigeria, and the first phase of the CRA focuses on the wildlife sector, the Nigeria Customs Service and the National Environmental Standards and Regulations Enforcement Agency (NESREA), as the two main agencies with a mandate to counter illegal wildlife trade in Nigeria. These events, no doubt, have been instrumental to the recent successes the NCS has achieved. However, the federal government needs to strengthen the Federal Ministry of Environment, the NESREA, and the Independent Corrupt Practices Commission (ICPC).