By NewsroomAugust 3, 2021Science and technology
No Comments 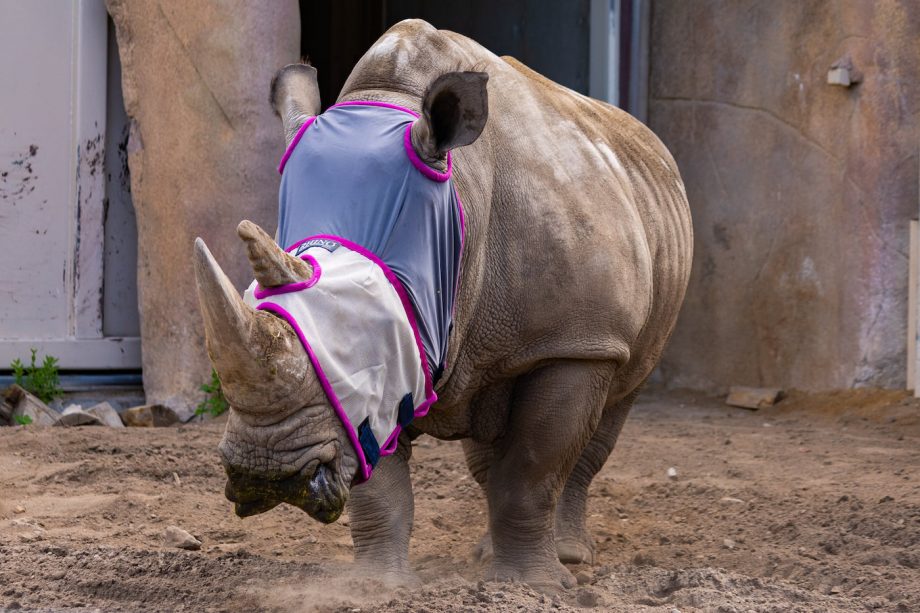 Princess with her fly mask on. Image: As originally published by Horse & Hound

When your rhino is suffering with eye allergies and irritation caused by flies, there’s only one way to go.

Or there was for Utah’s Hogle Zoo in the US, where Princess, who is now 42, was struggling with all sorts of eye issues. Zoo staff and vets tried a range of different eye washes and ointments but no to effect, until Princess’s main caretaker and trainer Lisa Ellison, with zookeeper Melissa Farr and rhino and elephant care manager Lauren LeCoque, who has an equestrian background, came up with the idea of a horse fly mask.

“Believe it or not, a lot of elephant and rhino keepers have a ton of horse experience since both those species are managed very similarly,” Lauren told H&H. “They are hind-gut fermenters, can colic, get foot issues like thrush and so on.

“We do footwork on the elephants just like a farrier does with a horse — rasping and hoof knives.

“So the thought of using a fly mask was pretty instinctual and within our repertoire of knowledge. We contacted a local horse company in Salt Lake City, which eventually got us in touch with Horseware.”

“She worked closely with Hogle Zoo and the Horseware R&D team, using their equine knowledge and research to design something protective and comfortable for Princess,” the spokesman said. “One of the unique obstacles was creating a pattern that was robust while still preventing rubbing against the rhino’s horns.

“Louisa worked directly with former Horseware employee Alyssa O’Neill on the pattern and design to produce the final fly mask and sent it to the zoo for the final test. After some positive reinforcement training with her zookeepers, Princess happily wears the protective fly mask which has drastically helped with her allergies. She’s worn the mask for three seasons, so this year Horseware upgraded her to new masks so she could continue to have a happy and healthy summer life.”

Lauren said after Princess had been gradually accustomed to wearing the masks, four of which were initially donated by Horseware, her severe symptoms to almost nothing, or nothing at all. She only has to wear it from midsummer to autumn, from her breakfast time to sunset.

“We love that the company, unprompted, made the mask with a pink trim; it’s so adorable and very fitting!” she said. “We were unsure how her half-brother George was going to react to the mask but surprisingly he was unfazed by her wearing it.”

Princess, who was born at the San Diego Zoo and moved to Hogle when she was very young with George, is “a little bossy because she normally wants all the food and all the attention”.

“Otherwise, she is extremely food-motivated and easy to train with,” she said. “Now that she is in her geriatric years, she enjoys a cool bath in the mornings and sunbathing during the daytime.”

A zoo spokesman added: “Thank you so much to Horseware for their donation and for helping Princess to be a comfortable, happy girl!”