ISIOLO, KENYA: Over 70 runners from across the world are taking part in the 5-day, 220 kilometre race that will see the runners, covering the distance split into five stages crossing five wildlife conservancies, each of which has its own characteristic terrain from verdant grasslands to forest.

“With a course covering 220 kilometres, this is arguably the longest race in Kenya, traversing what has been described as the playground of East Africa’s iconic wildlife,” said Jimo.

The runners will traverse through Lewa, Borana, Ol Jogi, Loldaiga and Ol Pejeta conservancies. ForRangers are a dedicated group of individuals who are raising money for the welfare of rangers who risk their lives daily to protect Africa’s endangered species. 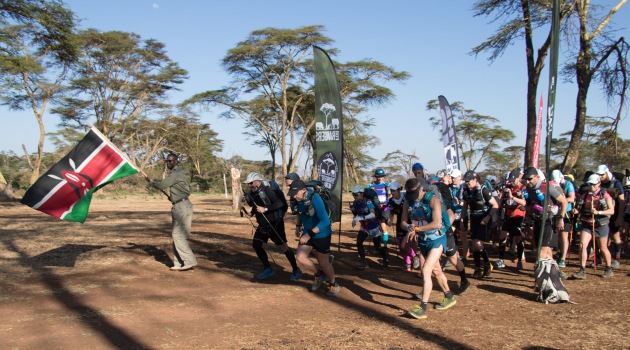 “What also makes this race very different, is that the competitors are carrying their own food, medical supplies, and equipment throughout the race,” a statement from the conservancy said.

The group aims to advance its support for rangers through this event and enhance the conservation commitments and activities in different conservancies and parks across Africa.

The runners will cross the finish line on Sunday, 22 September a date that also marks World Rhino Day at the Ol Pejeta Wildlife Conservancy.

“This unique race is run in support of the brave rangers who stand guard over Africa’s remaining giants and endangered wildlife species. Funds raised through the annual event go directly to rhino conservation and ranger welfare initiatives,” said the conservancy statement, adding that, “More than Sh10 million was raised during the inaugural event which was held in August 2018.”

Lewa has one of the highest wildlife densities in Kenya including 12% of the country’s black and white rhinos, and the world’s single largest population of Grevy’s zebra.

The Conservancy is also home to herds of elephants and buffalo, giraffes, lions, cheetahs, more than 400 species of birds.