By NewsroomSeptember 28, 2020Anti-poaching
No Comments 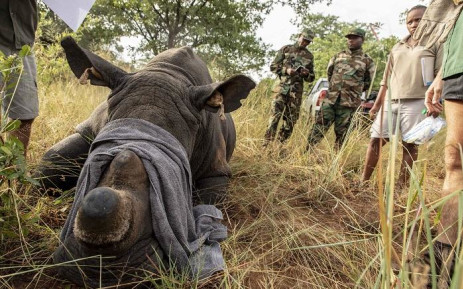 FILE: A sedated rhino has its GPS tags checked to make sure they match its DNA sample. Original image as published by EWN.

JOHANNESBURG: Rhino poaching has seen a dramatic decrease due to the lockdown but there are concerns about a resurgence in poaching with the country now on level one of the lockdown.

The Department of Environment, Forestry and Fisheries said that in the first six months of this year, the numbers of rhinos killed by poachers fell by more than 50% from the previous year to 166.

The department said that with no international or local tourism, the lockdown prevented poachers from moving around and it was able to ramp up protective measures.

However, there are concerns that with the gradual reopening of the country’s borders and a return of international tourists from next month, poaching will increase.

The latest figures show that South Africa has about 20,000 rhino, estimated to be 80% of the world’s total population.

Conservationists are concerned that with the economic downturn caused by the coronavirus and the decline of tourism, many people are desperate, and some may turn to poaching.

But the department said that new measures were being used to prevent this.

This includes a ‘smart fence’ being built around the Hluhluwe-iMfolozi Park in KwaZulu-Natal, which alerts park rangers when an intruder tries to sneak into the area.