By NewsroomNovember 28, 2019Uncategorized
No Comments

North West police have recovered 100 rhino horns, four tiger carcasses, a tiger skin, weapons and hundreds of rounds of ammunition during a raid on two farms in the province.

The raids took place in Klerksdorp and Hartebeesfontein during an intelligence-driven operation by the Organised Crime Unit and illicit mining team on Tuesday, which resulted in the arrest of five suspects. 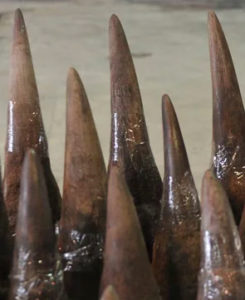 Police spokesperson Brigadier Sabata Mokgwabone said the raids were part of the police’s ongoing endeavour in the province to turn the tide against illicit mining.

“The suspects’ arrests emanated from the operationalisation of intelligence about illegal firearms which were reportedly kept on a farm in the Klerksdorp area. During the operation, a hunting rifle, shotgun, special revolver, pistol as well as a number of empty cartridges and live rounds of ammunition were recovered.

“Moreover, the police confiscated what appeared to be a tiger skin. Further probes led the police to another farm in the Hartebeesfontein area where two suspects were arrested for being in possession of illegal firearms that included a rifle, hunting rifle, pistol, revolver as well as 708 rounds of ammunition,” said Mokgwabone.

The two suspects were found in possession of approximately 100 rhino horns, four tiger carcasses and US dollars valued at R45 900.

The five suspects are expected to appear in the Klerksdorp Magistrate’s Court on Thursday.

North West provincial commissioner Lieutenant General Baile Motswenyane commended the officers for their hard work which resulted in the arrests and confiscations.

Motswenyane said the arrests would send a clear message that the police would leave no stone unturned in ensuring that those who disrespect the rule of law, including possessing illegal firearms, would be dealt with accordingly.