Coronavirus: Fears of spike in poaching as pandemic poverty strikes

Conservation groups say nature must be a cornerstone of economic recovery plans for the sake of people, health and economies. The call comes amid fears of a “spike in poaching” as rural communities lose vital income.

In Cambodia, 1% of the entire population of one critically endangered bird was wiped out in a single event.

Conservationists are noticing increases in hunting of protected species since the spread of coronavirus began to disrupt traditional economic and social systems in rural areas, said the WCS. 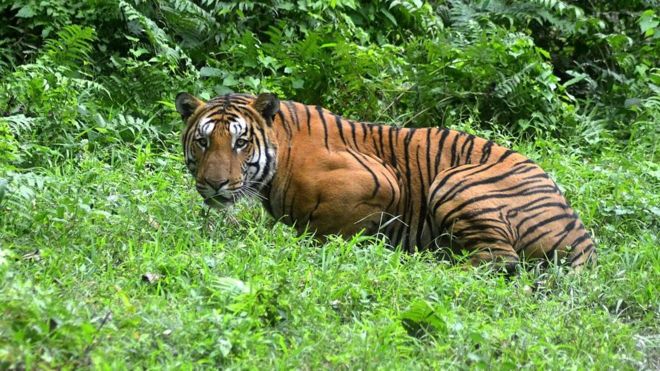 Original image as posted by BBC: Experts warn of a return to tiger poaching

Conservation organisations need to be doing their utmost to support local people, he said. “They’re the last line of defence for these forests, these birds, these wetlands, and they’re the people that need support right now so they have alternatives and they don’t need to turn to natural resource extraction to survive.”

In India, there have been reports of an upsurge in tiger poaching, while there are fears in Africa that the rhinoceros and other endangered species could be at risk.

Matt Brown, director of the Africa region for the Nature Conservancy, spoke of a sudden decline in tourism revenue at some of Africa’s key wildlife reserves and national parks as a result of the pandemic.

“The concern is how do these areas maintain the effectiveness of their wildlife patrolling and security when about 50% of their planned revenue for the year has now dropped to zero,” he said.

And the closing of export businesses and manufacturing plants had put a lot of people out of work, which on top of the tourism drop was “a double whammy”.

“There could be an increased direct poaching pressure on wildlife as a result of the downturn in the global economy,” he said.

Finance ministers from G20 countries are meeting this week to discuss economic recovery plans to address the impacts of the pandemic.

Conservation group Campaign for Nature, which includes experts from Asia, Africa and Latin America, is calling on ministers to include protection of nature in their plans.

Hugo van der Westhuizen, of the Frankfurt Zoological Society, said now more than ever was the time to re-evaluate the value of nature.

“Conservation cannot be built and maintained only on tourism income or donor funding,” he said. “Covid-19 is teaching us that we take nature for granted, together with clean water and air, and it seems we need to lose something before we realise its value. Nature cannot be recreated once it is gone.”