COVID-19 prompts closure of Indonesian parks, and a chance to evaluate

By NewsroomMarch 24, 2020Anti-poaching, Conservation
No Comments

JAKARTA: Indonesian authorities have ordered a temporary closure of dozens of national parks and conservation sites to curb the spread of the novel coronavirus that has killed thousands of people worldwide.

Effective March 19, 56 conservation zones nationwide are closed to visitors indefinitely, according to the Ministry of Environment and Forestry. In a statement, it said more sites, including zoos, could be added to the list depending on the situation. Affected sites include tourist favorites such as Mount Leuser and Way Kambas in Sumatra, Komodo in East Nusa Tenggara, and Mount Rinjani in West Nusa Tenggara.

“Besides being aimed at preventing COVID-19 from spreading further, this closure is an opportunity for these areas to rest and breathe,” Nanang Prihadi, the director for environmental service use at the environment ministry, told Mongabay in a text message. “For the operators, this [time] can be used to clean up, fix and maintain the facilities and the areas.”

Indonesia has reported 369 positive cases of COVID-19, the respiratory disease caused by the coronavirus, and 32 deaths as of March 20. Among other measures the government has taken to curb the spread of the disease is a prohibition on flights from countries hit hard by the pandemic, and a suspension of the visa-on-arrival policy. 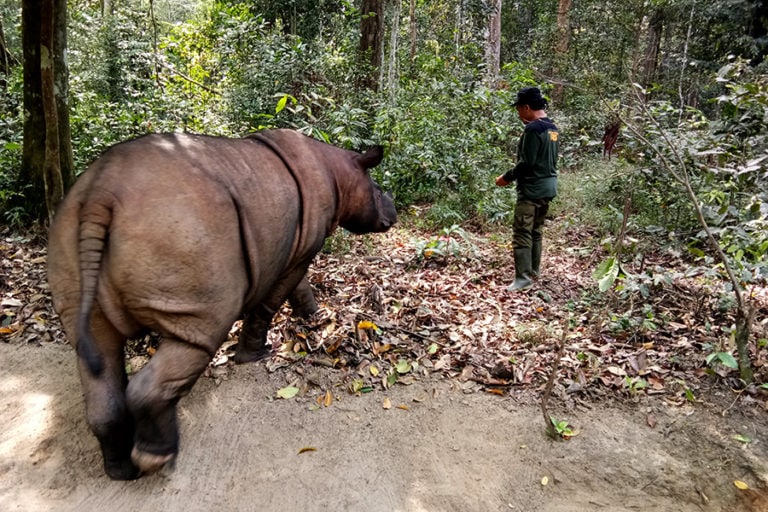 Original image from Mongabay: A Sumatran rhino with a caretaker at the Sumatran Rhino Sanctuary in Way Kambas National Park. Image by Rahmadi Rahmad/Mongabay Indonesia.

Park authorities say they will maintain their protection and monitoring of the conservation sites even in the absence of visitors.

“[This closure] shouldn’t mean that people will be able to steal from the park as they wish,” Subakir, the head of Way Kambas National Park, told Mongabay in a phone interview. “If anyone tries to encroach, we will capture them.”

Subakir said the rangers and staff at Way Kambas would continue working as normal, including attending to the park’s seven captive Sumatran rhinos and 69 Sumatran elephants. “But I’ve told them to keep their distance from each other and eat nutritious food. And if they feel unwell, they must immediately check with the doctor,” he said.

Subakir said the closure would likely impact the park’s revenues. Tourist receipts at Way Kambas topped 1 billion rupiah ($63,000) in 2019, but could fall to half that amount this year, Subakir said. He added that small local businesses around the park offering accommodation and meals to tourists would also be hit. “Everything related to tourism is going to be automatically disrupted,” he said.

Conservationists, meanwhile, have welcomed the closure order, saying it will reduce the risk of infection among rangers and staff. They also say it’s an opportunity for park operators to evaluate the impacts of tourism to the ecosystem in these areas.

“This can be a chance to understand if these zones have implemented actual ecotourism or merely nature-based tourism which is just a form of mass tourism with the focus on nature,” Darmawan Liswanto, a scientific adviser to the Titian Lestari Foundation, which advocates for environmental sustainability, told Mongabay in a phone interview.

Darmawan said mass tourism activities in some conservation zones have led to problems such as waste accumulation. “When the COVID-19 outbreak is over, I hope they won’t return to nature-based mass tourism as usual,” he said.

He also commended the park agencies’ commitment to protecting the areas amid the shutdown by continuing to carry out patrols, saying “I don’t think poachers are taking a break.”