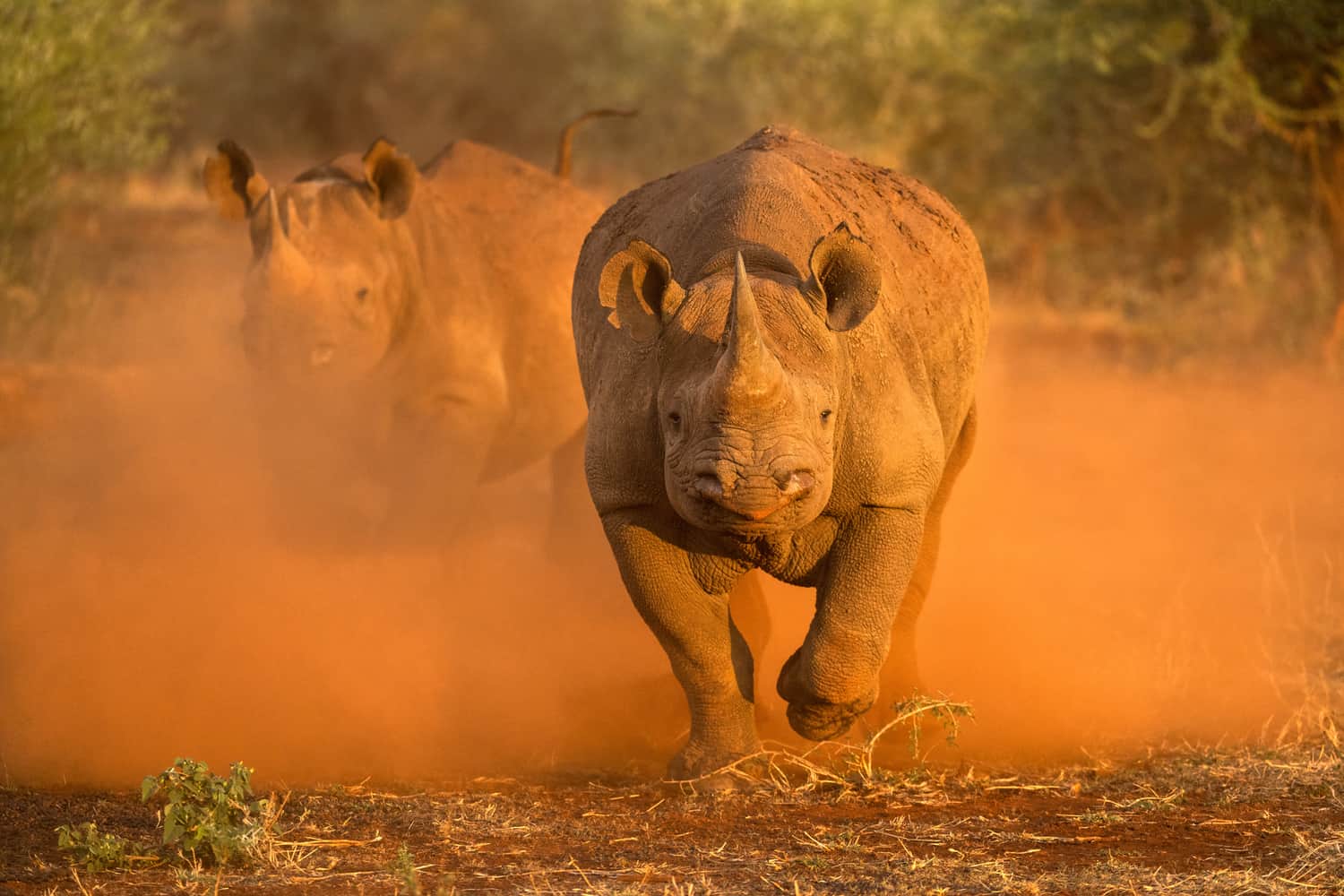 An action photograph of two female black rhinos charging towards the game vehicle, kicking up red dust and sand at sunrise. Image: As originally published by The Citizen

Environment, Forestry and Fisheries Minister Barbara Creecy, has paid tribute to field rangers for the incredible work they do daily to keep national parks and the country’s iconic species safe.

“In the battle to conserve our wildlife and halt poaching, it is our rangers who remain at the forefront, putting their lives on the line daily to conserve our environment and vulnerable species, despite the additional risk of contracting Covid,” Creecy said.

In commemoration of World Ranger Day on Saturday, Creecy also paid tribute to 11 staff members at South African National Parks (SANParks) who lost their lives to Covid over the past year.

“We find ourselves in a position where the efforts being made to combat wildlife crime, such as rhino poaching, are influenced to some extent by the extraordinary circumstances surrounding the battle to beat the Covid pandemic.

“May the souls of all our SANParks staff and field rangers rest in peace after serving our nation with diligence and passion,” Creecy said.

“From January to the end of June 2021, a total of 249 rhino have been poached for their horns in South Africa. While this is higher than the number of rhino killed for their horns in the same period last year at 166, it is less than the 318 rhino that were poached in the first six months of 2019.

“During the six months, January to June 2021, the Kruger National Park experienced 715 poacher activities, an increase of 3.77% in comparison to the number in 2020, which was 689 for the same period.

A number of successful arrests and prosecutions has also been recorded in the past six months, underscoring the success of the collaborative work being done by law enforcement agencies.

From January to June 2021, the minister said 40 alleged poachers were arrested within the Kruger National Park, with a total of 125 people having been arrested for rhino poaching and rhino horn trafficking across the country in the same period.

Creecy said numerous confiscations of rhino horn have also taken place since January, both within the country as well as at OR Tambo airport.

“The cohesive partnership with the Southeast Asian countries is also showing concrete results, with the recent collaboration between South African and Vietnamese authorities resulting in one of the largest seizures of rhino horns and other wildlife products, thereby disrupting syndicate activities.

“A total of 14 cases have been finalised since the start of the year with a verdict, representing a 93% conviction rate. The total of 14 convictions represented 20 convicted accused. Due to the Covid pandemic, the finalisation rate in courts has slowed down as witnesses, accused and court staff in many instances are required to isolate or quarantine
and even court buildings, in some instances, need to be decontaminated. This has had an effect on the finalisation of cases.

“It is clear that the multidisciplinary, integrated approach to investigating illegal wildlife trade is bearing fruit and that effective collaboration with critical role players remains key to our success. I congratulate the teams on a job well done,” Creecy said.

She said the department, working with a number of communities, NGOs and donors, continues with various community developmental programmes, in collaboration with its partners, SANParks, provinces and neighbouring countries.

“Noticeable increased poacher pressure has been experienced in Limpopo, Mpumalanga and the Free State. The department is also monitoring the increased pressure seen on private rhino reserves and is collaborating closely with the private sector,” she said.