By Merlyn NkomoNovember 3, 2021Editorial
No Comments 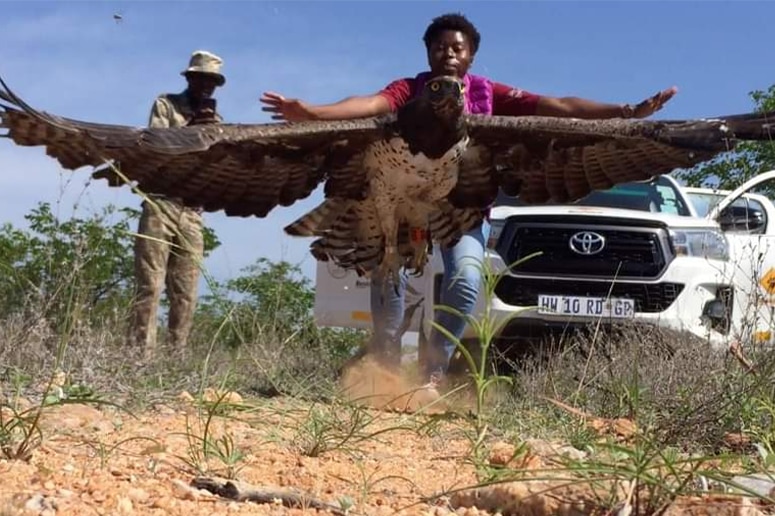 In 2015, I made a conscious decision to devote my career to vulture conservation. For weeks before I made this decision, I had been questioning my choice to pursue conservation. Why had I chosen to chase after birds with all the alienation and career challenges I had faced instead of doing a teaching diploma in which I was sure I would have excelled?

When this happened, I was outside a small enclosure; inside was an African White-backed Vulture, its head drooped, tired after a series of seizures. I had watched it all happen, and now we both stood there in silence, helpless and waiting for time’s decision. This particular bird was suffering from the effects of organophosphate poisoning, probably carbofuran, and many more others passed through those enclosures suffering worse. So for the sake of this majestic life I was looking at in strife, I set out to change perceptions.

Vultures are apex predators, and as a third-year student, I saw them for the first time in my life during my industry internship. They were majestic with massive wingspans, and their feathers were cleaner than I had imagined vultures could ever be. Being next to these birds I had learned so much about was an emotional moment, and they and their conservation quickly became my calling.

In retrospect, the “shame” of being the African in vulture conservation compelled me to assume an educator role. I understood that Africans were ignorant, problematic, and needed enlightenment not just on the vulture crisis but conservation as a whole. I soon found myself on the stage of auditoriums filled with people who, like me, had never seen these birds before; all of them city folk, with me telling them African culture was naive superstition. Nevertheless, a lot happened during these first attempts at educating my people, teaching me valuable lessons, opening my eyes to the misplaced priorities and the deep colonially biased nature of conservation in Africa.

Colonization was a very deliberate campaign. Its intentionality permeates even into the everyday lives of present-day Africans. The aim was to alter, if not erase, the African ways of life, and the same can be said elsewhere in the world with Native Americans, Aboriginal Australians, and the Andaman islander, to name but a few. In just a century, what was nothing but an imperialist agenda by ambitious, greedy entrepreneurs, Africa was turned on its head, its course forever altered. The colonial project was not merely an expedition European men undertook to enrich themselves and raise the flag of their conquering nations. It was motivated by racism and the intention to dominate, subdue, erase, enslave, and exterminate different races and cultures in other places.

Now, decades after colonial governance protocols have fallen, Africa still has a long way to go in decolonizing systems that are not serving the continent. These practices still do not work due to the mere fact that they were designed to exclude and demean Africans, erasing and replacing their cultures and ways of life with a Eurocentric standard. Unfortunately, conservation largely remains one of those sectors in need of decolonization. It takes understanding that to the colonized, the falling of an oppressor is not a complete victory until the system and machinery of oppression have been dismembered.

Like me, many conservationists today are peaceful and progressive people, but it is hard to accept a conservation ethic that is not only still rooted in colonialism but continues presenting and imposing a colonial system of thought and action. As a result, most find it absurd to still be engaging in transformational agendas. No one living today is an oppressor. Surely conservation should not be clouded in racial politics, right? The unfortunate truth is that conservation was the right hand of the colonial project. Large tracts of land were taken away from indigenous governing systems; if not for agriculture or the ore and glitter, then it was to create nature reserves.

The so-called protection of wildlife and nature was the primary tool in the disenfranchisement of tribes of people and the forced displacement of many groups from important ancestral lands central to their ways of life. What we term fortress conservation today was a deliberate effort to alienate and exclude African people from natural resources after they had been hunted out of equilibrium for sport and museum collections abroad. We still present this conservation policy in retrospective lectures with African students in attendance without stating clearly whose imaginary castle this fortress protected and from what imaginary siege. Although it is largely taught that this conservation model was unsuccessful, no second thought is given to the implications and effect of reporting on these atrocities in a sanitary non-partisan way.

Modern conservation on the African continent attributes its origins to white explorers who traversed the continent on horseback with caravans and entourages “making discoveries” of places and animals, hunting them for sport, some to extinction. They are celebrated in taxonomic nomenclature, and their names are honored in more ways than one. Yet, when they are recounted, the attitude towards these histories is that they were collectors, undoubtedly overzealous, but respectable explorers and sport hunters in an era of abundance. To say national parks as fortresses were created to rehabilitate declining populations is common, but it could not be further from or be the only truth as these exploitative activities continued only for a chosen group of the population.

Conservation in Africa was driven by the commodification of natural resources. It is disingenuous to keep teaching history in a manner that denies this aspect on a continent that still bears the scars of the colonial conservation paradigm in its recent memory. Albeit we are educating a generation that is already far removed from their traditional heritage such that they now associate conservation to western culture.

To decolonize any space, it is essential to challenge and dismantle the notions that indigenous knowledge systems were, or are, inferior to western values and thought. We ought to move away from the biases that all worthwhile knowledge in conservation is foreign-imported on the African continent. The same level of consideration in research and reporting must be given to indigenous communities and how they interface with conservation. Everyone involved must reflect, study their own biases, and contemplate what informs their opinions on how things were, are, and should be.

While the world today has been adapted and designed with western society and ideology as the standard, we should not neglect to do the necessary work and denounce the systems that got us here. As such, teaching and describing the conservation of nature by Africans as a serendipitous, ignorant, unintended play of rules, beliefs, and superstition should not be acceptable practice anymore. If it has not been said before, I say it now: It is demeaning to those who find themselves in conservation as representatives and an embodiment of black African bodies.

As I have said before, conservation began in Africa. This is not just because we have the largest mammal species assemblages surviving on this continent of anywhere in the world. It is also not because of the accepted fact that Africans lived alongside wildlife and nature in harmony for centuries before. Instead, it is because there was an intentional effort in African communities to conserve and protect nature. This has to be stated clearly and must be understood by conservationists today because the common misconception and bias is presenting past African ways of living as having contributed to conservation as unintentional accidental happenings.

Decolonizing conservation means offering the same credibility, respect, and appreciation to indigenous ways of living and knowledge systems towards wildlife as the policies of settler communities. The typical attitude of rigorous questioning and pursuit for hard, irrefutable evidence when it comes to Africans, that their societies too were advanced and learned in science, is colonial thinking. I call it colonial not because the scientific process should not be followed as some apologetic nod to African culture, but because western society has long been offered the courtesy and benefit of being assumed to be intellectual, intentional, and visionary. When we seek to study or characterize indigenous beliefs, positive or negative, we ought to be mindful of this and check our biases and intentions to recognize that they have been marginalized from scholarship for a long time.

Conservation science was once a crisis discipline, often reactionary, but now strategy is prudent. Transdisciplinary and all-encompassing approaches are recommended. I have been referring to Africans and how conservation science should be decolonized to be relevant for them [us]. However, today, being African is an identity, and what it means to be African can be very complex to correctly articulate. Conservation scientists should not be tone-deaf or ignorant of what this translates to in their local landscape of influence. People have different motivations and values around conservation, so we should negotiate for middle ground and let science be at the forefront of our actions towards saving biodiversity. In so doing, we will realize that everything, including our beloved conservation subjects of focus, exists in landscapes—not just the spatial landscapes we are accustomed to, but also socio-political and temporal (historical and future) landscapes.

Considering the social landscape and the landscape of time, how they evolve, and what they have been before is paramount to our success and the sustainability of our efforts. Africa is not a pristine, virgin wilderness teeming with wild beasts (any more that is). But it is a home for all who choose to identify as Africans and embody what that means. At this point in history, we will not let our existence be overlooked. We are forever woven into the landscape, and any successful conservation work should be for, by, and with Africans.