Despite the many seizures of illegal wildlife products, the war is far from over.

By Peter BorchertSeptember 9, 2020Editorial
No Comments 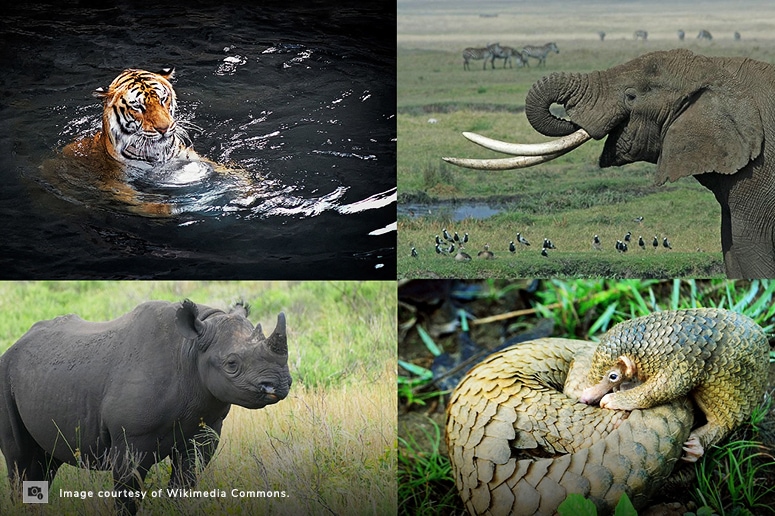 In October last year, alert customs officers at Hongqiao International Airport in Shanghai noted a box they suspected was filled with rhino horn. Instead of acting immediately, they watched as the baggage was claimed by a male passenger who then headed into a public toilet, where he was joined by two companion travelers. The three soon emerged with their backpacks—the horn had been moved between them—but their connivery was to no avail. All three were taken into custody, and pieces of horn weighing 9.97 kilograms were seized. After interrogation, the suspects admitted that they had been commissioned by someone in South Africa to take the contraband into China for selling. One of the perpetrators had traveled from O. R. Tambo Airport in Johannesburg via Hong Kong SAR, where he had been joined by the other two, all of them coordinating their movements via WeChat.

Traffickers go to great lengths to avoid detection. For example, also in 2019, 125 kilograms of horn were seized at Hanoi’s Noi Bai International Airport in Vietnam. The illegal consignment had been encased in plaster in an attempt to dupe customs.

A third seizure was part of a major operation in China involving 200 law enforcement officers working at multiple locations. All-in-all 22 people were arrested, and more than 300 animal products, including rhino horn, tiger skins, pangolin, lion bones, bear claws, and Delacour’s langurs were seized. Total value—US$11.26 million. Different illicit wildlife products are often smuggled together, and this particular bust revealed a smuggling gang that had been working between China and Vietnam for several years. Their convoluted tactics involved products sourced in Vietnam being taken to the Chinese border, where they were handed over to couriers. These middlemen would then take the contraband into China, where it would be handed over to several distributors. Again, WeChat was used to coordinate and fulfill orders.

Ordinary mail services are also enlisted by wildlife criminals. In fact, the abuse of postal facilities to move illicit wildlife products worldwide is by no means uncommon. The most significant event to date happened in 2017 when no fewer than 13 boxes of pangolin scales destined for one address in Hong Kong were seized by Malaysian customs officials.

These accounts are but a few of the seizures highlighted in USAID Wildlife Asia’s recently released Counter Wildlife Trafficking Digest: Southeast Asia and China, 2019. This five-year, US$24.5 million, regional counter wildlife trafficking (CWT) initiative, in collaboration with TRAFFIC, addresses the illegal trade in pangolins, tigers, elephants, and rhinos in Southeast Asia, particularly Cambodia, China, Lao People’s Democratic Republic (PDR), Thailand, and Vietnam. In addition to exploring seizures, it also spotlights key developments in conservation law and outlines some of the attempts to reduce demand.

In total, there were 82 pangolin seizures in the focal countries, involving the eight species of Asia and Africa, and 155,795 kilograms of “product,” mostly scales. Alarmingly, Ethiopia was fingered for the first time as an export point out of Africa.

As we know, pangolins are generally very small mammals—a scale weighs a mere five grams—so that means an awful lot of these inoffensive creatures get sacrificed. In one seizure alone, Chinese customs intercepted a shipment of 23,000 kilograms of pangolin scales originating from Nigeria, with Busan in Korea and Shanghai as transit points. The scales had been concealed among slices of ginger. Using the calculations devised by three painstaking scientists, this seizure alone must have led to the death of about 7,000 individual pangolins.

Tiger seizure statistics from the focal countries amounted to 34 incidents and some 552 kilograms of tiger products. Wild tiger products come mainly from Russia into China and South Asia into China and Vietnam. Captive tigers seem to be mostly trafficked through the Greater Mekong Region. North Korea has emerged as a major source of tiger bone wine, which is also believed to come from captive tigers.

Worryingly, two incidents in 2019 involved tiger bone products being trafficked from South Africa to Hong Kong SAR. Alone this perhaps doesn’t rate as significant, but previous research shows captive tigers having been euthanized and their parts smuggled from South Africa to Asia. And so, once again, South Africa’s reputation as a major supplier of legal and illegal products to the wildlife trade industry is highlighted. For example, a large seizure of 280 lion bones in Cambodia is believed to have originated from South Africa, presumably from captive-bred animals. But it is feared that demand for tiger products and substitutes could be putting pressure on wild lion populations as well.

Some 380 seizures of elephant products in 2019 involved the report’s focal countries, amounting to 48,217 kilograms of mostly ivory, but skin and tail hair too. Myanmar emerges as a key transit point for trafficked elephant products, while in Africa, there has been a shift in export points to Nigeria and Mozambique. This is thought to have resulted from a tightening of regulations and their implementation in previous hotspots such as Kenya, Tanzania, and Uganda.

Online trading has been a headache for law enforcement agencies for some time and is likely to continue growing. Elephants are particularly hard hit, as evidenced by the fact that 46 percent of illegal wildlife advertisements concern elephant products. A glimmer of hope comes from a coalition of the big online players, including Ten Cent, Alibaba, Google, and Facebook, who have set a goal of reducing online wildlife trafficking by 80 percent come the end of this year. I reckon that they face a challenge and a half if they are to meet that commitment.

In 2019 there were 34 reported seizures of rhinos involving the focal countries, totaling 519 kilograms of rhino products. Wildlife trade experts Lucy Vigne and the late Esmond Martin calculated the average horn weight to be two kilograms. As African rhinos have two horns, that equates to four kilograms per rhino. The seizures, therefore, suggest that 130 rhinos were killed for their horns. South African government stats show that 594 rhinos were killed in 2019, the lowest figure for many years. Relating seizures to actual poaching incidents is difficult to assess. But we know that seizures are, literally, just the tip of the iceberg—the rule of thumb seems to be that only 10–15 percent of globally trafficked wildlife is seized in any one year.

It all makes for pretty grim reading. Notwithstanding some successes in demand reduction efforts, and new laws and regulations across many export, transit, and end-user countries, it is clear that the scourge of illegal wildlife trade is far from spent. It is adaptive, ruthless, and insatiable. We have a long fight ahead.