Development of third Sumatran rhino sanctuary advances to save species 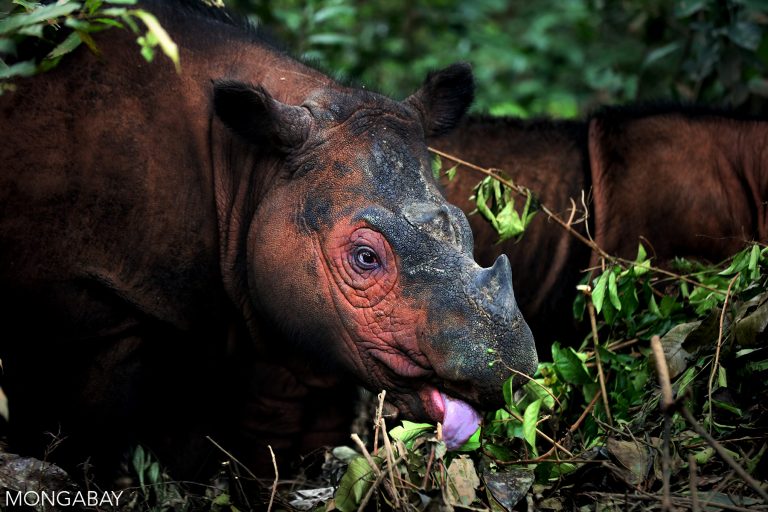 The development of a highly anticipated captive-breeding facility for Sumatran rhinos in Indonesia’s Aceh province is advancing as part of conservation efforts to save the nearly extinct species.

The planned facility, the third in the Sumatran Rhino Sanctuary (SRS) network, is one of Indonesia’s top strategies to help prevent the global population of the Sumatran rhino (Dicerorhinus sumatrensis) from going extinct in the wild. The new facility in particular is geared toward the sub-population surviving in the Leuser Ecosystem in northern Sumatra. The first SRS is inside Way Kambas National Park in southern Sumatra, and the second in eastern Indonesian Borneo.

“The consortium for developing the SRS in East Aceh district is still working on getting the permits,” Agus Irianto, head of the Aceh provincial conservation agency (BKSDA), said in May.

For the past couple of years, officials and experts — from the environment ministry, local government, academia and NGOs — have been working on the permits, feasibility and environmental studies, and developing the designs, including the detailed engineering design (DED) for the facility.

The proposed rhino sanctuary in Leuser will cover 100 hectares (250 acres) of an ecosystem that’s also the only place on Earth that’s home to rhinos, tigers, orangutans and elephants. According to the BKSDA, the area in question is a mosaic of logging forest, oil palm concession, and non-forest land, which the agency has been working to acquire to build the SRS.

Conservationists plan to use the facility for captive breeding of Sumatran rhinos, as they’ve managed to do at the Way Kambas SRS. Captive breeding is widely acknowledged as the best effort to save the species, down to fewer than 80 individuals in Sumatra and Indonesian Borneo. The environment ministry has said at least five rhinos will be captured from the wild in Leuser and moved to the sanctuary to kick off the captive-breeding program there.

The Leuser Ecosystem is touted by experts as the most promising habitat for wild rhinos because it’s believed to hold the largest population of the species, at about 12 individuals. But conservationists still understand little about the mountainous area, and the incidence of poaching there is believed to be higher than elsewhere.

The two existing SRS facilities are home to a total of eight Sumatran rhinos: The one in Way Kambas holds seven rhinos, two of them born there; the facility in the Kelian forest, in the Bornean province of East Kalimantan, is home to a single female rhino.

The plan to open the Leuser sanctuary was described in a decree issued by the environment ministry in December 2018, which also included proposals to double the capacity of the Way Kambas sanctuary; partner with Malaysia, which has a stock of harvested eggs for fertilization; and boost efforts to capture more rhinos from Borneo and house them in the Kelian sanctuary.

The Sumatran rhino once ranged across Southeast Asia, from the Himalayas in Bhutan and India, to southern China and down the Malay Peninsula. But it has been decimated by a series of factors, from poaching to habitat loss and, more recently, insufficient births.