Dogs to sniff out wildlife smuggling, with ban on sale of ivory kicking in on Sept 1 – Singapore 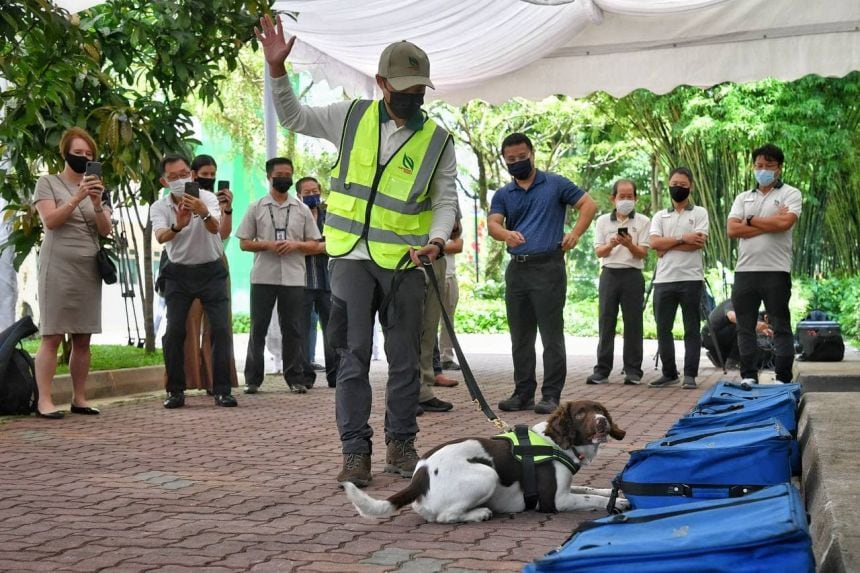 A dog handler from the NParks K9 Unit raises his hand after his dog identified a bag that contains illegal wildlife parts at the Centre for Wildlife Forensics. Image: As originally published by The Straits Times.

Sniffer dogs are being used at border checkpoints to detect the smuggling of endangered animals, and items such as elephant ivory and pangolin scales, to further clamp down on wildlife smuggling.

This new K9 unit under the National Parks Board (NParks) is specially trained to sniff out threatened and contraband fauna and wildlife products that may be hidden in cargo or luggage.

This comes as Singapore gears up for its ban on all trade in ivory, which will go into effect next week.

The dogs’ heightened sense of smell will allow them to detect items that may not be spotted by other methods, such as using radiographic scanners and visual inspections.

The dog breeds that comprise the K9 unit include Labrador retrievers and English springer spaniels.

The K9 unit was announced on Friday (Aug 27) at the official opening of Singapore’s first Centre for Wildlife Forensics.

Scientists at the centre, which has been operational for about a year now, have been closely studying animal and timber samples from illegal imports to identify the species and trace their source.

This would help authorities here and elsewhere in the region clamp down on syndicates involved in illegal wildlife trading, as well as poachers.

On Sept 1, Singapore’s ban on the domestic trade in ivory – first announced in 2019 – will kick in. From next month, the sale of elephant ivory and ivory products will be prohibited.

Those found selling such products, or displaying elephant ivory for sale may be charged under the Endangered Species (Import & Export) Act. They can be fined up to $10,000 per specimen, not exceeding $100,000, or jailed for up to a year, or face both punishments.

The ban includes ivory that was brought into Singapore before 1990, when the ban on international ivory trade was implemented by the Convention on International Trade in Endangered Species of Wild Fauna and Flora (Cites). Singapore is a signatory to this international agreement and convention.

“The trade in such pre-Convention ivory is currently not regulated, so once our upcoming ban takes effect, we will be able to close this loophole on our shores,” said Minister for National Development Desmond Lee at the centre’s official opening on Friday.

Mr Lee added that since the 2019 announcement of the ban, the authorities have been engaging the industry and the community to help manage their pre-1990 ivory stock.

The nationwide ban highlights Singapore’s resolve in the fight against the illegal trade in species listed under Cites, said NParks.

Mr Lee noted that putting an end to illegal wildlife trade is an ongoing process.

“We are… reviewing our laws to strengthen our regulatory regime and enforcement powers to tackle illegal wildlife trade. We will share more details when ready,” he added.

In April 2019, Singapore made the largest seizure of pangolin scales globally in five years. The numerous bags of pangolin scales and carved ivory in that cargo was hidden behind a shipment of frozen meat. Around 17,000 pangolins were killed for the scales in that shipment.

“The patterns of (such illegal shipments) are not fixed, and are pretty dynamic, and that’s why we have to always remain vigilant and increase our capacity in detection through the K9 unit,” said Dr Adrian Loo, NParks’ group director of wildlife management.

“The fight against illegal wildlife trade also has a strong conservation principle. Thousands of bags of scales will translate to many pangolins that were poached.”

The Sunda Pangolin – native to Singapore – is classified as critically endangered by the International Union for Conservation of Nature’s Red List of Threatened Species.

Over the past year, the new centre, at the NParks’ Animal And Plant Health Centre in Lim Chu Kang, has been busy identifying and analysing specimens seized from illegal wildlife trade. They include the body parts of elephants, rhinoceros, pangolins, sharks, rays and seahorses, as well as timber.

Dr Loo added that DNA methods are crucial to identify animal body parts that are unrecognisable, or crushed into powder.

Mr Lee said: “Over the past year, we have enhanced our systems and equipment, and improved our sampling and testing methodologies. This will allow us to identify specimens on a larger scale, more efficiently and rapidly.”

On top of helping with investigation, enforcement and prosecution, the new centre is working on two ivory and pangolin studies with a conservation biologist from the University of Washington in the US.

The ivory study analyses the genetic links between global ivory seizures from 1995 to 2019. The elephant tusks are genetically matched to identify samples from the same elephant, or from its close relatives. These matches could reveal links between parent and offspring found in different shipments.

The insights from the study will enable law enforcers to gather more intel about the criminal networks and the key elephant habitats that syndicates are targeting.

For the pangolin study, the scientists are developing methods that will help investigators analyse large numbers of dead pangolins, or pangolin parts.

Tapping on the loot seized in 2019, the researchers are creating DNA markers for all eight pangolin species that exist.