New information and footage reveals that the rhino was suffering from a broken leg rendering it vulnerable to attack from the hyenas. Initial reports suggested that the rhino succumbed to the relentless attack, however, it has since been revealed that the rhino was darted by wildlife veterinarians and its injury assessed. As no treatment could be administered, the animal was euthanised to relieve its suffering. The article below has been updated for accuracy.

Spotted hyenas have a nasty reputation as conniving scavengers (thanks a lot, Lion King). In truth, these predators often hunt for their meals and are more than capable of tackling sizeable prey especially if they work together. A series of dramatic photos taken by Jérémy Schalkwijk in South Africa’s Kruger National Park serve as evidence of just how formidable these carnivores can be. 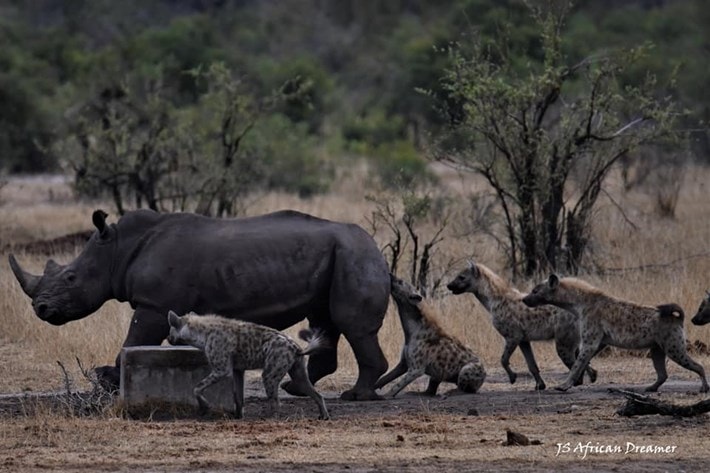 Recently uploaded to Facebook, Schalkwijk’s images show a rhino under siege from a small group of hyenas. According to the photographer and former safari guide, the five hyenas eventually overpowered their prey, but Schalkwijk was unable to capture the moment the behemoth fell as the attackers chased their quarry out of view (Editor’s note: it has been revealed that the rhino was, in fact, euthanised).

The incident took place in the early morning when the hyenas happened upon a trio of rhinos. One of the rhinos was limping, a noticeable weakness that may have enticed the predators to attack. Schalkwijk also noticed that the animal was missing the tip of its tail. He hypothesised that the limping could have been the result of a bout of rough sparring with another rhino, while the damaged tail was almost certainly nipped off by a brazen predator. Kruger National Park sales representative Danie Bester who captured the footage embedded below has since confirmed that the hyenas were responsible for removing the rhino’s tail.

The hyenas honed in on their target. The rhino bystanders initially rallied together to protect their imperilled comrade, but soon turned their attention to grazing instead, leaving the victim to fend off the clan on its own. After a considerable tussle, the predators chased their prey into a dry riverbed.

Although they are rarely witnessed tackling such sizeable prey, hyenas are opportunistic hunters and will capitalise on any available mea. Some who saw the latest hyena-vs-rhino showdown speculated that the rhino may have been in a weakened state as a result of a recent drought.

The animal also appears to be a juvenile. Rhino calves are at greater risk and usually stick close to their mothers for protection. Last year, a rhino in Kenya was filmed protecting her calf from a pair of marauding hyenas, while a more tragic incident was captured on camera in the Kruger Park involving a rhino mom who stood guard over her stillborn baby while a clan of hyenas tried to get at the carcass.

Perhaps the strangest hyena-rhino interaction comes from Londolozi Private Game Reserve in northern South Africa. Ranger Dean Smithyman was watching a pride of lions feeding on a buffalo carcass when a solitary rhino wandered onto the scene. At least 15 hyenas were hanging around looking to snatch a piece of the meal and the lumbering herbivore headed straight for them. The rhino bull strolled to within a metre of the clan and paused. One of the hyenas stood up and began sniffing the rhino’s rear end.

“What happened next was even more bizarre,” the Londolozi team explain on their blog. “The rhino bull lifted his tail and backed into the hyenas … allowing them to lick his backside and genitalia!” This happened several more times much to the shock and confusion of Smithyman. The reason for the behaviour is a mystery even for the experienced Londolozi team.