By NewsroomOctober 25, 2021Conservation
No Comments 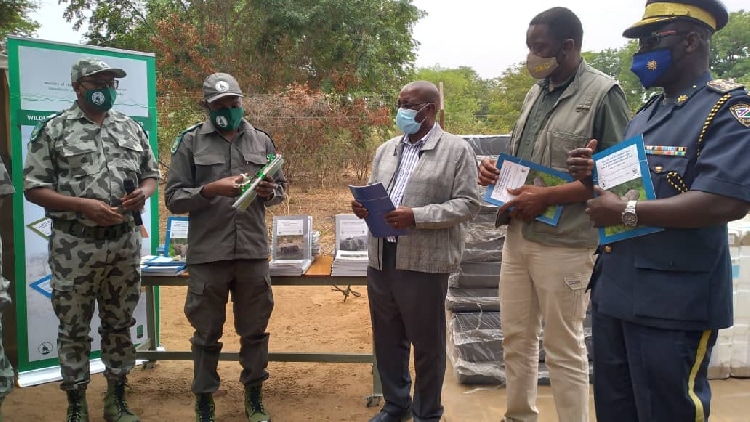 The team involved. Image: As originally published by The Namibian.

Environment, forestry and tourism minister Pohamba Shifeta has revealed that Namibia’s elephant population has grown to an estimated 23 736 since independence.

Shifeta made the remarks during the launch of  Wildlife Management Plans, Conservation Strategies and handover of equipment to the anti-poaching unit in Bwabwata National Park on Thursday in Zambezi region.

According to Shifeta, during the process of developing the National Elephant Conservation and Management Strategy, they have  established that elephants have not just increased in numbers, but have also expanded in range.

“The elephants are now also found in areas from which they went locally extinct more than 50-70 years ago,” he said.

He added that the recent sale of elephants has not threatened the country’s elephant population, while also clarifying that none of the elephants living in the arid north-western part of Namibia are and will be affected by the sale.

“ I wish to call on each and every Namibian to dismiss the reports circulating on social media about the status of the elephants in Namibia. We conduct regular aerial surveys using internationally acceptable best practices to arrive at the elephant number estimates. There is simply no truth in some media reports that we inflate elephant numbers, or that we don’t have a clue on the number of elephants in Namibia,” he said.

The deputy police inspector-general Joseph Shikongo, who read the remarks on behalf of police inspector general Sebastian Ndeitunga, noted that the extreme poaching that the country has experienced in the past decades has brought a lot of challenges, however, they have implemented counter measures to spearhead wildlife protection in the affected areas.

“While partners can be proud of the turnaround that has been achieved in protecting our natural resources, there is no room for complacency. The fight against wildlife crime is ongoing, “ he said.