By Peter BorchertApril 28, 2021Editorial
No Comments 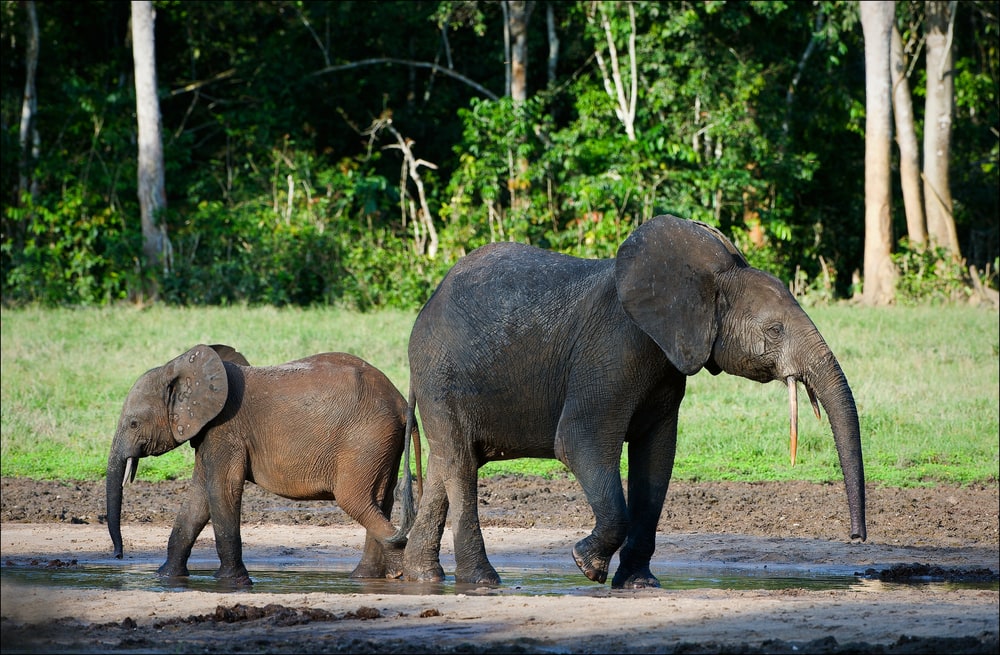 During the early years of the current century, an arcane tussle was underway regarding the naming and classification of elephants. The African and Asian elephants split from their common ancestor some 7,6 million years ago; the scientific record is clear on that. It is also clear that all the elephants in Asia today belong to a single species—Elephas maximus.

In Africa, things played out differently. About 3,5 million years ago, the continent’s rainforests began to recede and give way to savanna. Some elephants ventured from their jungle stronghold to explore the new grassland habitat and must have found it to their liking as they stayed. Then, with climate changes around 2,8 million years ago, the separation of forest and plains-dwelling elephants became further entrenched. The question asked by taxonomists was if the intervention of time between then and now had resulted in the emergence of two separate African elephant species or if all African elephants remained part of one monolithic entity, Loxodonta africana? Some argued fiercely that time, together with genetic and morphological differences, were sufficient grounds for separation, while others pointed to evidence of hybridization as a convincing case for the single species argument.

In 2010, the issue was finally settled when scientists using detailed genetic analysis proved that the African savanna elephant and the smaller African forest elephant have been distinct species for several million years.

“The split between African savanna and forest elephants is almost as old as the split between humans and chimpanzees. This result amazed us all,” said Professor Michi Hofreiter, who specializes in the study of ancient DNA in the Department of Biology at the University of York in the U.K.

So, now we have the African bush elephant Loxodonta africana and the African forest elephant Loxodonta cyclotis. From a lay perspective, one could be forgiven for dismissing the academic skirmish and its outcome as irrelevant. However, given how the conservation issues facing forest and savanna elephants have unraveled over the past 20 years or so, the arguments around “one species or two” have become highly pertinent to the future of African elephants. This is especially so because the IUCN continued to assess Africa’s elephants as a single species until very recently.

Then on March 25 this year, came this sobering statement from the IUCN: “Following population declines over several decades due to poaching for ivory and loss of habitat, the African forest elephant (Loxodonta cyclotis) is now listed as Critically Endangered and the African savanna elephant (Loxodonta africana) as Endangered on the IUCN Red List of Threatened Species™.” Prior to this, African elephants were treated as a single species, listed as Vulnerable.

One can’t help but wonder what took this august body so long. Agreed, science grinds along at its own pace, but the taxonomic debate has been settled for well over a decade, and surely the wheels of the IUCN could have turned with a little more urgency.

Of course, those concerned with the fortunes of elephants don’t need the IUCN’s assessment to understand that Africa’s elephant population has tumbled catastrophically over the centuries, a situation that has accelerated in recent decades. Consider this: in the 1500s, Africa’s elephants numbered some 26 million. Four centuries later, just before World War I, the population had dropped to 10 million, and by 1979, only 1,3 million remained. The most recent assessment, the IUCN’s 2016 African Elephant Status Report, then revealed the appalling fact that there were only about 415,000 elephants in all of Africa and that the continent’s elephant population had seen the worst declines in 25 years, mainly due to poaching.

Then, if you drill down a bit further, the picture gets even darker. The Great Elephant Census Final Report, also published in 2016, revealed that savanna or bush elephants numbered about 350,000 of the totals, suggesting fewer than 100,000 forest elephants remained. Now, the World Conservation Society (WCS) reckons that Central Africa’s rainforests have lost over 60 percent of their elephant population in the past decade. “The current population estimate stands at a shocking low of 40,000,” says WCS, explaining that the lucrative illegal ivory trade aligned with habitat loss, fragmentation, and degradation, political instability, and human-elephant conflict has created one of the most serious conservation crises of our time.

Against this backdrop of seemingly unstoppable carnage, it is difficult to imagine that there could be any justification for promoting a consumptive use of Africa’s elephants. And yet, this is precisely what the continent’s southern alliance of elephant range states suggests, particularly Zimbabwe, which has announced its intention to sell licenses to hunt up to 500 elephants during the coming dry winter months. There is nothing particularly remarkable in this news as, along with South Africa, Namibia, and Zambia, Zimbabwe has, for decades, been one of Africa’s top trophy hunting destinations. This is particularly so for Americans as the United States is by far the largest importer of sport-hunted trophies in the world. However, the rationale behind the number of licenses up for grabs this year is summed up in a word—Covid.

The devastation that the pandemic has visited on the global travel industry is well documented and has been deeply felt in destination countries everywhere. Zimbabwe has been no exception. Its historically buoyant photo-safari sector ground to a halt early last year and has remained moribund for well over a year as successive waves of the disease continue to sweep the world. The country’s national parks are not supported by the central government, and Zimbabwe Parks and Wildlife Management Authority (ZPWMA) is totally reliant on tourism revenue for salaries, development and upkeep, conservation services, and, critically, anti-poaching efforts. Bluntly put, no tourism means no money to protect wildlife.

The cost of an elephant trophy license ranges between US$10,000 and US$70,000, depending on the size of the animal. So, a total income in the region of $50 million could reasonably be expected, a potentially life-saving boost for the organization. In reality, revenues will be considerably higher given the addition of fees charged by professional hunters for their guiding services, taxidermy fees, and accommodation.

While few, other than the trophy hunters themselves, would actually celebrate the death of so many elephants, many conservationists would argue that if the revenues from the hunters enable the basic care and protection of the country’s prime conservation areas to continue, then the end justifies the means. This, after all, is conservation realpolitik in action.

While I find trophy hunting unpalatable as a concept and in practice, within the broader context of Zimbabwe’s conservation dilemma, it is hard to punch holes in the rationale behind the sale of hunting licenses or to suggest any other immediate options for generating the funds required for Zimbabwe’s cash-strapped parks.

Zimbabwe’s elephant numbers seem to add further weight to the argument for the sale of hunting licenses. Against the appalling decline in elephant numbers almost everywhere in Africa, the country’s population reportedly now stands at more than 100,000, while according to ZPWMA, the carrying capacity of the land is only 45,000 elephants. Neighboring Botswana’s national herd stands at some 130,000, so together these two southern African countries alone account for more than half Africa’s total elephant population (bush and forest elephants combined) of no more than 415,000.

Statistically, therefore, the loss of 500 elephants from Zimbabwe’s 100,000-strong national herd seems insignificant. But the reality is a little more complex than that.

Old male elephants are frequently the favored targets for trophy hunters, quite simply because they are the biggest specimens in any group of elephants, and they are likely to have the largest ivory. Hunters have long justified their choice, claiming that these elderly bulls are past their breeding prime and therefore effectively “redundant” in elephant society. But this has been robustly challenged by the authors of a study suggesting that these old males are, in fact, highly relevant to herd dynamics. Not only do they have high status in all-male groups, but they also impart their knowledge of food and water sources to younger, less experienced bulls who, from the age of about ten onwards, are forced from their maternal herds to start living independently. Furthermore, far from being spent forces in the breeding stakes, the elderly bulls actually sire the most offspring. So, when their genetic contribution and life experience are selectively removed from a population—which is exactly what trophy hunting and poaching do—the detrimental impact on the wider elephant society is potentially significant. The number of elderly male elephants in the study group showed a decline, which is simply not sustainable. Possibly the greater risk, however, is the distinct probability that as the forest elephants of Central Africa are driven ever closer to extinction and poachers find it increasingly hard to locate and kill the dwindling residue, they will increasingly turn their focus to the bush elephants of East and Southern Africa to fulfill the demand for ivory. Faced with such an onslaught, I find it hard to believe that we will be any better at dealing with it than we have been in protecting rhinos. And the fact that so many bush elephants are concentrated in just two countries—Zimbabwe and Botswana—could prove little more than a logistical convenience to powerful, well-organized wildlife crime syndicates.

So, while the sale of 500 licenses to hunt elephants may appear to be something of a solution to a genuine and present funding crisis, it has little merit as a strategy for the longer term. Furthermore, the record of African governments regarding corruption and transparency leaves a lot to be desired. And Zimbabwe is amongst the worst—it ranks joint 160th out of 180 countries in the 2016 Transparency International Corruption Perceptions Index. So, the question must be asked: will the $50,000 plus that might accrue from the killing of 500 elephants go towards vital conservation priorities, or will much of it find its way into the foreign bank accounts of a powerful few.