By NewsroomMarch 31, 2020Anti-poaching, Conservation
No Comments

It is one of life’s great ironies that one of South Africa’s most valuable anti-poaching resources would probably not have existed if not for a particularly devastating poaching incident, which helped set a clear path for a lifelong conservationist.

For founding director of Stop Rhino Poaching Elise Serfontein, the idea of starting a website to create awareness and support for the war against rhino poaching came to her after taking a nap on a Sunday afternoon. She always knew she would eventually get into rhino conservation, but until that moment, her path was unclear.

“My boss phoned me and said it looked like what appeared to be another helicopter poaching incident. I was absolutely devastated, because this was potentially someone in our industry. It was a Sunday afternoon and I was crying my eyes out and I fell asleep. It was so weird, as I woke up, I knew I needed to build a website,” she said in an interview with Saturday Citizen.

Since what was probably Elise’s most enlightening nap 10 years ago, Stop Rhino Poaching has turned into an invaluable resource for South Africa’s anti-poaching war, especially for the rangers on the ground bearing the brunt of large-scale syndicates that continue to decimate rhino populations across the country. 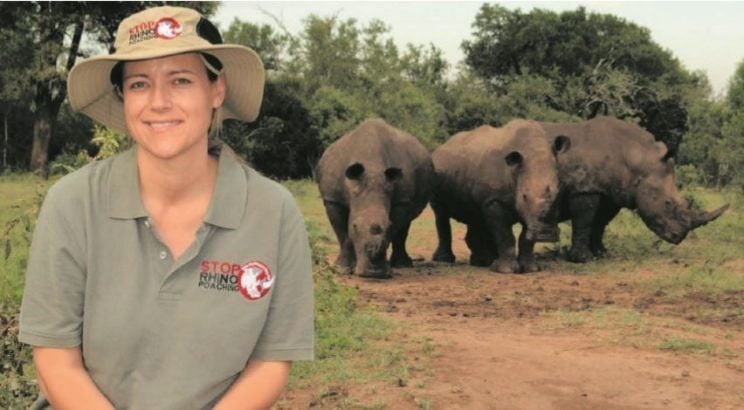 Original image as posted by The Citizen: Elise Serfontein, founding director of Stop Rhino Poaching, in her ‘office’.

And the journey has definitely been a personal one.

Serfontein said Stop Rhino Poaching “was kind of a calling”.

“It’s become personal because one becomes involved in the lives of so many people out there who are trying so hard to stop this. And you realise the impact it has on them. It’s because of them that I can’t stop.”

Often deflecting questions directed at her, Serfontein speaks of her “band of brothers” – those involved in the physical fight against poaching – as her motivation to keep going, no matter how taxing it becomes.

Serfontein and rangers are exposed to disturbing, morbid scenes on a regular basis – something that takes its toll. But their friendship binds them together and keeps her grounded.

When asked how she copes mentally with the scenes she is exposed to, she says she forces herself to keep going.

And why she does this is simple: “My exposure is nothing compared to what they’re exposed to.”

Serfontein also uses gestures from donors as a way to keep going.

“Someone sending an e-mail saying we love what you’re doing, we can see that the funding is going to the right places and that you’re delivering on what you say you’re going to do, here’s five grand or whatever. It’s just that little extra nudge to realise we must all carry on fighting and believing.”

But Serfontein is only human – and although remaining optimistic and driven by her team is essential to help keep the existential dread at bay, sometimes all a person can do is cry and drink beer.

The look on a ranger’s face when they realise what people from around the world who they will never meet are contributing to make their job more manageable, she says, is an unforgettable moment that never gets old and something that will keep her going.

“To make a difference in somebody’s life like that means he can go out there and make a difference for our rhinos. And that is a hugely motivating factor that I reflect on to keep me strong, focussed and determined.”

Staying on track, no matter how muddy the path is, is essential for someone like Serfontein, who does not know of a life of free time, saying she’s not a free-time kind of person.

“I’m not an exotic island girl,” she proclaimed proudly, adding that if people want to get away from everyday life, many gravitate to the bush – or as she refers to it, her office.

She has a prominent part to play in helping prospective donors or budding conservationists understand how complex, yet rewarding, the work she does is.

“Once you weave the story together of how complicated this all is and give them an idea of how it’s affecting the people who are on the frontlines, it gives them a different and personal perspective, compared to what they might read about in the media.”

The passion Serfontein has for people and animals is palpable and the reasoning behind this was summarised perfectly: “Our tourism industry is there because of our wildlife – and the people who safeguard that are critical – it’s thanks to them that those areas are there in the first place.”