By NewsroomNovember 19, 2019Conservation, Science and technology
No Comments

The United States (US) ambassador to Uganda, Ms Deborah Malac, has said modern technology will help combat wildlife trafficking in the country and the region at large.

“While Uganda and responsible members of the international community work together to continue fighting trafficking in traditional ways, the advent of technology as part of the solution is a game changer,” she said.

Ms Malac made the remarks during the opening of a two-day conference for conservationists and IT experts at the weekend at the Uganda Wildlife Education Centre (UWEC) in Entebbe. 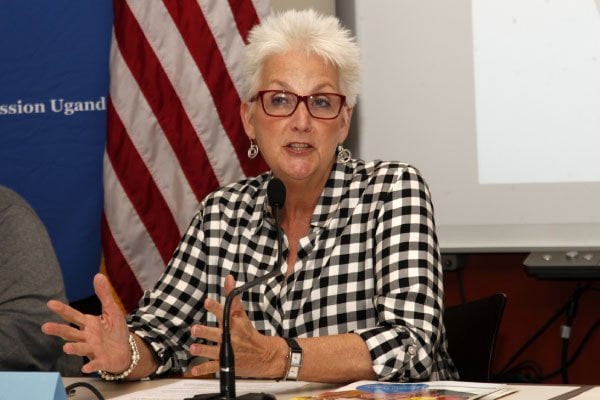 Original photo as published by Daily Monitor: US Ambassador Deborah Malac addresses a press conference at the US Embassy in Nsambya, Kampala, in June. She says African countries need to embrace technology to combat wildlife trafficking. (PHOTO: RACHEL MABALA)

“DNA collection and analysis allows investigators to pinpoint the origin of illicit ivory and focus enforcement in high risk areas to deal with the challenge of patrolling vast harsh landscapes. Researchers are using thermal imagery cameras to track illegal entry into parks and restricted areas,” she said.

Ms Malac said wildlife trafficking not only affects the country’s eco system but also tourism. She added that unless the trafficking is eliminated, economic growth cannot flourish. The ambassador said the US government is committed in partnering with other countries to support global anti-poaching efforts.

“Trafficking is a real and serious problem in Africa. An elephant is killed for its ivory on average every 15 minutes even though many countries, including most recently China have moved to institute a ban on the ivory trade. In 2016 poachers killed more than 13,000 African rhinos and an estimated 100,000 pangolins are captured every year making them the most trafficked animals,” she said.