By NewsroomMay 31, 2021Science and technology
No Comments 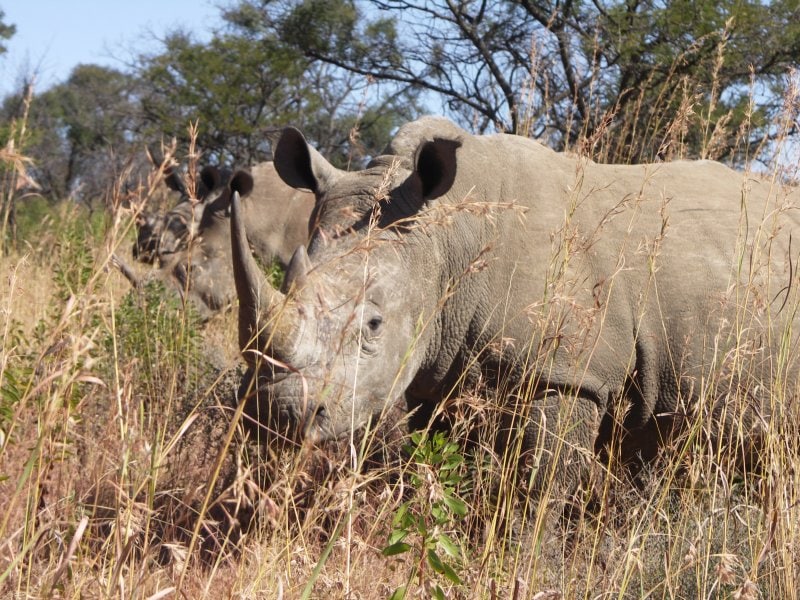 In South Africa, both the government and private conservation entities have been grappling with the unprecedented rate of animal poaching, which has led to a section of them being classified as endangered species.

Out of an estimated 29,000 rhinos in the world, 80 per cent are in South Africa, making it a key nation in rhino conservation efforts.

But the country has had to contend with alarming cases of poaching, with poachers becoming more lethal and sophisticated by using powerful guns and, at times, improvised explosive devices. So serious was the situation between 2013 and 2017, that over 1,000 rhinos were poached every year. Their horns are sold in Asian countries where demand has been on a steady rise due to their purported medicinal value.

To protect the endangered animals, both government and private players have had to spend millions of dollars in surveillance and modern equipment which has been credited with the falling numbers of poached animals. In 2020, 394 rhinos were poached, representing a 33 percent decline compared to the 594 killed in 2019.

Kruger National Park, which is located in northeastern South Africa and is one of the largest African game reserves and home to rhinos, elephants, buffalos, lions and leopards, spends more than $13.5 million each year on various anti-poaching programmes. It has invested in dog tracker packs, helicopters and support from South Africa defense forces, and employs the most highly trained anti-poaching force in Africa.

To ensure dedicated animal protection, Kruger National Park has divided the land into 22 sections. A ranger and a team of field rangers are responsible for each section. Yet even with this elaborate security detail, the park had lost 327 rhinos in 2019 and 421 in 2018.

South Africa’s 330 private rhino owners, who are responsible for caring for over 7,000 rhinos, have voiced their concerns over the high cost of protecting the endangered animals.

Tech to the rescue

As both government and private players explore innovative and sustainable ways of boosting wildlife conservation, a group of techies and environmentalists are embracing blockchain and cryptocurrency in a model that seeks to reward investors while committing the proceeds to conservation projects across South Africa.

Wild Card, the company behind the initiative, has over the years explored unique ways to disrupt modern conservation space and contributes R92 million ($6.4 million) every year on conservation.

A wildcard represents a digital version of an animal with the guardian committing a monthly donation in order to continue being the guardian of the digital animal. These donations are then sent as ether coins to the digital wallets of various conservation projects. Adopting the Harberger tax model, the platform allows the guardian to decide the amount that another user needs to pay for them to become the new guardian of the specific endangered species. The guardian however has to also pay the harberger tax, which is a percentage of the selling price that they have set.

The platform developed three digital hyena wildcards  in partnership with ecologists from the Wild Tomorrow Fund in order to support the MunYaWana Spotted Hyena Project, which has embraced GPS collar technology to tame the dwindling hyena population in northern KwaZulu Natal.

“At Wild Tomorrow Fund, we believe that innovative technologies such as blockchain and cryptocurrencies have the potential to connect new audiences to conservation, changing how we interact with and join together as a global community to protect our planet’s precious biodiversity,” Wendy Hapgood, Wild Tomorrow Fund’s co-founder & Chief Operating Officer, said in a statement.

The Crypto-backed conservation has been hailed as transformative for being transparent and auditable by allowing any investor track where their investment is being directed to while eliminating the number of players involved in the transactions, therefore facilitating a speedy donation process. The prompt payment by donors from any part of the world has reduced the high cross-border transaction fees.

WildCard is one of the many disruptive conservation models being rolled out as governments, private sector players and development partners navigate innovative strategies that reward investors, while positioning conservation as a worthy investment that individuals and companies can embrace and earn from shifting the focus from the traditional model that has been a preserve of governments and philanthropists.

The first-of-its-kind global wildlife conservation bond, which will be sold over the course of this year, will give conservation investors a chance to earn from their investment and re-invest their earnings in other projects of their choice.

Investors’ returns will hinge on population growth of the animals in two South African reserves.