Engelbrecht loses the battle and now also the war

By NewsroomFebruary 18, 2021Law & legislation
No Comments 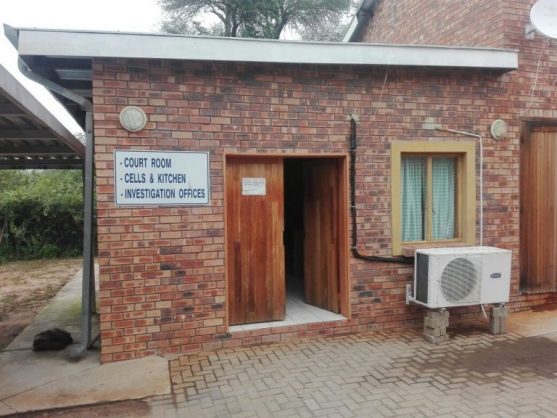 The Skukuza Regional Court. Image: As originally published by the Lowvelder.

The last shot in the ongoing battle between Naomi Engelbrecht, the Regional Court president of Mpumalanga, and a High Court judgement in which she was instructed to move cases from the Mhala Regional Court back to Skukuza, has been fired.

With this last shot in the salvo between her and a full bench of High Court judges, she has now also lost the war. The Constitutional Court also rejected Engelbrecht’s motion last week to appeal against a judgement against her last January.

Engelbrecht insisted she had the power to move the Skukuza Regional Court to wherever she wished, this is even though she has now lost three motions of appeal. The case against her culminated from a threat in 2017 when she had indicated she wanted to move the Regional Court from Skukuza to Mhala, about 100 kilometres away.

The Regional Court plays a major role in especially the fight against rhino poaching. In August 2019 Engelbrecht announced that the court will be moved to Mhala with immediate effect. Despite objections from various parties, among others, the Department of Justice and its minister (her employer), the Department of Environmental Affairs and Fisheries, the Kruger National Park (KNP) and SANParks management, environmentalists, international animal care groups as well as the director of public prosecutions, Engelbrecht point-blank refused to reverse her decision.

She instructed the Regional Court judges sitting at Skukuza to postpone all rhino-related cases to Mhala. At the time Judge Francis Legodi, judge president of the Mpumalanga High Court, intervened. On numerous occasions, in an amicable way, he unsuccessfully tried to convince Engelbrecht that she was not legally empowered to make such a decision on her own.

In December 2019, Legodi, in writing, instructed that her decision was unlawful and that it should be reversed. Once again, she refused. In a slanting email she told the judge “(I) chose to ignore the directives” and that “you will hear from me”. He then requested that the matter be heard before a full bench of judges.

In February, the case was heard by Judge Bernard Ngoepe (retired judge of the Northern Gauteng High Court), retired Judge Cynthia Pretorius and acting Judge Moira Mankge. They made a unanimous finding that not only was Engelbrecht’s decisions unlawful, but that the way she had spoken to Legodi was disrespectful and belligerent.

She appealed against the findings, but it was rejected by the three judges. She then appealed to the Supreme Court of Appeals in Bloemfontein where once again it was rejected by a bench of five judges. Then, in a final effort to try to get the judgement reversed against her, she applied to the Constitutional Court for leave to appeal. Last week, in a one-line judgement, nine judges of the Constitutional Court said her “leave to appeal is dismissed as it bears no reasonable prospects of success”.

Ken Robertson of the Freedom Front Plus said the attempts by Engelbrecht to move such a specialist court with a proven track record against poachers, only benefited rhino poachers. “The legal proceedings were a waste of taxpayers’ money,” he said. Adv Erik van der Merwe, the prosecutor for the director of public prosecutions, said they were extremely pleased with the judgement.

“After last week’s news of Kruger’s dwindling rhino population, we’ve needed some good news,” said Elise Serfontein of Stop Rhino Poaching. “This is a huge breakthrough for everyone who fought to keep the court open, but even more so for the rhinos and the rangers whose lives are now so deeply entwined in years of having to give evidence in poaching cases.”

She said the two big questions now are how quickly can the court be opened and what disciplinary processes Engelbrecht will face. In their original judgement last February, the High Court judges said the Engelbrecht case must also be submitted to the Magistrate’s Commission for further investigation and possible action against her.

In its response, SANParks welcomed the decision by the Constitutional Court to dismiss Engelbrecht’s application for leave to appeal. “We are happy with the decision by the apex court and look forward to the continuation of operations at the Skukuza Regional Court,” said Gareth Coleman, managing executive of the KNP.

He said the court had undergone refurbishment during the legal battle and it is ready to hear cases, especially those related to rhino poaching in the Kruger. At the time of going to press, Engelbrecht could not reached for comment. When her response has been received, it will be published and updated.