By NewsroomOctober 5, 2021Wildlife Crime
No Comments 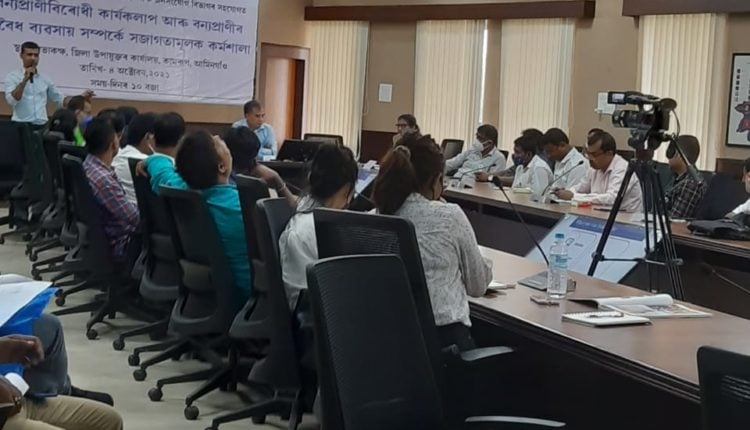 Media taking part in the workshop. Image: As originally published by The Shillong Times.

In view of burgeoning trade in wildlife and parts of endangered/rate wildlife species, media persons working in the field are expected to get enlightened on this clandestine trade involving wildlife that has metamorphosed into a threat to national security because it getting intertwined with global illegal trade of arms and contraband drugs.

With this objective in mind Northeast’s premier biodiversity conservation and research organisation, Aaranyak (www.aaranyak.org)  under its umbrella initiative Disrupt and End Trade in Endangered and Rare Species (DETER), today organised an awareness workshop for a group professional journalists from Kamrup and Darrang districts of Assam in collaboration with District Administration Kamrup and office of the District Information and Public Relations Officer (DIPRO), Kamrup.

The interactive workshop with journalists in fact, marked the formal launch of DETERS at the Conference Hall of the District Development Commissioner (DDC), Kamrup, Narsing Bey Aaranyak also presented tokens of DETERS to all the participants.

Inaugurating the workshop, the DDC lauded the Aaranyak’s initiative to raise awareness level on wildlife crime among journalists who can very well play key role in mitigating wildlife crime and facilitate better conservation of wildlife.

He said diverse wildlife resources of Assam and Northeast India as a whole would be always under the hawkish eyes of international wildlife crime rackets as long as there is demand for wildlife parts in certain parts of the world. He hoped that the workshop would go a long way in eliciting adequate response from media persons in protecting wildlife in our landscape.

The DIPRO, Kamrup, Manju Rani Deka said media which is a powerful organ of Indian democracy, can very well play a proactive role protection wildlife and mitigation of wildlife crime and trade in wildlife.

Speaking on the occasion, Dr. Bibhab Kumar Talukdar, Secretary General and CEO, Aaranyak gave an overview on various conservation and research initiatives of Aaranyak to check wildlife crime in the region. He also mentioned about the importance of collaborations with various agencies to bolster the fight against wildlife crime with a focus on rhino poaching.

He pointed out that trade in wildlife parts is now worth about 23 billion US dollars and 4th largest illegal trade in the world after trade in contraband drugs, arms and trafficking. This has now become a threat to the national security as illegal weapons trade and militants have become involved in the trade now.

“In order to facilitate a concerted tirade against wildlife crime and illegal trade, Aaranyak’s LAD have been interacting with judiciary, police and paramilitary forces like BSF, SSB, ITBP, CISF highlighting the role they can play in mitigating crime against wildlife,” Dr Talukdar said.

He said Aaranyak is well aware of the importance of people’s role in facilitating conservation of wildlife and protection of habitats. Hence Aaranyak always strives for creating livelihood options for fringe area people and effective networking with key stakeholders like media,” Dr Talukdar said while highlighting feats achieved by Aaranyak throughout its 32 years’ journey so far.

Explaining about the DETERS initiative, Ms. Ivy Farheen Hussain, Wildlife Crime Analyst, Aaranyak talked about the various goals and objectives under the initiative while also giving the audience a brief about the theory of change this initiative aims to fulfil. Ms. Ivy who also conceptualized the logo of DETERS, points out the importance of media in the society and how its engagement will be crucial to deterring crimes against wildlife in the region.

Senior Manager of Legal and Advocacy Division (LAD) of Aaranyak, Dr Jimmy Borah made a lucid presentation on the illegal wildlife trade before the journalists and exhibited pictures of wildlife and wildlife parts that are being traded globally with the objective to elicit active support from the professional media personnel in mitigating wildlife crimes.

Dr. Jimmy Borah in his presentation urged the media outlets/agencies to develop skills to identify, compose, review and publish wildlife crime stories. He flagged the importance of enlightening on the emerging illegal trade of wildlife trade, its derivatives and trade routes- which would ultimately develop appropriate response chains both nationally and internationally. He said there should be proportionate emphasis on trafficking part too while reporting on poaching incidents.

“Workshops as such this is crucial to achieve the large-scale consciousness this initiative hopes to achieve. The active response from the media houses would also highlight and establish their commitment and collaboration towards having a crime-free society and help in safeguarding its natural heritage and protecting its natural resources from illegal wildlife trade,” he said.