Environment, Forestry and Fisheries on rhino poaching decreases by more than half in the first half of 2020 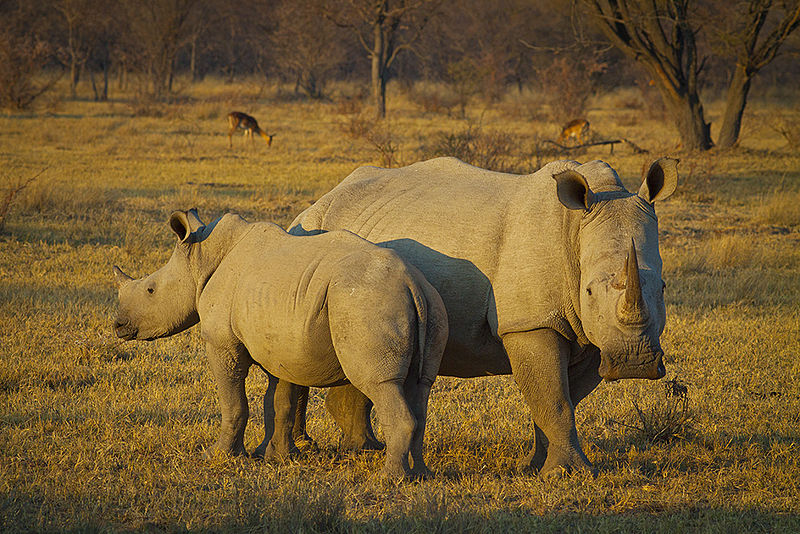 Rhino poaching has decreased by almost 53% in the first six months of 2020, with 166 animals being killed for their horns across the country since the beginning of the year.

During the first six months of 2019, 316 rhino had been poached in South Africa.

“After a decade of implementing various strategies, and campaigning against ever increasing rhino poaching by local poachers recruited and managed by crime syndicates, efforts are paying off,” said the Minister of Environment, Forestry and Fisheries, Ms Barbara Creecy.  “We have been able to arrest the escalation of rhino losses.”

The Minister said with the Covid-19 associated countrywide law enforcement measures to restrict movement the decline in rhino poaching compared to the same period last year is striking. This reprieve was specifically welcome in the Kruger National Park where during April, no rhino were killed in the Intensive Protection Zone for the first time in almost ten years.

In the Kruger National Park, 88 rhino were poached in the first six months of 2020.  As the lockdown restrictions have gradually been lifted so the rhino poaching incidents have slowly increased.

Despite attempts to smuggle rhino horn valued at around R115 million through O R Tambo International Airport in the first two weeks of July 2020, the decrease in rhino poaching can also be attributed to the disruption of the supply chain resulting from the national travel restrictions, including limitations placed on movement across the country.

“The diligence of SARS customs officials and members of the Green Scorpions that resulted in the consignments being uncovered, and the resulting arrest by the Hawks of a shipping agent, is a prime example of the excellent relationship and teamwork between departments and entities to stamp out the illicit trade in rhino horn, and other wildlife products,”  said the Minister.

Notwithstanding the severe interruptions of operations during the lockdown period the performance data relating to rhino-related prosecutions, indicated that a total of 23 accused were convicted. During the reporting period, January to June 2020, the National Prosecuting Authority managed to, not only obtain convictions in 15 cases, but maintained a remarkable conviction rate of 100%. In addition to these high conviction rates, lengthy sentences were also imposed by the courts.

In celebration of World Ranger Day today, the Minister paid tribute to the men and women whose commitment to protecting the country’s natural heritage, sometimes at the expense of their own safety.

“Our rangers have remained at the forefront of the battle against poaching, despite the National Lockdown, contributing to the decrease in poaching. In this time, rangers have had to face not only the threats posed by poachers, but they, and their families, have also had to deal with the danger of contracting Covid-19,”  said the Minister.

World Ranger Day, which is supported by the International Rangers Federation, is held annually to commemorate those rangers who have lost their lives in the line of duty, and to celebrate the commitment of rangers who battle poaching in protected areas on a daily basis.

To support the efforts of rangers, the Department, in collaboration with the provincial conservation and parks authorities, the private sector and NGO’s, continues to implement the decisions of the Rhino Lab with the latest initiative focusing on demarcating specific wildlife zones to ensure that additional resources are directed to high risk areas. The Department is also in the process of establishing the Environmental Enforcement Fusion Centre, which is aimed at coordinating and improving the reactive and proactive response to rhino poaching and other wildlife crime. It has begun to consolidate rhino protection efforts across the country, standardising and boosting tactical level anti-poaching and introducing integrated information-led enforcement.

This work further strengthens the essential collaboration with the South African Police Service, the Directorate for Priority Crime Investigation (HAWKS), the Department of Justice, and other sectors of the security forces to gather, analyse and share intelligence on wildlife trafficking so that the international syndicate-related crimes can be effectively dealt with.

“The dedication of essential staff, particularly our rangers, during this time is to be commended. Your hard work, and the support of your families, has not gone unnoticed,” said the Minister.

Below is a graphic depicting the statistics for 2020: 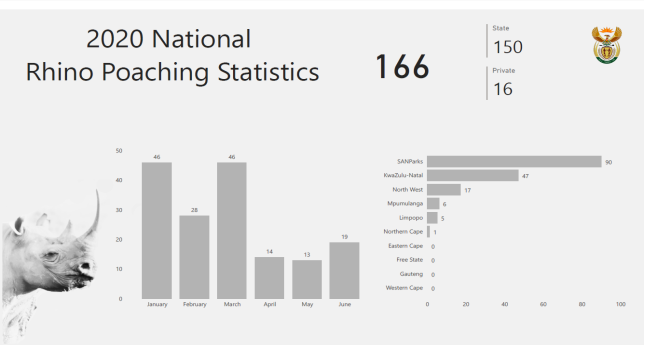