By NewsroomSeptember 3, 2021Conservation
No Comments 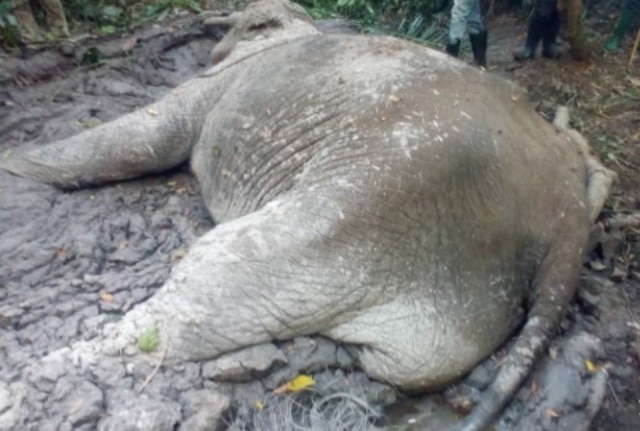 The carcass of the elephant at Bugoma Forest. According to UWA, the elephant could have died due to natural causes. Image: As originally published by Daily Monitor.

Environmentalists are mourning the death of a bush elephant that was found dead over the weekend in the Kaseeta area in Kikuube District.

The elephant is believed to have been living in Bugoma Forest reserve, one of Uganda’s natural forests.

According to the Association for the Conservation of Bugoma Forest (ACBF), a coalition of over 230 organisations that are involved in a campaign to save the forest from depletion, the elephant probably moved from the degraded land of the forest and it could have been searching for water and pasture at a new site.

“We suspect that its death is caused by the increased degradation of Bugoma Forest which has been its habitat,” said Mr Robert Akugizibwe, the General Secretary for ACBF, arguing that elephants do not easily forget where they have passed before.

“We believe that it left its habitat that is under depletion and went to another site probably in search for water and pasture and in the process, it got stuck in the mud and died,” Akugizibwe told Daily Monitor on Monday.

He said civil society organisations that are under the association have requested the Ministry of Tourism, Wildlife and Antiquities to turn the forest into a national park as a measure to curb the increased threats that are degrading it.

When contacted for a comment, Kikuube District senior Environment Officer, Ms Pauline Nambi, said her office had not yet heard about the incident.

“I do not have any information about the incident. Maybe you can contact George, the Uganda Wild life Authority officer in Charge of Kabwooya wildlife conservation area,” she said.

However, UWA Spokesperson Mr Bashir Hangi says they suspect the elephant could have died of natural causes.

“We got to know when the elephant had died over a week ago. It had started to decompose but a physical body examination showed that the body was intact” Hangi said, adding that wildlife experts did not find any injuries on the animal and its tusks were still there.

“We extracted them for safe custody and advised National Forestry Authority (NFA) to bury the carcass” he added.

He also noted that the country may witness many wildlife deaths and attacks to humans as long as people continue to destroy their habitats.

Under the Save Bugoma Forest campaign, some Civil Society Organizations (CSOs) are protesting the alleged plan to turn part of the forest into a sugar plantation.

Environmental CSOs and NFA were dissatisfied with the court ruling which they claim has handed over the forest for destruction.