By NewsroomAugust 22, 2019Uncategorized
No Comments

Five eastern black rhinos translocated from European zoos to Rwanda’s Akagera National Park have successfully completed an initial period of acclimatization and been moved into larger, 1-hectare (2.5-acre) enclosures. They will eventually be released into the wider park, joining a group brought over from South Africa in 2017, the first of these critically endangered species to roam in Rwanda since 2005.

Since the 1970s, rhino populations have been decimated by a poaching epidemic driven by demand for rhino horn, with a 96 percent decline in the number of black rhinos (Diceros bicornis) from 70,000 to just 2,410 between 1970 and 1995. The eastern black rhino (D. b. michaeli), originally ranging across East Africa, from southern Sudan to northern Tanzania, is the most endangered of the three black rhino subspecies. There are fewer than 1,000 wild individuals left in small isolated populations scattered across Tanzania and Kenya.

In a partnership between the government of Rwanda, the European Association of Zoos and Aquaria (EAZA) and African Parks, an international NGO, five rhinos from EAZA’s rhino-breeding program completed an arduous 6,000-kilometer (3,700-mile) journey from Europe to their new home in Akagera National Park in Rwanda. 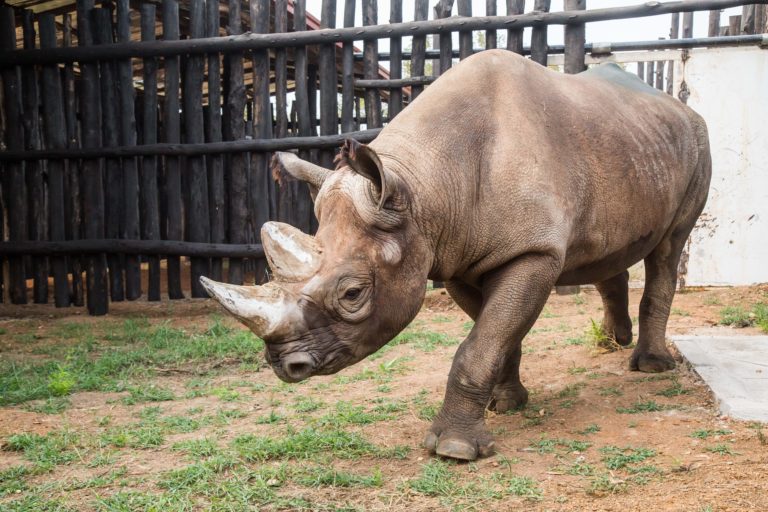 Original photo as published by Mongabay.com: The rhinos were initially confined in a release boma before being released into a wider enclosure to allow easy monitoring whilst they adapt to their new environment and diet. Photo: Scott Ramsay

This is the second attempt to establish a population of eastern black rhinos. Rhinos were brought into the park in the 1950s from neighboring Tanzania, growing to a population of more than 50 by the 1970s, before being wiped out by poaching. The last confirmed sighting was in 2007.

“They’ve settled in really well and they’re taking well to the local, native vegetation,” says Jes Gruner, Akagera’s park manager, of the European-bred rhinos. “We’ll soon be taking the first steps releasing them into a small enclosure around the boma.”

There is an ex situ population of around 90 eastern black rhinos in private reserves in South Africa, grown from nine individuals imported in the 1950s. Eighteen rhinos from this group in South Africa were translocated to Akagera in 2017.

EAZA is a membership organization of more than 400 zoos across Europe and the Middle East. One of the conditions of membership is that species that fall under EAZA’s European Endangered species Program (EEP) are managed in a coordinated breeding program across all institutions.

“We’ve got some very sophisticated software now that I can look at and see which rhinos need to move to ensure we are keeping the genetic population healthy,” he says. “It’s basically a big rhino dating game.”

However, an underlying assumption of the software is that the founding population were unrelated. EAZA are currently conducting research to find out exactly how genetically diverse their population is. Pilgrim says he believes that given the number of different places rhinos were imported from, it is highly likely that they have genes in the population that no longer exist in Africa — and that could be really important for the future of the eastern black rhino.

“The good news is that even with very inbred populations, it doesn’t take too many genetically distinct animals entering the population to make a big difference,” Pilgrim says.

There are challenges for zoo-bred rhinos embarking on a life in the wild. Their digestive systems need time to adapt to their new diet; tsetse flies need to be controlled around their boma until they have developed some resistance to trypanosomiasis; and they must learn how to interact with the other inhabitants of their new home — especially the rhino bulls already in residence.

“The [release] process will be done slowly and monitoring them the entire time,” Gruner says. “It could be a couple of years before they have access to the wider park.”

Relocating rhinos is an expensive business. Gruner estimates that the project has cost around $1.5 million over the last two years. Critics of ex situ conservation point out that the programs are often expensive, and the history of reintroductions has produced mixed results.

In the case of the eastern black rhino, though, the hope that ex situ conservation in zoos could provide a genetic “ark” from which to replenish wild populations appears to be bearing fruit. Pilgrim says he believes one of the important differences is the reason for the rhinos’ decline.

“The majority of species are completely at threat because of habitat destruction,” he says. “Until you can remove the reason they’ve become endangered in the first place, reintroduction makes little sense.”

By contrast, rhino numbers have been devastated by poaching, leaving large areas of suitable habitat devoid of rhinos, including the Serengeti-Mara ecosystem that once supported large numbers of black rhinos.

“If we can stop poaching and protect them, then there’s plenty of habitat to go back into,” Pilgrim says. “Being a herbivore and having very few natural predators as adults, if any, that gives [reintroduced rhinos] a great chance.”

Controlling poaching has been a major focus for African Parks since it assumed management of Akagera National Park in partnership with the Rwanda Development Board in 2010.

“Poaching will always be a concern everywhere,” Gruner says. “However, we have hugely reduced bush meat poaching in Akagera over the last decade and put measures in place to ensure the protection of the rhinos.”

The existing population of rhinos imported from South Africa have adapted well and are now starting to reproduce. With the vital injection of fresh genetics from the EAZA breeding program, the future looks bright for the rhinos of Akagera National Park.

CORRECTION: This story originally stated that the eastern black rhino was not originally native to Rwanda. In fact D. b. michaeli’s historic range did include Rwanda.