‘Every tool in the box’ to save Sumatran rhinos: Q&A with Nina Fascione of IRF 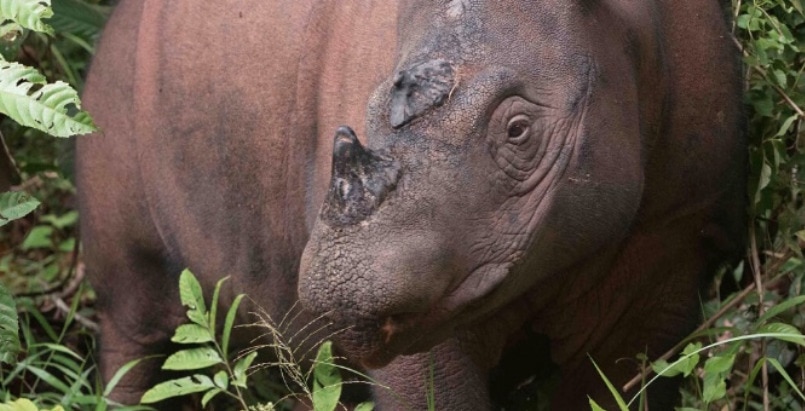 In March 2020, Nina Fascione was named the new executive director of the International Rhino Foundation (IRF). The IRF works to protect all five rhino species, but none is as imperiled at the Sumatran rhino, which numbers fewer than 80. (Original photo of a Sumatran Rhino as published by Mongabay.)

Nina Fascione has taken on a big job. As the new head of the International Rhino Foundation (IRF), she’s become a powerful player overnight in the protection of the world’s five rhino species. And no rhino is in more desperate straits than the Sumatran rhino (Dicerorhinus sumatrensis). Down to somewhere between 30 and 80 animals, the species only survives in a few, scattered, small populations on the Indonesian islands of Sumatra and Borneo.

Weirdly hairy and full of songs, the Sumatran rhino is the last survivor of the genus Dicerorhinus and believed to be the only living relative of the extinct woolly rhino (Coelodonta antiquitatis), which our ancestors painted on the walls of caves. Last year, the species went extinct in Malaysia. Today, there are only eight rhinos in captivity, and breeding them has proven incredibly difficult; only one surviving female and one male have proven fertile to date.

In 2018, conservationists announced a new initiative known as Sumatran Rhino Rescue, to attempt to capture more rhinos from the wild to add to the captive-breeding program, a step that was practically anathema a few years prior. Still, delays persist. The COVID-19 outbreak in Indonesia has put capture efforts on hold.

Fascione comes into her new post at a time when decisions will have to be made, hard ones, that will either lead to this species’ eventual extinction or its resurrection from near oblivion. But with her vast experience, beginning at Philadelphia Zoo and then moving to Defenders of Wildlife and Bat Conservation International, Fascione is ready to take on a new endeavor.

“I guess I love a challenge,” she says, vowing to use “every tool in the toolbox” to save this species.

Mongabay spoke to Nina just five weeks into her new role as executive director of the IRF, hoping to get a sense of her approach and priorities. The conversation appears below, lightly edited for clarity.

An interview with Nina Fascione

Mongabay: Will you tell us about your background?

Nina Fascione: I have worked in conservation my entire career. In fact, I’m one of the people that literally from the time I was about 4 years old never wanted to anything else except work with wildlife. I have started a career — I won’t share exactly how long — in conservation and I truly could not be more excited to be coming full circle to a lot of things with this incredible gig at the International Rhino Foundation (IRF).

Have you worked with rhinos in the past?

Just a little bit. Interestingly, I started my career at Philadelphia Zoo in the late ’80s. I’ve worked with a lot of careers: there I was a veterinary technician. And we didn’t have rhinos. So when I say come full circle in my career, zoos are such a part of rhino conservation that that’s been an exciting part of it too: frankly, I’m running into a lot of people that I’ve worked with decades ago in the zoo world.

What attracted you to the mission and the scope of the International Rhino Foundation when you were applying for the job?

Very much the critical conservation imperative for this taxonomic group. I’ve always loved the underdogs and the imperiled ones. I was working at Bat Conservation International (as executive director) when white-nose syndrome was really increasing. I guess I love a challenge. I worked on wolf restoration in the Rockies. Wolves are doing much better now. It’s just such a worthy and compelling conservation issue.

You’re dealing with every single rhino species on the planet and wide-ranging different countries. Where do you see the Sumatran rhino fitting into all the other programs, in terms of priority?

Yes, so we are working on all the rhino species, but compared to bats which make up a quarter of all mammal species [chuckles] there are only five rhino species, really. No, it’s a big mission to work on all five species. Especially because they’re in different geographic regions and there are different issues impacting them in the different regions.

With that said, Sumatran rhinos are right up there. Sumatran and Javan rhinos, obviously are the mostly critically imperiled. With the risk of them going extinct in our lifetimes. I don’t even know how to say it strong enough, but they are a huge priority for us.

Within the Sumatran rhino circle, there’s been a long-standing debate about the importance of capturing more rhinos from the wild. It’s been a debate that’s been going on since really the ’80s. Where do you see IRF currently in the midst of that debate? Are you in favor of more captures from the wild? Is that something that you, or the organization is actively working on?

Yes, so two comments on that, if I may. One is that, one of my conservation philosophies — and it’s a statement of IRF as well — this is personal: we will use every tool in the toolbox. These are critically imperiled animals. There are fewer than 80 Javan rhinos, there are [around] 70 Sumatran rhinos. With a species that’s that close to the brink of extinction, we have to work with all the partners we can. We have to use all the tools in the toolbox.

And I have to say, OK, granted only I’m only five weeks on the job, but I haven’t heard anybody say that capture should not be part of conservation methods going forth.

I think the debate has turned full circle now.

The alliance (Sumatran Rhino Rescue) is talking about it. IRF certainly is involved with our partners on the ground in Indonesia. Yes. In fact, we and our partners are actively working on it. Not only do we believe in it, we’re doing it.

There are currently around six rhinos being tracked in Way Kambas and Leuser for potential capture.

Another long-standing debate within the Sumatran rhino circles has been the use of assisted reproductive technology, or ART. Where do you see IRF in this context? Is this something that you’re in favor of? Or do you feel like the priority should be more natural breeding? Are you interested in looking at the technologies that are maybe a few years away, or maybe even a decade away, and playing a role?

Again, back to my refrain, all the tools in the toolbox. Artificial technology as reproductive technology will absolutely have a role to play.

Actually, I’ve been getting into all the technology conversations I’ve been having the past five weeks, in terms of ever-improving camera technology that uploads to the cloud instantaneously. There’s some cool technology out there, and all of it’s going to be essential.

Back to the reproductive technology: sure, that is absolutely one of several tools available to help Sumatran rhinos. I’m not sure yet how helpful it will be, I don’t know if anyone knows that. But with a species that’s so endangered, we won’t close any door on conservation techniques or tools or technologies.

I don’t know of any species that’s been saved using ART alone. Using it to try and bring back a species will be complex and difficult. I understand there’s been recent developments, and those are first steps on a long journey of using this. To date we put emphasis on natural breeding.

But even if we keep successfully breeding the animals we have naturally, they’ll soon be far too interrelated. We have a genetics risk happening, and I think everybody else is also in agreement on this. We need to get new animals in the mix. Could that be through ART? Possibly. We absolutely support the ongoing explorations of artificial reproductive technology. I just would say, I don’t want anyone including our funders to see this as a silver bullet that pulls funding away from other work.

So we definitely support ongoing examination of what role it can play, but I don’t want anybody to think that’s the only role, or that that’s what’s going to be the cure. We need everything. We need the monitoring, we need the protection. We need the natural breeding, we need the whole gamut.

Our partners are finding rhino signs in BBS. We are awaiting camera trap data and are exploring other technologies to verify the population in the park. Fingers crossed.

We’ll continue ongoing strategies, determining strategies and resources. We’ll determine what ongoing resources to place there, as some of this data is collected and analyzed.

There are talks of the possibility of expanding to eDNA surveys for another method.

For the DNA surveying, what would they be looking for? Where would they get the DNA? Would they look at fecal samples they think might be rhinos or would it be from insects?

No, I heard that you can possibly get some material out of wallows.

But I don’t know that anyone’s doing that yet. It’s something that in the past five weeks we’ve certainly talked about even at IRF. That’s something else we should be looking into.

So, it’s not actively going on, but it’s a possibility down the road?

We don’t have information on Pahu for you, as she’s being managed by others.

We haven’t had a birth at the Sumatran Rhino Sanctuary in several years. Obviously Ratu gave birth to Delilah over four years ago?

Where are the reproductive efforts at this point? Are they attempting to breed Ratu again? What is going on with Rosa and Bina, the two other females?

We’re clearly hoping for another baby as soon as possible, and working with our partners to try to make it happen. We can say Andalas and Ratu are being bred again now that Ratu’s maternity leave is over.

The Sumatran rhino is considered by many to be the world’s most endangered rhino, given that the population is so fragmented and perhaps the most endangered large mammal. How hopeful are you that we can actually turn this around and save this species?

I will say this, what I always used to say about polar bears. There’s a large caring community of people around the world that care about this species. Collectively, we are working to do everything we can to save this animal. I don’t know, I can’t tell you today whether it will be successful or not, but I can tell you without these efforts they certainly would go extinct.