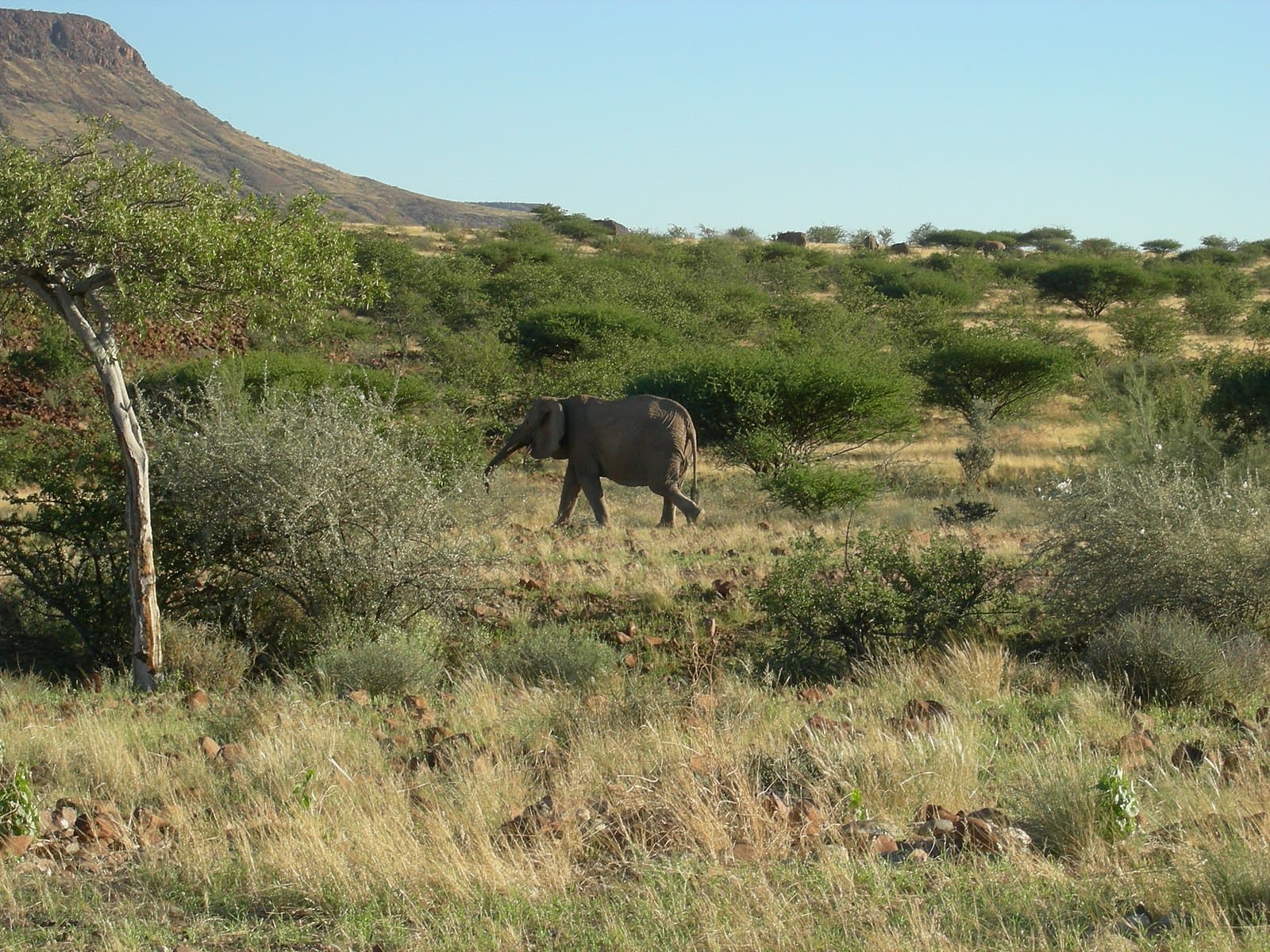 The export of 22 wild-caught elephants from Namibia to the United Arab Emirates in March has raised concerns over their welfare and stoked criticism of how Namibia manages its wildlife.

Fifty-seven elephants were sold at auction in 2021 to private buyers, and 37 have already been captured. Fifteen of those were moved to a private reserve in Namibia and will remain there. In early March, 22 were flown to two safari parks in the UAE.

Another 20 elephants are still to be captured. Their ultimate destination is not yet publicly known.

The Pro Elephant Network (PREN), a forum of individuals and organizations campaigning to stop the capture and exploitation of elephants, says those sent to the UAE were taken from a small, fragile population of Namibia’s desert-adapted elephants.

“We were informed that the 22 elephants did not make up the entire herd, a few elephants were left behind [in Namibia]. This has very serious implications for the welfare and well-being of both the captured elephants and the elephants left behind,” PREN coordinator Stefania Falcon told Mongabay.

“The Namibian government never provided the non-detriment finding, to prove that this capture has not had negative, non-reversible effects on this small population.” 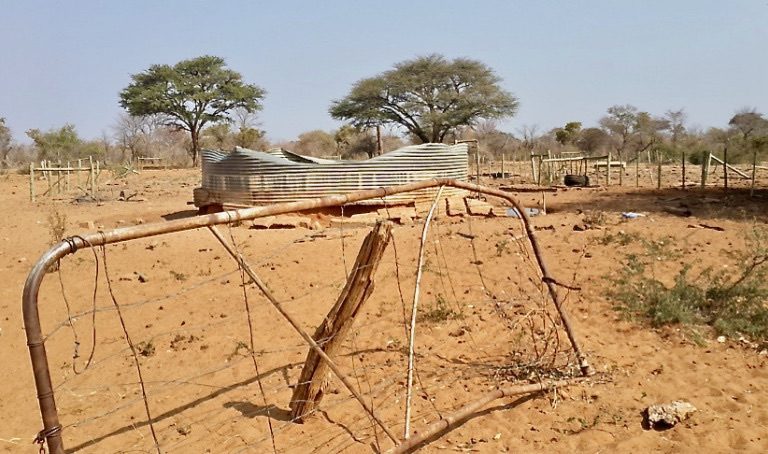 Namibia’s Ministry of Environment, Forestry and Tourism (MEFT) says animal welfare groups opposed to the auction of the elephants do not have to live with the damage inflicted by some herds, as local communities do. In a statement last month, the ministry said elephants killed four people and caused 923 cases of crop damage between 2019 and 2021.

MEFT spokesman Romeo Muyunda told Mongabay the animals are adapting to their new home. “We are informed that the elephants are drinking and eating very well,” he said.

He denied the animals sent to the UAE, which were captured in the Kamanjab commercial farming area of the Kunene region in northwestern Namibia, belonged to the fragile, desert-adapted population. “The 22 come from a healthy population of elephants, a population that has grown and continues to grow leading to increased conflicts with humans.”

The other 15 were captured in the Omatjete area, in the western Erongo region, and have been transported to the Naankuse Foundation’s 33,000-hectare (81,500-acre) reserve in central Namibia.

One of the recipients of the elephants in the UAE, Al Ain Zoo, is a member of the European Association of Zoos and Aquaria (Al Ain Zoo). The other destination has been named by activists as Sharjah Safari Park.

EAZA expressed concern over the deal’s “extreme lack of transparency” and said Al Ain Zoo could face unspecified sanctions. At the time of publication, Mongabay had not received a response to questions emailed to Al Ain Zoo.

A report by the official Emirates News Agency last September said work was nearly complete on the zoo’s Elephant Safari Project, which would offer visitors “a glimpse into the amazing African wildlife with all its natural elements.”

Chris Brown, chief executive of the Namibian Chamber of Environment, an umbrella association of conservation NGOs, said the areas within the two UAE safari parks where the animals are being kept measure 28 hectares (69 acres) and 24 hectares (59 acres) respectively.

“They’re in fairly large areas, not in enclosed cages,” he said.File photo of desert elephants: Campaigners fear the elephant capture in northwestern 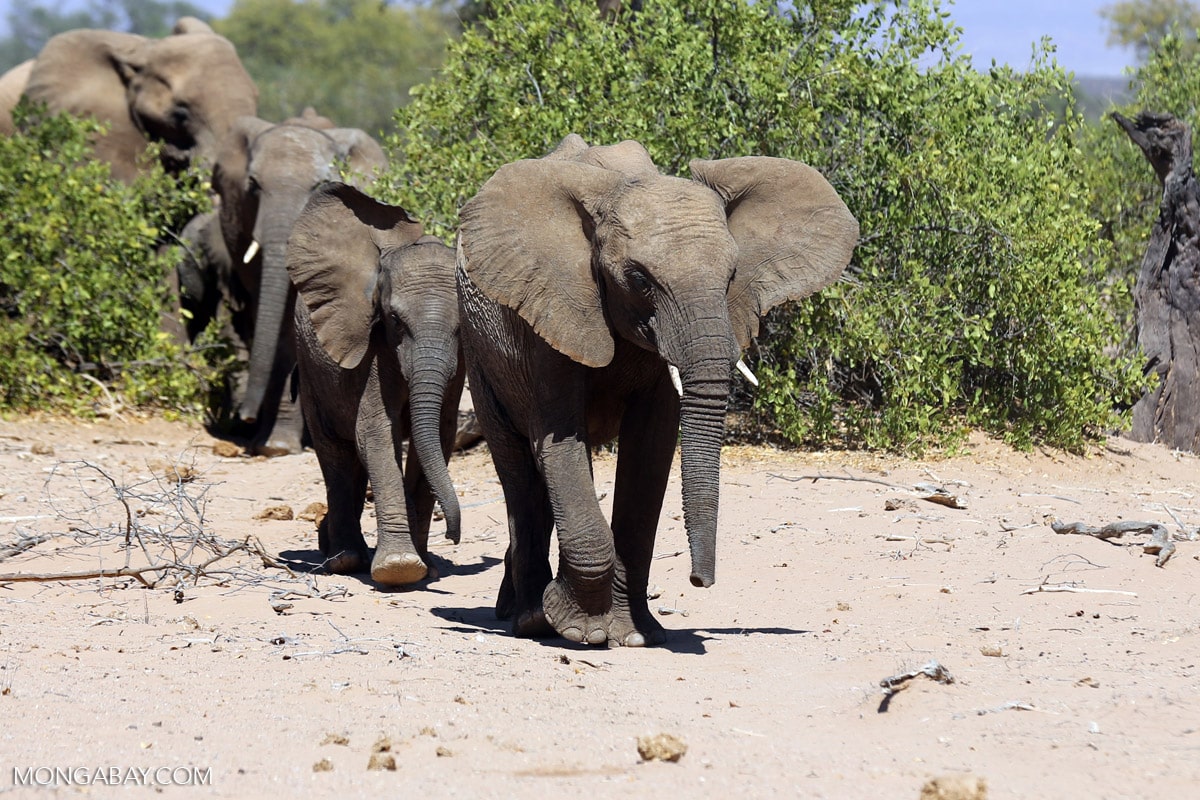 File photo of desert elephants: Campaigners fear the elephant capture in northwestern Namibia threatens the viability of a sparse local population there. Image by Rhett Butler for Mongabay.

The NCE’s Brown said Namibia is dealing with the success of conservation policies that are sustaining growing populations of wildlife on private and communal land. This includes elephants, which sometimes raid crops, and damage fencing, pipes and water infrastructure. The Namibian authorities say this can provoke retaliation against elephants.

Conservation groups estimate that Namibia’s elephant population is now at 24,000, up from around 7,000 in 1990. Around 31% live outside national parks.

Brown told Mongabay that careful thought was given as to which areas the elephants were captured from. “These hot-spot areas were selected to reduce pressure [from elephants] on the people on the ground.”

But some commentators have accused the Namibian government of exaggerating the human-wildlife conflict in Kunene to justify the capture and sale of elephants.

Writing on the African Elephant Coalition website, Keith Lindsay, Adam Cruise and Rosie Awori, argue that the Kunene region is sparsely populated by either people or elephants, making incidents of human-elephant conflict there far less common than in other parts of Namibia. They raise concerns that elephants in this region are already under stress due to a long-standing drought.

They also note that it’s unclear what share of the money raised by the auction will be retained by the MEFT for the Game Products Trust Fund.

“The whole approach, which primarily benefited a single rich landowner, belies the statements from the government that sale of wildlife leads directly to economic upliftment of rural communities,” they write.

Falcon, the PREN coordinator, alleged the government had received only a fraction of the total sum paid for the elephants. She accused it of refusing to provide supporting information and evidence for its actions.

So where’s CITES?Critics say Namibia’s interpretation of CITES rules has allowed the country, or rather the game rancher who exported the elephants to the UAE, to circumvent restrictions on the export of elephants outside Africa that was agreed to by CITES in 2019.
Last September, the CITES secretariat said the export was in line with regulation of trade of listed species, but there was no consensus on that among members of its standing committee that met in Lyon, France, last month.
Pro Elephant Network coordinator Stefania Falcon said one of the network’s partner organizations, the EMS Foundation, had sought advice from a South African environmental law firm over the legality of the exports. A separate legal opinion was obtained by delegates from Burkina Faso attending the meeting in Lyon.
“Both opinions indicated that the capture of wild elephants in Namibia and the export of these elephants to a non-range state was not legal,” Falcon said.There will be further discussion of the issue when CITES, meets in Panama in November, but concerns have been raised that the remaining 20 auctioned elephants could be captured and exported before then.