By NewsroomMarch 8, 2021Anti-poaching
No Comments 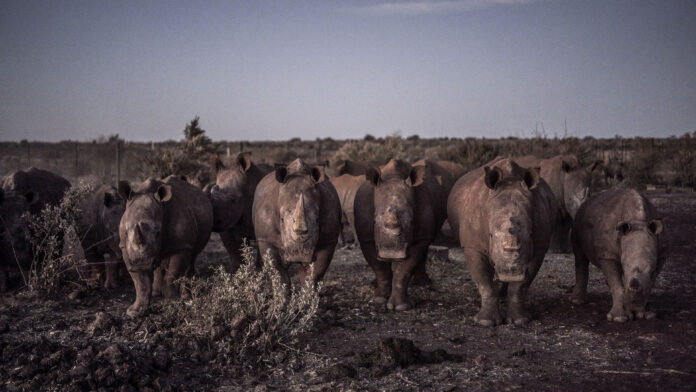 Rockwood Conservation in the Northern Cape run a breeding programme with genetic diversity in mind. Image: As originally published by M&G.

Wicus Diedericks, the founder of Rockwood Conservation, a 3 000-hectare private rhino reserve in the Northern Cape, says despite a year-on-year decrease in poaching, it is just a matter of time before all wild rhinos are lost in Africa.

“It is a desperate time for desperate measures. It is very important for people to know how difficult it is to protect rhinos in the wild from poachers,” Diedericks says.

Diedericks says he is proud that Rockwood Conservation has “more than 300 Southern white rhinos in our care, more than 130 new births and zero poaching incidents in almost six years.”

But between 2008 and 2020, South Africa lost around 8 000 of its white rhino population. The Southern white rhino was declared extinct in 2011, but due to breeding programmes and rigorous conservation efforts by places such as Rockwood more than 18 000 can now be found around private reserves and protected areas in South Africa.

Diedericks says several mechanisms have been instrumental in maintaining 0% poaching in his seven-year conservation initiative.

“Because of the level of poaching in South Africa and the extremes that syndicates will go to to get rhino horn, many private rhino owners just cannot afford to lose their animals and so have put extreme measures in place to protect them. At Rockwood, we’ve developed a system that allows us to protect our rhinos around the clock while still giving them the freedom to live naturally,” he explains.

They use state-of-the-art surveillance systems, including thermal cameras and 20 military-trained mounted rangers who monitor the rhinos 24 hours a day.

“In the evening, the rhinos find their way back to enclosed bomas where they are fed and observed overnight. In the morning, they are released to roam and interact freely in the veld. With Rockwood now having one of the highest average annual population growth rates for white rhino in Africa, this approach is proving to be highly successful. However, this is also costly as every expense is self-funded,” he added.

A genetic reservoir being created by Rockwood and the Hemmersbach rhino force project is attempting to achieve high genetic diversity within their rhino herd. They will focus on obtaining and studying each of the rhino’s DNA profiles to carefully select males and females to breed and prevent genetic inbreeding.

According to South African National Parks, killing and poaching of rhinos in South Africa declined by 33% during 2020. Much of this is ascribed to global lockdowns.

In February, the minister of the department of environment, forestry and fisheries, Barbara Creecy, said after ten years of implementing various strategies to combat rhino poaching, South Africa had managed to arrest the escalation.

Last year 394 rhinos were killed in South Africa, compared with 594 rhinos the year before. This decline is significant, but it remains to be seen how the potential gradual lifting of Covid-19 restrictions will affect poaching levels in 2021.