By NewsroomAugust 30, 2019Uncategorized
No Comments

Wildlife officials from Delhi, India spent the last week at the Zoological Survey of India’s headquarters in Calcutta filming animal parts such as bear gall bladder and pangolin scales to train agencies involved in fighting illegal trade in such objects.

The Wildlife Crime Control Bureau is preparing short films on 20 animals whose parts are in demand in illegal wildlife trade. Specimens for shooting were provided by the ZSI, the country’s oldest taxonomic research organisation, set up in 1916. Officials said the short films were being made to train a number of enforcement agencies, including the Border Security Force and the directorate of revenue intelligence, involved in combating smuggling of animal parts.

“Several agencies (not involved in wildlife-related activities) seize animal parts. Often, it is tough for them to tell a fake item from a real one. These short films will train them in identifying animal parts,” said Tilotama Varma, the additional director of the Wildlife Crime Control Bureau.

“The exercise is important because the enforcement agencies are non-wildlife. They already have plenty to do.” 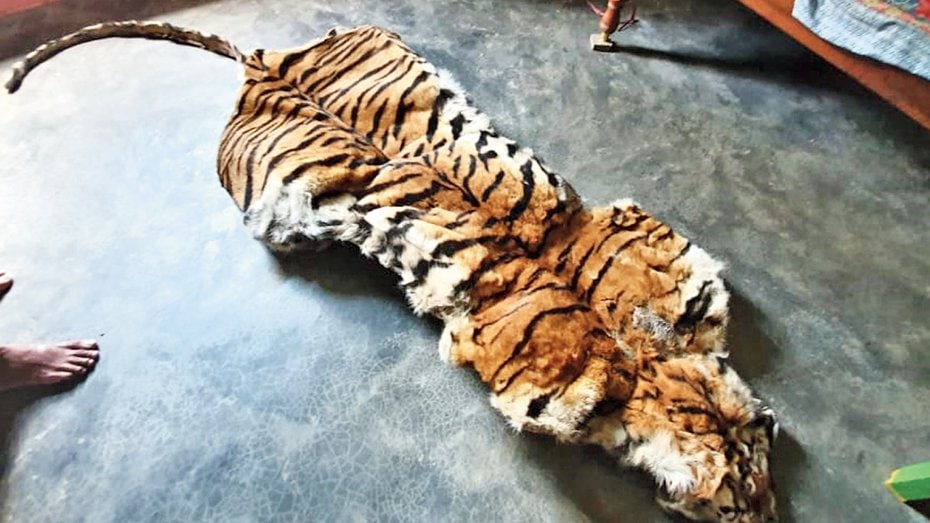 Original photo as published by The Telegraph: The picture of a tiger skin that the Wildlife Crime Control Bureau recently received. The informant had said the skin was in a house near Manas National Park in Assam. (Picture sourced by correspondent.)

“We have provided the physical specimens from our archives,” said C. Raghunathan, the joint director of ZSI.

The films will have images of the parts and a narration on how to tell a fake part from a real one. Some of the signs of a real tiger skin, for example, are the white colour of the upper lip near the nasal openings and the presence of white hair on the front inner surface of the ear lobe, an official said.

Wildlife trafficking — the Indian Wildlife (Protection) Act, 1972, bans trade in wildlife parts — has emerged as a multi-billion dollar trade. Southeast Asia is the largest market for wildlife products from India. Many wildlife parts were seized from Calcutta and neighbouring districts in recent past. Elephant tusks and pangolin scales were among the parts seized.

The directorate of revenue intelligence, which functions under the customs department, has made several of the seizures. Those arrested were mostly middlemen.

“The consignments change multiple hands before reaching their final destinations,” an official said.

Poaching of bear and illegal trade in bear parts — driven largely by the demand for bile, which is used in traditional Chinese medicines and folk remedies — continue unabated across Southeast Asia.

Tigers and pangolins are also endangered. While almost every part of a tiger is used in making medicines, pangolins are killed mainly for their scales. The skin of big cats is also fashionable among the high-flyers of Dubai and other Gulf countries.

India’s varied physical and climatic conditions make its range of fauna diverse. The country is home to over 91,000 species, a little less than 10 per cent of the world. The ZSI, which has regional units across the country, is responsible for surveying the faunal resources of the country.

“It is yet to be decided how the agencies will access the films,” an official in the bureau said. Some officials think there is an element of risk in putting the films in public domain because they can be accessed by wildlife traders.