First ever CT scan performed on rhino in SA

By NewsroomOctober 22, 2021Rescue and rehab, Science and technology
No Comments 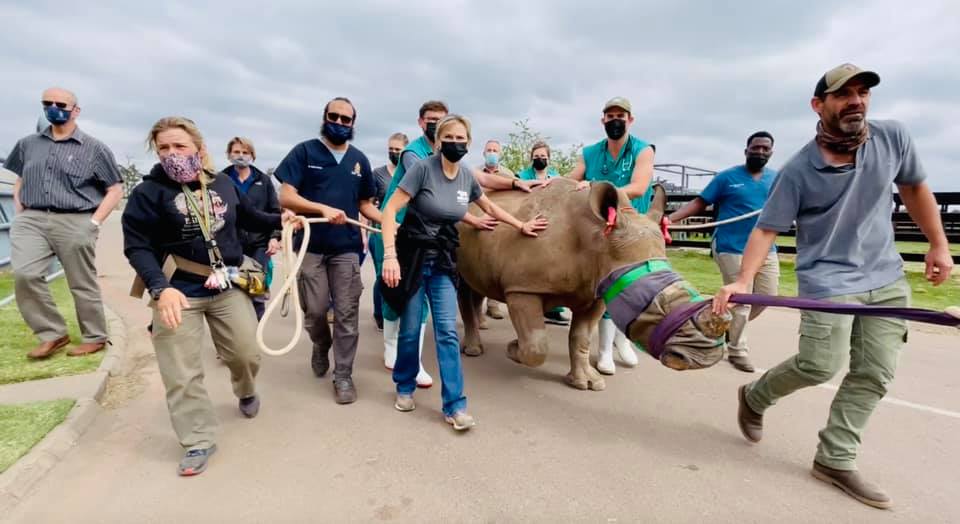 The team behind the CT scan. Image: Care for Wild.

South African vets have completed their first CT scan on a rhino.

The Care for Wild Rhino Sanctuary and the University of Pretoria’s Faculty of Veterinary Science in Onderstepoort completed the first ever successful CT scan on a live rhino in South Africa.

The scan was performed on a rhino named Oz, who is in the care of a local sanctuary, after the animal developed swelling on his face caused by a tooth root abscess.

Oz is a white rhino, who was orphaned in 2015 due to poaching. Oz was rescued and taken to Care for Wild for rehabilitation, release and ongoing protection.

“After discussions with wildlife veterinarian Dr Jacques O’Dell and Professor Gerhard Steenkamp, veterinary dentistry specialist and maxillofacial surgeon at the Faculty of Veterinary Science, and with the support of Louis van Wyk of Wildlifevets.com, the decision was made to transport the one-ton bull to the Onderstepoort Veterinary Academic Hospital for further investigation,” said Nieuwoudt.

The CT scan revealed a tooth root abscess and appropriate treatment was performed. Oz is back at Care for Wild with his rhino crash, and eating and drinking well, said Nieuwoudt.

The logistical experience, information and knowledge gained from this was phenomenal progress in the fight to save a keystone species from extinction, added Nieuwoudt.

“We cannot save a species alone, but together we can achieve remarkable things. In acknowledgement of the team of specialists who came together, we thank them for their passion, dedication and immense commitment,” she said.