By NewsroomNovember 23, 2021Wildlife Crime
No Comments 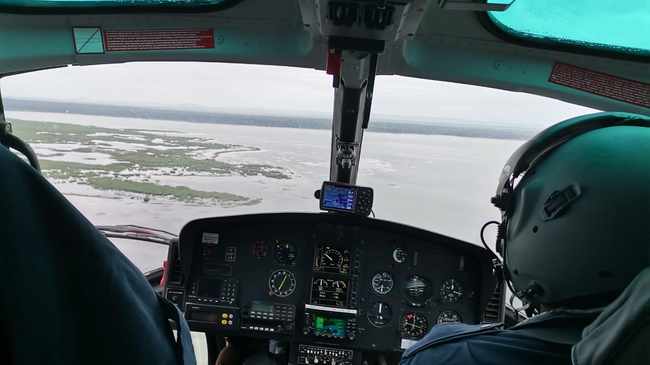 Police searching for the alleged poacher. Image: As originally published by IOL.

Police have not yet recovered the body of a suspected poacher believed to have been wounded in a shootout between poachers and iSimangaliso Wetland Park rangers more than a week ago.

On Saturday, police said Empangeni search-and rescue divers and K9 search-and-rescue officers returned to Lake St Lucia for a follow-up search, with the assistance of the SAPS Airwing, Durban.

The officers were searching for the person apparently wounded in a shootout between the suspects and iSimangaliso Wetland Park rangers.

“The officers spent five consecutive days searching on both water and land, but with no success. The search was suspended on Wednesday and a request was sent to the SAPS Airwing, Durban, for assistance. The scene and surrounding areas were searched but the injured person was not found,” the police said.

“The field rangers called for backup. A helicopter with four additional field rangers was immediately dispatched. As the helicopter flew over the area, two boats were spotted on the banks of the lake. A decision was taken to monitor the area near the boats, as it was suspected that the ‘poachers’ who had left the boats would return to them. The four rangers disembarked from the helicopter and began patrolling the area on foot,” said Musa Mntambo, Ezemvelo KZN Wildlife spokesperson.

He said as they were patrolling, four suspected poachers were observed walking towards the boats. One was carrying a gun. As the four suspects were about to push the boats back into the water, from a safe distance one field ranger cautioned them to surrender.

“But one of them started shooting towards where the rangers had positioned themselves. The rangers returned fire. When the shooting ceased, the rangers moved towards the boats from where the armed suspects had fired shots at them.

“The suspects ran in different directions during the shootout. The rangers saw blood in the water which made them realise that one of the suspects, probably the one with the gun, had been shot. He might have attempted to avert arrest by jumping into the water,” Mntambo said.