By NewsroomJanuary 7, 2020Conservation, Translocation
No Comments

The arrival of the rhinos marks the second translocation to Rwanda after South Africa donated 17 rhinos in 2017, reintroducing the species after it had disappeared for over a decade due to intense poaching.

That initial population has now grown to 20 in the park, which is considered an excellent habitat for the rhinos.

“This unique achievement represents the culmination of an unprecedented international effort to improve the survival prospects of a critically endangered rhino subspecies in the wild,” said Jes Gruner, manager of Akagera National Park. 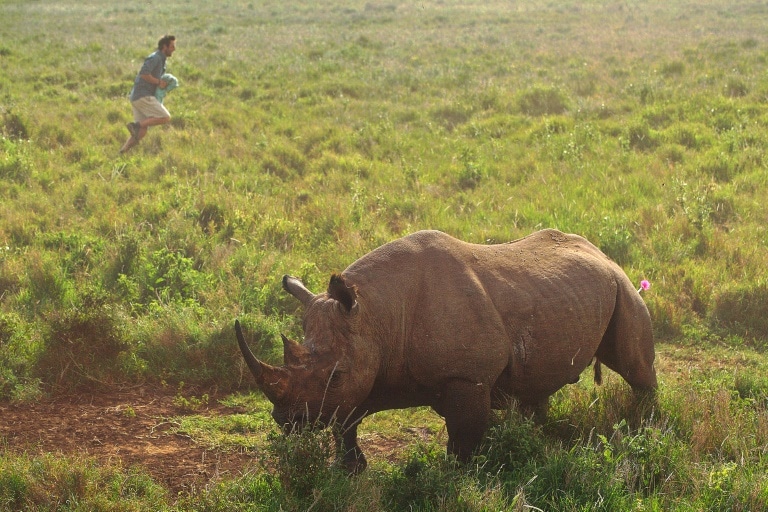 Original photo as published by The Lowvelder: There are about 5,000 black rhinos remaining across their range in the wild, according to the International Union for Conservation of Nature, making them one of the most critically endangered species in the world. (© AFP | TONY KARUMBA)

“Their arrival also marks an important step in Akagera’s ongoing revitalization and one that underscores the country’s commitment to conservation.”

The rhinos began their journey on Sunday after months of preparation at Safari Park Dvůr Králové in the Czech Republic, according to the Rwanda Development Board.

The two male and three female rhinos — needed to widen the gene pool in the park — will live in enclosed spaces with the aim of increasing their adaptability and survival rate.

There are about 5,000 black rhinos remaining across their range in the wild, according to the International Union for Conservation of Nature, making them one of the most critically endangered species in the world.

Rwanda also reintroduced lions — from South Africa in 2015 — after they had disappeared from the country for about 15 years.

“Just under a decade of management with improved law enforcement and strong community and economic development initiatives has seen poaching practically eliminated, key species including lion and rhino returned, significant support fostered for conservation, and vibrant tourism leading to Akagera being 80 percent self-financing,” read a statement from African Parks which assisted the translocation.