By NewsroomSeptember 24, 2019Conservation, Uncategorized
No Comments

When her small plane touched down on the tarmac near Desert Rhino Camp in Namibia last May, Behati Prinsloo was greeted with a welcome song, sung to her by the camp’s employees. That kind of hospitality, she says, continued throughout her stay. Often gathered around a bonfire in the middle of the desert, Prinsloo, her travel partners—which included a photographer and a videographer—and the staff of Desert Rhino Camp would share stories and take in the majesty of the free-roaming rhinoceroses around them.

Prinsloo was raised in the Namibian town of Grootfontein, about a six-hour drive from Desert Rhino Camp. But the model and environmental activist’s 10-day trip to Namibia last spring was more than just a homecoming—it was the first step on a mission of animal conservation. She traveled from her current home in Los Angeles to Africa with Save the Rhino Trust (SRT) Namibia, kicking off a partnership with the nonprofit organization.

“It is so important for anyone who has a platform to take a stand,” says the 31-year-old Victoria’s Secret model and wife of Maroon 5 frontman Adam Levine. “We don’t have time to waste when it comes to the environment.”

As the mother of two young daughters, ages 1 and 3, Prinsloo often thinks about how future generations will experience Africa and its animals, hoping that others—including her daughters—will be able to interact with them the way she did. Grootfontein is about an hour from Etosha National Park, known for a wealth of wildlife. Her father, she says, is very adventurous, and family vacations were often safaris in places like Botswana and South Africa. 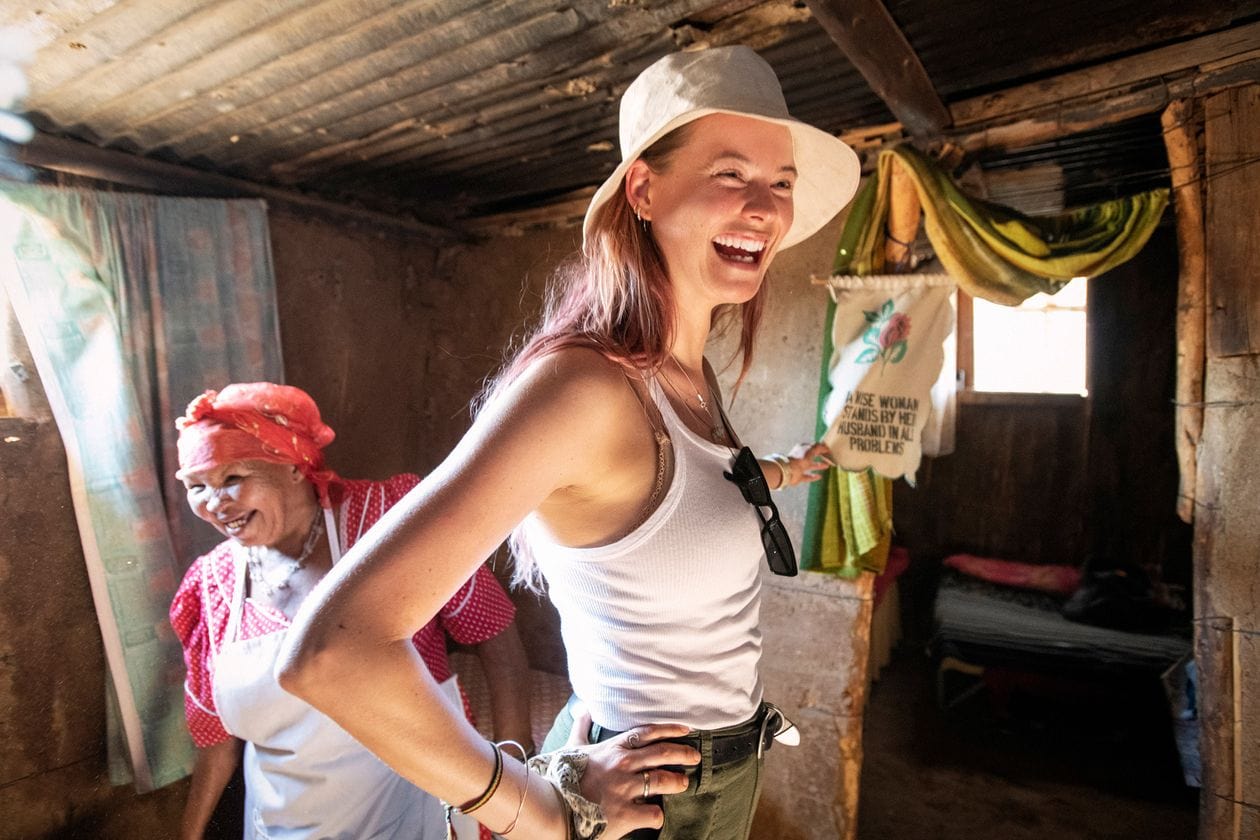 Original photo by Hugh Lippe as published by Barron’s.

“When you grow up there, you’re part of nature, and you appreciate it in a different way,” she says. “You know that if you lose any of those animals, Africa loses a part of its soul.”

Prinsloo, who moved to London at age 15, hadn’t been back to Namibia since 2012, due in part to the births of her children. “Now was the right time in my life because I just had my two kids, and I really felt the need to live by example for them,” she said over tea at a Midtown Manhattan hotel a few weeks after her trip.

While she visited several areas of Namibia on her journey, the heart of the trip was in the northwest at Desert Rhino Camp, a joint venture between travel group Wilderness Safaris, SRT, and local conservancies. It’s also open to the public, and all visitors can get an education in SRT’s work. The camp is home to the last free-roaming black rhino population in the world. SRT “trackers” monitor the land as well as the health of the rhinos, working to ensure they don’t get poached. It’s a job they’ve been doing there since 1982.

Ginger Mauney, a conservationist, SRT board member, and longtime resident of Namibia, who planned the trip for Prinsloo, says there are a couple of reasons rhinos are valued by poachers. One has to do with the belief—largely in China and Vietnam—that rhino horns have medicinal qualities, curing everything from headaches to cancer. “That’s been proven not to be true,” Mauney says. In addition, some illegal horn traders participate in what’s called “gambling on extinction,” meaning they keep pieces of endangered animals in case that breed becomes extinct, and as a result, the pieces rise in value.

Today there are fewer than 5,000 black rhinos left in the wild, and with epidemic poaching across Africa, “the critically endangered black rhinos’ last stand may be in northwestern Namibia,” SRT says. But there is some promising news, too: “This past year has been a very good year,” Mauney adds. At Desert Rhino Camp alone, “we’ve had 22 births, and we’ve gone nearly two years without a poaching.”

Much of that success at Desert Rhino Camp can be traced back to the trackers, each of whom spends 21 days a month tracking, covering 28 miles a day. Prinsloo says following them around was one of the most eye-opening experiences of her trip.

But her entire experience at the camp was magical, she says, from the moment her plane—which traveled from the capital city of Windhoek to Desert Rhino Camp—landed on the dirt tarmac. The plane had to wait to land until animals had left. “It was all very National Geographic,” she says.

The terrain that Prinsloo, Mauney, and the trackers crossed was rocky and rugged (“It looks like Mars,” Prinsloo says) and incredibly hot. Namibia has also been experiencing seven years of drought, Mauney says, with this year being particularly trying. In fact, water is so scarce at Desert Rhino Camp that when taking a shower, guests are asked to keep a bucket beside them to catch the cold water that runs before it turns warm, so it can be reused. The eco-friendly camp forbids plastic; glass bottles are used for drinking water.

Prinsloo and her guests stayed in accommodations she described as “glamping.” The tents each have an en-suite bathroom with a shower and a toilet, as well as “a comfortable bed, lovely linens, and a porch out front,” Mauney says. It’s enchanting, but also very basic. “There’s no spa,” Prinsloo jokes. “Here, it’s about the rhinos, and they really educate you on that.”

There’s a near-100% chance of seeing rhinos at the camp, and Prinsloo also spotted hyenas and oryxes. “I was overwhelmed by it all,” says Prinsloo, referring both to the majesty of the animals and the urgency of the work needed to keep them thriving. “So many times I just wanted to cry my eyes out.”

Now, she wants to transfer her knowledge of SRT’s work to her fans, posting about the cause on her social-media platforms, appearing on talk shows to discuss the mission, and educating young people in countries that lead the market for rhino horns. “Many people are doing life-saving things for the environment, and they don’t have the platform or the means to get their message out there.”

Prinsloo also appreciates how crucial a healthy wildlife population is to the country’s economic well-being, by way of its tourism. Getting to travel to her homeland through her conservation efforts is icing on the cake. “Africa,” she says, “is so ancient, and has so many stories, you feel it when you stand on the ground there. You feel connected and part of the circle of life.”