By NewsroomOctober 10, 2019Conservation, Rescue and rehab
No Comments

When the flood waters began to rise in India’s Kaziranga National Park in July, five greater one-horned rhino calves found themselves separated from their mothers and stranded in deep water.

Wildlife rescuers usually try to reunite calves with their mothers. But during the peak of the floods, with most of the park submerged under water and with hundreds of animals needing rescue, they often fail.

“Looking for a mother during floods is near to impossible,” says Rathin Barman, joint director of the Wildlife Trust of India (WTI).

The five lost calves were brought to a rescue center run by the WTI, the Assam Forest Department and the International Fund for Animal Welfare. They will stay in the center until they are two-and-a-half years old, according to Barman, who also heads the center. They will be hand-reared by a team of carers on human infant formula. It will be years before they’re re-released into the wild — if at all. 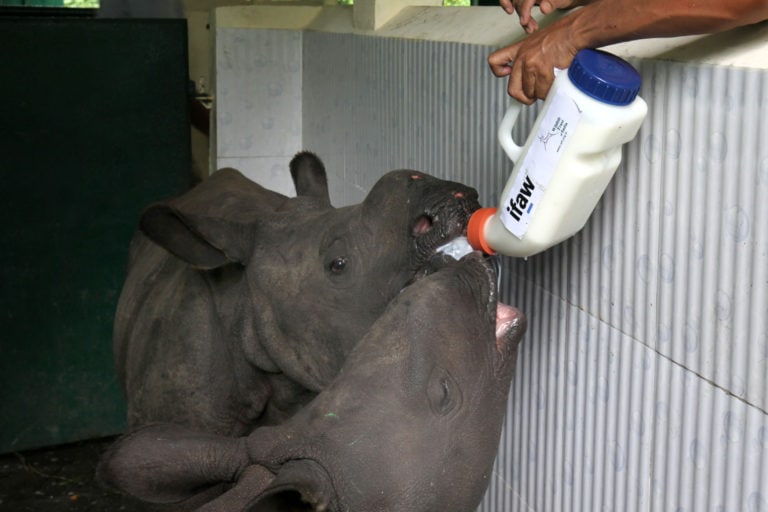 Original photo as published by Mongabay: Two of the baby rhinos rescued in the 2019 floods in Kaziranga National Park. Image courtesy Wildlife Trust of India.

Kaziranga is famous for having the world’s largest population of greater one-horned rhinos (Rhinoceros unicornis), with more than 2,400 individuals out of the estimated 3,500 globally. It’s also known for its annual floods during the monsoon season.

The park usually has multiple cycles of flooding between June and October, as rainwaters swell the Brahmaputra River, causing it to spill over. But this natural phenomenon is becoming a lot worse, in part because of unnatural factors around the park.

In recent decades, the floodwaters have reached record levels, resulting in the deaths of hundreds of animals. The highest recorded flood in Kaziranga was in 1998, and the park has started regularly seeing major inundations.

“This year was again a big flood,” Barman says. “Last year we didn’t have floods, but in ’16-’17 we had big floods, so almost three years consecutively we’re getting big floods in Kaziranga.”

In 2017, around 400 animals died, including more than 30 rhinos. By comparison, only seven rhinos were killed by poachers between 2017 and 2018, according to Kaziranga National Park records.

This year, around 200 animals have died during floods so far, including more than a dozen rhinos, according to park officials. They attribute this year’s relatively low death toll to improved management methods in the area. But it’s hard to say if the numbers will continue to improve.

Communities report the floods are gradually getting worse — and harder to predict.

“This time, 80 to 90 percent of the park was inundated,” says Rohini Ballab Saikia, divisional forest officer of Kaziranga National Park. “And this was the third-highest flood we ever had in Kaziranga, as per our records. During this period, the peak flood season was for about seven to 10 days.”

Though the waters have mostly receded, some areas in and around the park were still flooded when Mongabay visited in September.

Historically, animals facing floods in the park could easily flee to the higher ground of the nearby Karbi Anglong hills. Now, their passage is blocked by a highway and a growing number of hotels and resorts.

It’s a dangerous route to safety. Thousands of vehicles use the highway every day. And while park authorities limit vehicle speeds in areas where animals cross, especially during the floods, many animals are still hit by vehicles. This year more than a dozen animals, including hog deer and sambar deer, reportedly died along the highway during the floods.

It’s not just the highway making it difficult for animals to reach higher ground. The tourism industry is increasingly blocking animals’ paths along both sides of the national highway. Resorts are building walls around their premises, some of which encroach upon known animal corridors. Even though greater one-horned rhinos are fairly strong swimmers, the floods are often too severe for them to survive.

The resorts don’t just block animals when waters rise. Residents say construction has increased sedimentation in the river. A report from UNESCO also found that embankments around the Brahmaputra River were making the situation in Assam worse.

“The deforestation and flood control methods, such as the construction of embankments, have also altered the riverine ecosystem,” the study found. “This has resulted in the river becoming heavily silted. In Upper Assam the river bed has been raised to such an extent that only a few days of rain can result in major floods.”

Residents like Manoj Gogoi, a wildlife rescuer, have also observed flooding on the other side of the highway near the Karbi Anglong hills. “If it rains heavily in Karbi Anglong, it floods on that side of the road, which was not previously seen,” he adds in Assamese.

According to Gogoi, there hasn’t been proper planning for drainage in the area, and water is being blocked. “Unless we clear the animal corridor, we are in deep trouble,” he says.

As construction along the outside of the park continues, park officials are looking inside the park for solutions to protect animals. In the last few years, they’ve built dozens of artificial highlands within the park to give animals somewhere to go when the water rises. But these artificial highlands have been very controversial.

Environmentalists say the priority should be maintaining safe passage to natural highlands, rather than constructing artificial ones in the park. Experts have also raised concerns that highland construction in the park could add to the problem of siltation in the river.

Environmentalists also point out that animals can’t survive for long on the man-made highlands, especially since there is no food supply on the elevated mounds of earth. “No matter how many man-made highlands they make, it cannot be as useful as the natural highlands,” Gogoi says.

Still, Gogoi attributes the comparatively few animal deaths during the floods this year to the recent installation of another 33 artificial highlands. Viral photos showed dozens of rhinos taking shelter on the highlands during the July floods.

Saikia, Kaziranga’s divisional forest officer, agrees the highlands played an instrumental role in saving rhinos and other animals this year.

According to Saikia, the artificial highlands were constructed after a team of experts evaluated the landscape. Gaps were left in between to avoid blocking water, and each highland was constructed with careful attention to the direction the water flows.

For Saikia, the conditions outside the Kaziranga National Park are reason enough to build the artificial highlands inside.

“If, suppose, we had given safe passage to the animals to move towards the Karbi Anglong hills without human intervention, then we wouldn’t need to intervene so much inside the park,” he says.

The forest department says it’s working with the police, local communities, tourism agencies and NGOs to prepare for the flooding every year. But the relationship between local communities and the park hasn’t always been good.

For decades, Kaziranga National Park has expanded, and in the process hundreds of villagers have been displaced. Since 1984, there have been six additions to the national park.

“Our grandparents would talk about how they were living inside Kaziranga — the present boundary of Kaziranga — and they talk about how they were herded off from there,” says Pranab Doley, an indigenous activist from Kaziranga. “Like, a sahib came with a horse and they said, ‘You have to go out because we have to protect the rhinos,’ and it’s historically documented that the hunting of rhinos was not a regular practice of the communities here.”

Even now, there is talk of expanding the park to cover the animal corridors that lead to the Karbi Anglong hills. There are concerns that this potential expansion could displace more communities.

Construction around the park has also made the flooding worse for nearby communities.

“The more elevated we make our houses, the more flooding is taking place day by day,” says Kulendra Deka, a farmer from Difolupothar Rongalu village, in Assamese.

Doley says he feels communities should be part of the decision-making process for development around the park. He says communities have historical knowledge of how to deal with the floods, but that the government won’t listen.

“Every year we have to shout, scream, suffer this trauma of losing again and again,” he says. “It’s a constant process of only losing. So we’ve become only relief seekers. One month, to three months in a year we’ll go to relief camps and we’ll be herded like cattle. And there we have to wait for someone to give us rice, dal, or some torn clothes — like charity. This is not what people want.”

Still, some community members say their relationship with the government, especially the forest department has gotten better.

“Earlier there was a gap between the local community and the department,” says Gogoi, the wildlife rescuer. “And slowly the gap is reducing. I don’t blame the forest department, everyone is to be blamed.”

Gogoi’s animal rescue efforts means he works regularly with government bodies involved in the conservation of Kaziranga National Park. Both he and the forest department are involved in efforts to educate communities about animal rescues and floods. These days, many of the alerts about stranded animals come directly from communities themselves. More villagers know to call the forest department if they see a deer or rhino in trouble.

With the rapid development outside the park boundaries, rescue efforts are intensifying, and it’s difficult to know how bad it’s going to be from one year to the next.

For the five rhino calves rescued this year, it could take around four years before they’re released. First they’ll be hand-reared for a few years, then they’ll be sent to a pre-release enclosure for a year or two, where they’ll adapt to reduced human contact and finding their own food and water. Some may even be sent to the Assam State Zoo as part of the zoo’s rhino-breeding program.

In the meantime, Kaziranga is still recovering from this year’s floods.

“Because it’s an annually flooded park, all our infrastructures are every year damaged,” Saikia says. “So we need to rebuild everything.”