For male chimps looking to mate, an entourage is the way to go, study finds

By NewsroomSeptember 6, 2021Science and technology
No Comments 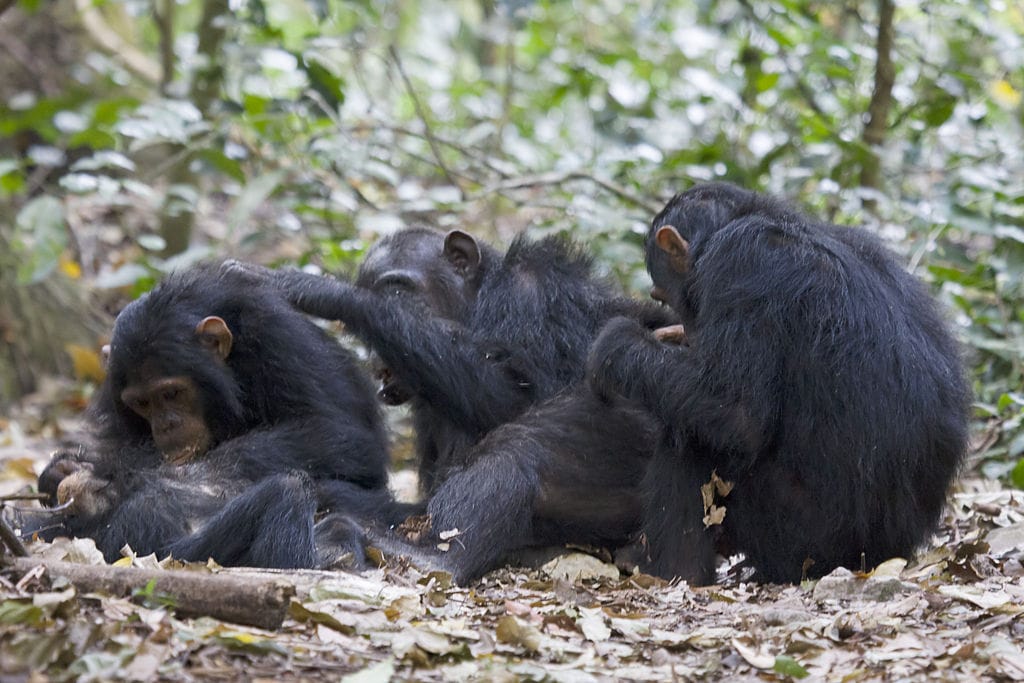 The study, led by researchers from the University of Michigan,  Arizona State University and Duke University in the U.S. and published Aug. 17 in iScience, looked at the close relationships that many male chimpanzees form and the possible reasons for such sociality.

The researchers found that males who create strong ties to alpha males, or who form large networks or alliances with other males, were more likely to father babies.

“There haven’t been many studies that look at how sociality is related to reproductive success,” lead author Joseph Feldblum, assistant professor of anthropology at the University of Michigan,  told Mongabay. “[W]hat’s new about this one is that we have managed to move towards identifying the mechanisms behind it, and finding independent mechanical links between sociality and reproductive success.”

The study used behavioral and genetic data from a group of wild eastern chimpanzees (Pan troglodytes schweinfurthii) in Gombe National Park, Tanzania. The animals are part of a long-running study in the park begun in 1960 by the British primatologist Jane Goodall. (Goodall is a member of Mongabay’s advisory board.)

The researchers found that subordinate males that formed strong bonds with the alpha male had higher siring success, while, independently, males with larger networks of strong bonds also had higher siring success. The social bonds formed between males provided access to mating opportunities that they would not have been able to access without allies.

This bonding also brought other benefits, including improving rank within the group and turning potential male rivals into allies.

The findings are significant at a number of levels, the study’s authors and other primate experts say.

While there have been previous studies into the mechanisms behind female primate reproductive success, much less is known about the drivers of successful male siring. According to the researchers, this is the first study that demonstrates a link between males’ social relationships and reproductive success.

“For some time now there have been questions about this issue — why do we see animals, in this case chimpanzees, doing things like making networks of alliances, grooming alpha males, being friendly with other male chimpanzees? They must be getting something from it, some kind of benefit,” Feldblum said.

“The study is significant because we found that one of the benefits conferred by sociality was reproductive success,” he added.

“It is interesting that the findings show that kinship is not the only route to reproductive success for males,” Gráinne McCabe, head of field conservation and science at the Bristol Zoological Society in the U.K., told Mongabay.

“Previously a lot of research had been done on female chimpanzee reproductive success and that was clearly related to family ties, but now we are seeing that for males there are other strategies involved, so this is filling in some of our knowledge.”

The study could also have implications for conservation efforts for a species which now classed as endangered; at the subspecies level, the western chimpanzee (Pan troglodytes verus) is critically endangered.

“The findings have implications for conservation on at least two levels,” McCabe said. “[F]or captive populations, the study gives us more understanding of relationships and behavior, which could prove useful ahead of any plans to release those individuals back into the wild.

“And in the wild,” she added, “if we understand the optimal group size for these types of relationships, then we could extrapolate to the range size needed for such groups to ensure reproductive success. This could be a factor in protected area management for chimp habitats.”

“Any study increases our understanding of a species,” Feldblum said, “so there is probably an implication from the study for effective management of captive chimpanzee populations, not to mention that studies like this can also help raise awareness of how broad the suite of a species’ behavior can be, giving that species attention.”

The study’s limitations, however, mean its implications for conservation efforts are also probably limited, according to Alex Piel, a primate specialist at University College London. Among the limitations: the authors note their research relied on observational data and they were unable to confirm a causal relationship between male sociality and reproductive success, as well as the  relatively small number of subjects (32 males and 26 female chimpanzees).

Piel said the findings still open a path for further related studies that could contribute to the development of strategies to help the primates.

“What would be perhaps useful from a conservation perspective would be further studies on this with more communities observed, over long time periods, to see whether the same social behavior links pointed to in this study are there in other studies,” he said.

He added that other factors, such as population density, how isolated a population is, or external strains on resources, might have an effect on the social behavior of chimpanzees, including bonds formed by male chimpanzees and possible subsequent siring success.

Feldblum said he and his team have already begun further studies.

“We want to do a follow-up, to look at what the exact mechanisms are that lead to the siring success,” he said. “There are mechanisms within mechanisms, we want to know what is driving one action that leads to another action.”