Four arrested in Kanungu over killing of six lions (Uganda)

By NewsroomMarch 25, 2021Law & legislation
No Comments 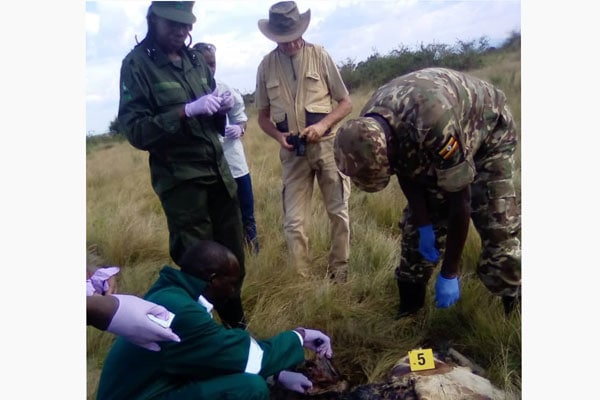 This photo taken on March 20 shows investigators examining carcass of a lion in Queen Elizabeth National Park on Saturday. Image: As originally published by Daily Monitor.

A day after the Uganda Wildlife Authority (UWA) placed a Shs10m bounty on suspected killers of six lions in Queen Elizabeth National Park, four people have been arrested.

The suspects, who include a 68-year-old, were arrested on Monday night during a joint operation mounted by UWA, UPDF and Police in Kihihi Sub-county, Kanungu District.

The lion carcasses were found with most of their parts missing. Eight dead vultures were also found at the scene, which pointed to possible poisoning. The lions were killed, beheaded and parts buried under a tree, according to UWA.

How suspects were netted

“Today at day break, the suspects took the security team to a location where three heads of lions were found hidden in a tree and the fourth one was buried with 15 legs under the same tree,” UWA communications manager Bashir Hangi said in a statement yesterday.

According to Mr Hangi, the suspects admitted to committing the crime.

“The suspects said they dropped one leg in the park. Three bottles containing chemicals commonly known as Furadan and a two-litre jerrican of lion fat oil were recovered placed in a banana plantation. Two spears, one panga and one hunting net were found hidden in a garden at the home of one of the suspects,” he said.

The suspects will be arraigned in the courts of law, Mr Hangi told Daily Monitor as he hailed the security agencies and Kanungu District leadership for playing a key role in the arrests.

“We applaud the security agencies that joined the operation to hunt the people behind the death of our lions and the leadership of Kanungu District for the support extended to the security teams,” he said.

“We assure the public that we shall continue to strengthen the protection of lions and other wildlife in Uganda and will pursue this case until justice for the dead lions is served. Our national parks remain safe and attractive to visitors and we still have lions in Queen Elizabeth and other parks,” Mr Hangi added.

Following the death of the lions, security and UWA officials organised a meeting yesterday with the local leaders in a move to understand how the incident occurred, and to deliberate on measures to safeguard wildlife.

Samples were extracted from the carcasses of both lions and vultures by doctors and taken to Kampala for further examination to ascertain the type of poison used.

According to a Uganda Wildlife Trafficking Assessment report released in 2018, Uganda was identified as one of the common transits of wildlife products in the Central and East African regions.

Uganda Wildlife Authority (UWA) last year reported that poaching cases doubled during the lockdown which was put up as a way to avoid the spread of Covid-19.

This has been a devastating blow to the tourism industry. Between February and June last year, 367 poaching cases were recorded across the country which is higher than 163 cases recorded during the same period in 2019.