The High Court Registrar Flavia Nabakooza has issued an injunction barring Captain Joy Roy the owner of Zziwa Rhino Sanctuary from accessing his farm and carrying out any additional development on it.

The injunction dated November 21, 2019, also barred Capt. Roy from accessing his home, the hotel that he set up on the ranch in Nakasongola district.

The decision by the court to issue an injunction comes hardly a month after President Yoweri Museveni met the warring parties who included Capt Roy, his family and Rhino Fund Uganda (RFU) led by its Executive Director Angie Renade. The President directed the disbandment of the current board of the Rhino Fund Uganda (RFU) and the constitution of a new team of directors aimed at ending the impasse over the ownership of land and management of Rhinos at the Zziwa Rhino Sanctuary in Nakasongola.

The board was expanded from the initial seven to nine members with and RFU having four representatives, Capt. Roy would have 3 representatives while the Government would be represented by two members. The President directed his legal team at State House to draft a Memorandum of Understanding to be signed by the two parties to guide their future working relationship. Under the MOU, Capt. Roy was supposed to have entered into joint management with RFU and equally share all revenues generated from the project. 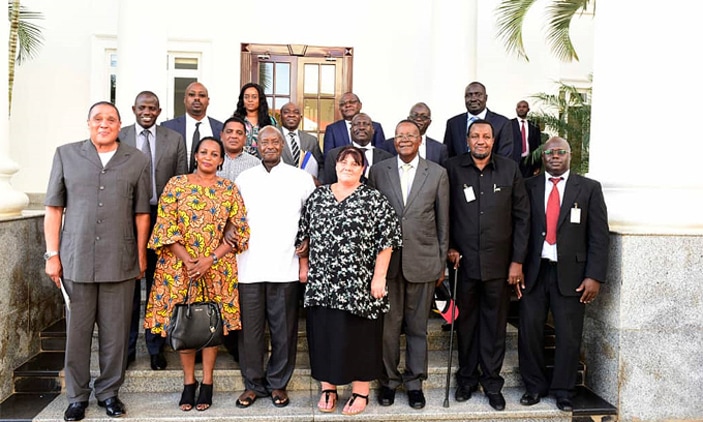 The President’s final intervention was meant to put to an end an acrimonious fall out between RFU and Capt. Roy who was embroiled in a litany of court cases over the management of the Rhino sanctuary. Capt. Roy accused Genade of attempting to grab his 16,000 acres of land he had leased to RFU while Genade accused Capt. Roy of wanting to evict her from the ranch.

However, the new injunction now means that the fight over the Rhino Sanctuary is still on. Joy Adoko, the lawyer representing RFU confirmed they had secured an injunction restraining Capt. Roy from accessing his ranch and interfering with the management of the ranch.

“Yes it’s true we went to court and secured an injunction against Capt. Roy,” she said.

Asked why they had insisted and went to court after Museveni met the warring faction, Adoko noted that the meeting with President Museveni did not talk about withdrawing the court cases that had been filed against Roy.

Shortly after Museveni met the warring factions, he wrote to the head of the European Union Attilio Pacific indicating that they had resolved to settle the matter amicably.

“As you may be aware, Rhino Fund Uganda has been involved in a dispute over land where the Rhino Sanctuary sits. Following my intervention, Capt. Roy representing Zziwa Ranchers together with the Rhino Fund Chairman and other representatives agreed to resolve all the disputes and maintain a Rhino Sanctuary on the land with the support of the Government,” the President noted.

He noted that the parties “agreed to execute a memorandum of understanding that will further govern their relations,” the President stated.

However, Capt. Roy’s lawyer, Richard Omongole noted that as they were waiting for the MOU to be signed they were shocked with an injunction issued against their client.

“It is clear that they wanted to engage us into a meeting to buy time as they tried to seek out funds from donors under the pretext that the case had been resolved. This is unfair to our client who not only invested in purchasing the land using his own resources, set up the entire infrastructure in the sanctuary and now he has been chased away by the same people he leased to,” Omongole stated.

Omongole noted that his client was in advanced plans to set up an airstrip at the ranch and also set up a five-star hotel at the same facility. He also noted that the permit the Roy had given RFU for the use of the land had since expired.