By NewsroomMay 12, 2020Rescue and rehab
No Comments

The Rhino Orphanage, a project founded by Peet Cilliers and Arrie van Deventer in 2012, is the world’s first registered non-profit company that saves and rehabilitates orphaned rhino calves injured or traumatised by rhino poaching. 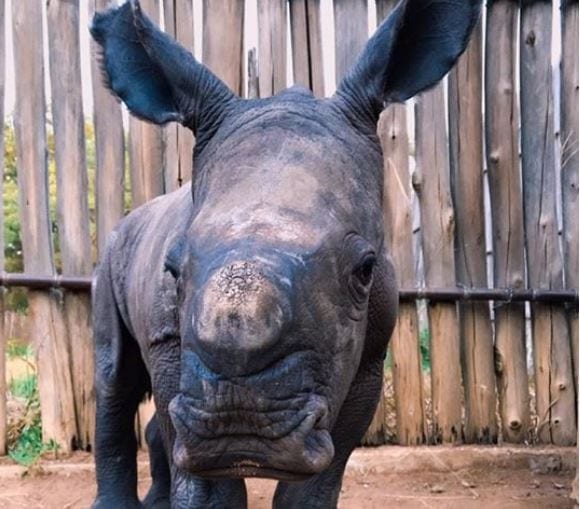 Photo as published by Bosveld Weekend Review. Mapimpi, the rhino.

The words Nthlo ya lerato, found on the logo, translates to ‘the house of love’, and aptly so too, as unconditional love is the dedicated mantra with which these animals are cared for.

Farm Manager Yolande van der Merwe, says in 95% of orphaned rhino cases, the mothers were killed by poachers.  The calves are most often left behind. “Not all calves, however, survive. Sometimes they were hurt so badly that they have to be put down”.

One of the small calves at the orphanage, Ntombi, is testimony of a good survival. She had been hacked 21 times when her mother was poached, the panga penetrating her skull. She was just two months old when she arrived at the shelter.

The orphanage is the first specialist, dedicated, non-commercial centre that cares for orphaned or injured baby rhinos with the only aim of releasing them back into the wild. It was created as the result of a lack of a specialised place for rearing baby rhinos left orphaned as a result of poaching.

“In 2011, one of our neighbours called for assistance. Two of his rhino cows were killed by poachers.  One had a young calf. The other rhinos were scattered all over the farm and Arrie was called in to assist with his helicopter to find the other rhinos,” Van der Merwe said.

After establishing there was no rehabilitation centre, the experience sparked Van Deventer to open the orphanage. He flew in experts who could advise him and, in the end, it proved to be a learning process to get the facility functional and safe for the rhinos and their carers. Van Deventer realised it would be a costly exercise and to this day, funds remain the biggest challenge.

For Van Deventer, saving just one calf makes the effort worthwhile. The four permanent staff members and many volunteers have seen many calves, of which 17 have been successfully released back into the wild over the years.

He is determined that the species won’t become extinct on his watch. “But we need all the help we can get. What will we tell our children, grandchildren and great-grandchildren if we lose this species? We are responsible for the animals. It is one of the proudest, most wonderful species in this world.”

Caring for the young calves is exceptionally hard work. Human carers have to sit with the young ones day and night. They are fed at all hours, are comforted, their bellies rubbed, and they are played with yes, sometimes carers end up with bruises too.  “The older calves take it really hard, calling for their mothers for up to two weeks,” said Van Merwe, “we can easily pull a 72-hour shift with two to three hours’ sleep”.

Readers can watch the antics of the calves and their carers on the Facebook page of The Rhino Orphanage.

During the lockdown, videos of the calves and their progress are aired – from their arrival at the orphanage to their everyday antics. It is truly worth a look to see the friendship between rhino calves Evie and Ryan, how the orphaned rhinos enjoy mud baths and just learn about socialising.  The antics of little Mapimpi, who was but a week old when arriving at the orphanage on 8 March, will warm your heart.

When the lockdown was announced, the volunteers from abroad had their visas revoked and had to return home. The situation has left the orphanage with some challenges as the younger calves need human carers day and night. Van Deventer advertised on social media, and received hundreds of applications from people willing to assist.

·        White rhinos are classified as near-threatened, while black rhinos are still seen as critically endangered.

For more information, go to https://therhinoorphanage.co.za/donate-adopt-a-rhino-calf.