Frome man’s mission to save critically endangered rhino – and he needs your help!

By NewsroomDecember 5, 2019Anti-poaching, Conservation
No Comments

Toby Nowlan, who has worked as an assistant producer on wildlife documentaries such as the BBC’s Planet Earth II and Netflix’s Dancing with the Birds, intends to travel to the Indonesian island of Java to track the endangered rhino.

He hopes to take high-resolution photos and field sketches to help raise awareness about the species’ plight. 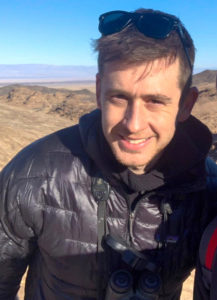 As well as launching a crowdfunding page, Toby will next month host an evening at Bistro Lotte, Catherine Street, where he will share his passion for the fight to save the critically endangered Javan rhino from extinction.

Toby said, “10 years in the making, my mission is to find one of the rarest animals on Earth, the Javan rhino. This is a rare and exciting opportunity, rarely granted to Westerners, to track these incredible animals in their natural habitat.

“There are so few images of the Javan rhino that we know less about it than all other rhino species. Poaching for use of their horns in Chinese medicine has driven all rhino species to the edge of existence. There are only 60 Javan rhinos left, surviving on the island’s last true wilderness, Ujung Kulon.

“I am enormously excited by the expedition’s prospective outcomes; establishing a long-running photo-identification catalogue project of the rarest large mammal on Earth, bringing its precarious situation back into the global media spotlight by capturing high quality photographs, publicising the species’ plight further by widely disseminating the sketches and paintings I create, and perhaps obtaining some of the only existing film of the species.

“They are a true icon of the wild, and saving them stands for protecting the last great wild creatures and places on our planet.”

Toby will host his evening at Bistro Lotte on Monday 6th January. Tickets cost £20 and include a dinner. The time is yet to be confirmed. Toby says, “Tickets are very limited and include a delicious Bistro Lotte dinner, book now to avoid disappointment, call in or get in touch on 01373 300646.” To support Toby’s crowdfunder, visit: www.gofundme. com/f/last-of-the-javan-rhino