By NewsroomMarch 24, 2020Conservation
No Comments

An index created by international animal welfare charity World Animal Protection ranks 50 countries and territories around the world from A (being the best) to G based on their animal welfare policies and legislation.

Vietnam attained an ‘F’ along with countries such as Myanmar, Egypt, Morocco, and Belarus.

Among 13 Asian countries in the index, Vietnam and Myanmar ranked far behind India and Malaysia (C), Thailand and the Philippines (D) and China, Indonesia and Japan (E). 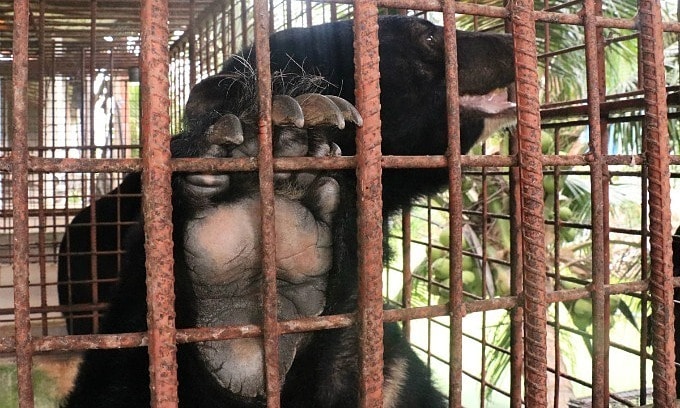 Original image as posted by VN Express: A moon bear is held in an iron cage in Tien Giang Province before activists came to rescue in June 2018. Photo courtesy of Animals Asia.

It said Vietnam failed to protect farming, draught and recreation animals with the government’s commitment to animal protection still being poor.

“Animal welfare legislation in Vietnam is characterized by a prioritization of human health and consumption. This has resulted in limited protections for animals in the country.”

Though some species are purportedly protected and cruel practices such as bear bile farming are banned, the report said these problems are ongoing.

Vietnam banned commercial bear bile extraction in 2005, but more than a decade later it remains a problem.

The country is home to the Asian black bear and sun bear, both listed as vulnerable by the International Union for the Conservation of Nature.

The extraction of bile from living bears is illegal in parts of Southeast Asia, including Vietnam, where it has been used for long as a remedy in traditional Chinese medicine.

“While livestock are protected from ‘ill-treatment’ there are no details as to what ill-treatment constitutes and there are no supplementary guidelines or regulations to govern the care, rearing, transport, and slaughter of different species.”

Vietnam has banned the trade in rhino horns, ivory and pangolin scales, but not effectively prevented their trafficking and consumption.

Ivory products and rhino horns are prized in the country for decorative purposes or use in traditional medicine. Many believe rhino horn could cure cancer and pangolin scales could be used to treat asthma and migraine and stimulate milk production in breast-feeding women.

Prime Minister Nguyen Xuan Phuc ordered the Ministry of Agriculture and Rural Development to “soon” draft a directive to ban these activities and submit it to the government no later than April 1.

It follows a call by 14 conservation organizations on the government to “identify and close markets and other locations where illegal wildlife is on sale” to prevent Covid-19. Vietnam has so far recorded 76 cases.

Sweden, the U.K. and Austria are rated the highest in the index with adequate policies and laws to protect animals. They scored a ‘B’, with no countries in the reporting getting ‘A’.